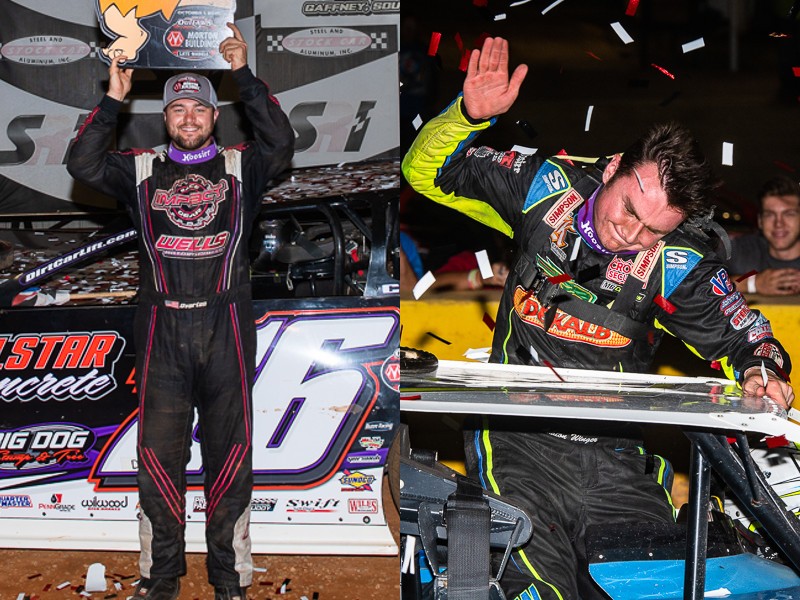 Brandon Overton was the winner on Friday night at Cherokee Speedway in Gaffney, South Carolina, while Ashton Winger topped the field at Georgia’s Senoia Raceway on Saturday night.

On Friday, Brandon Overton drove to his fifth series win of 2021 and 18th of his career in the Mike Duvall Memorial at Cherokee Speedway.

The Evans, Georgia driver lost the lead to Daulton Wilson on the opening lap, but took it back after a lap 14 caution, using a lap car as a pick to retake the point.

Overton had to search to find his best option on the racetrack before he could make another attempt at the lead.

“(Wilson) was good. I just kind of got back there to see where I’m better, or I’m worse,” Overton said. “He was just slidin’ up and kind of blocking my momentum, so I couldn’t really roll past him. So, I told myself just slow down and maintain.

“I think I seen (Brandon) Sheppard underneath me one time, and I was just like if I don’t go, he’s going to pass me, and I didn’t want him to get by me if the caution come out.”

Wilson finished in third, with Chris Ferguson in fourth, and Chris Madden in fifth.

On Saturday night, Ashton Winger led every lap en route to the win at Senoia Raceway.

It marked the Hampton, Georgia racer’s second series win of the season and the third of his career.

“We didn’t even know if we were going to get the chance to race. This thing was in a million pieces (Friday) night,” Winger said. “I felt like at the middle stage of the race I had a good rhythm, but early I felt like I was kind of dead in the water.

“When we got to lap traffic the first time, I didn’t feel as good as I needed to, so I’m glad everything worked out the way it did.”

Even though he led all 40 laps, Winger didn’t dominate the race. Chris Madden and Mark Whitener challenged the hometown hero for the lead on multiple occasions. Winger held them off by taking an aggressive approach to dealing with lap traffic.

“(Senoia) is one of the places where if you get bottled up behind someone for a lap, it’s half a second,” Winger said. “When I’m looking on the (scoreboard), and I see Madden on there, and Whitener and guys that are pretty good in this area, I can’t sit there and mess with (lap traffic) for very long.”

The World of Outlaws Morton Buildings Late Model Series returns to action on November 4-6 at The Dirt Track at Charlotte for the NGK NTK World Finals. For more information, visit WorldofOutlaws.com.