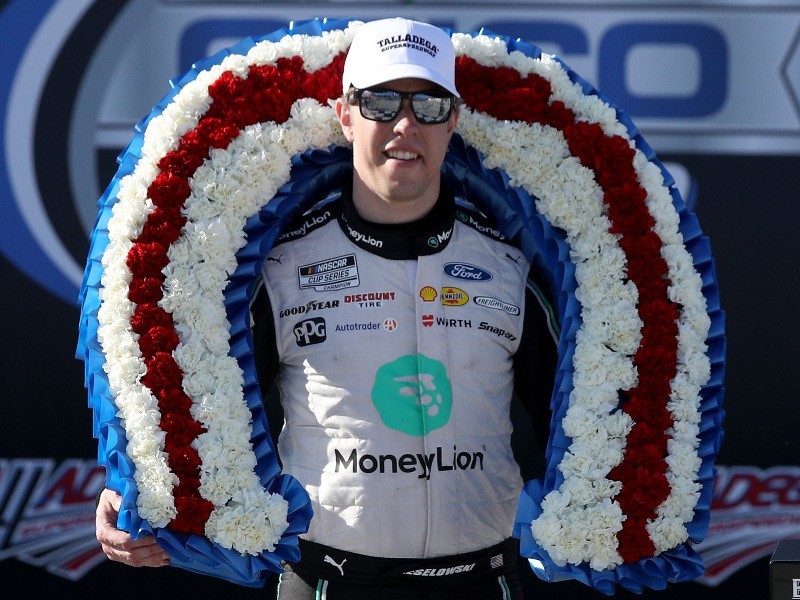 Sunday’s NASCAR Cup Series Playoff race at Talladega Superspeedway may be the great unknown for most competitors, but for those driving Fords, it could be a welcome opportunity.

Led by Team Penske, Ford drivers have dominated the recent action at NASCAR’s longest closed course, and that’s sufficient cause for optimism entering the YellaWood 500.

Fords have won 10 of the last 12 races at the 2.66-mile track, with Team Penske drivers Brad Keselowski, Joey Logano and Ryan Blaney accounting for eight of those victories. Blaney has won two of the last four events.

Over the last dozen races, the only cracks in the mastery of the Ford drivers have been Chase Elliott’s victory in a Hendrick Motorsports Chevrolet in 2019 and Denny Hamlin’s triumph in a Joe Gibbs Racing Toyota in last year’s Playoff race.

Though Talladega is a track many drivers dread because of the close-quarters drafting and potential for multicar accidents, Keselowski and Logano in particular may well relish the chance to improve their relative positions in the Playoff standings.

Coming off a workmanlike seventh-place finish in last Sunday’s Round of 12 opener at Las Vegas Motor Speedway, Keselowski is eighth in the standings, a mere four points ahead of William Byron, the first driver below the current cutline for the Round of 8.

Keselowski can point to six victories at Talladega, most among active drivers. He has led laps in 10 of the last 11 races there and has suffered only four DNFs (three for crashes) in 25 career starts.

Logano has three Talladega wins to his credit but has crashed out of the last two events. Given his current seventh-place position in the standings — just six points above the cutline — that’s a trend he hopes to end on Sunday.

In Logano’s view, the best way to accomplish that is for the Ford drivers to work together, whether they’re in the Playoff or not.

“Whether it’s a Ford in the Playoffs or a Ford out of the Playoffs, I think you’re going to see the Blue Ovals stick together and try to work out the best race possible,” Logano said. “I think that’s not only the best way to get yourself to the front, but it’s the safest way.

“If you have people that are on your side, and they’re not putting you in horrible positions, those are probably the cars you want to have around you. Most likely, that’s going to be a teammate or a Ford teammate — or maybe there’s just a few you can count on one hand that you can trust outside of that.”

Hamlin is the only driver who can view the YellaWood 500 with relative comfort. With his victory last Sunday at Las Vegas, Hamlin already has earned a spot in the Round of 8 without having to sweat out the final two races in the Round of 12 at Talladega and the Charlotte infield road course.

That’s a huge source of relief to the driver of the No. 11 Toyota, who doesn’t have a top 10 to show for his three starts at the Charlotte road course.

“Definitely — especially with the rest of this crazy round coming up,” Hamlin said. “Talladega and the ROVAL are places where you don’t always have control over your own result, so it’s good to know we don’t have to worry about what might happen these next two weeks.”

Series leader Kyle Larson is 57 points clear of the current cutline, but in 13 starts at Talladega, he has no top fives, only two top 10s and an average finish of 23.5.

NXS: Kaulig Racing Has The Cars To Watch In Talladega Xfinity Race

Kaulig Racing drivers have taken the checkered flag in the last three Xfinity races at Talladega, and that organization will bring its formidable superspeedway package to Saturday’s Sparks 300 at Talladega, the second race in the series’ Round of 12.

“Kaulig Racing is always fast at superspeedways, and this is one of my favorite tracks to go to,” said Justin Haley, who swept the two Xfinity races at Talladega in 2020 and has won two of the last three events at Daytona.

Headed for full-time Cup racing as Kaulig moves up to NASCAR’s top division next year, Haley will drive the No. 16 Chevrolet in Sunday’s Cup event.

Teammate Jeb Burton is the most recent winner at Talladega, as Kaulig extended its streak at the track in this year’s spring race. Burton could use another victory after falling 27 points below the current Round of 8 cutoff, thanks to a 36th-place finish last Saturday at Las Vegas.

“Our last trip to Talladega resulted in my first-ever Xfinity Series win, so I’m looking forward to getting back there,” Burton said. “The Kaulig Racing Chevys are always great at the superspeedways, so we know we’ll have some speed this weekend.

“We got ourselves into a little bit of a hole at Las Vegas, so I’m looking forward to getting back on track this week.”

“Ultimately, our goal for this weekend is to try and survive, get good points and make sure we don’t have to fight to make it to the next round the following week in Charlotte,” Allmendinger said.

“The Kaulig Racing cars will be hard to beat if we can all get up front and run together.”

Defending series champion Sheldon Creed is among those who will try to climb back onto the right side of the cutline when the series visits Talladega Superspeedway for Saturday’s Chevrolet Silverado 250.

Creed was wiped out in a late crash at Vegas that also eliminated Playoff driver Chandler Smith. Creed was credited with a 36th-place result and fell five points behind Matt Crafton — part of a 1-2-3-4 ThorSport Racing finish — in battle for the final position in the Championship 4.

Creed has one top 10 in two Talladega starts in the Truck Series, but he views Saturday’s race with optimism.

“I think we have a good opportunity to overcome last weekend’s mistakes,” Creed said. “Statistically, I’m not that great of a superspeedway racer, but I always enjoy racing on these types of tracks.

“I think that in order to be competitive on Saturday, we need to race aggressive from the start, but we can’t afford to get ourselves in trouble. If we can walk away with some solid stage points and a good finish, I’ll be a pretty happy guy as we look forward to inching our way closer to Phoenix.”

Regular Season Champion John Hunter Nemechek also had a rough night in Vegas, finishing 33rd after experiencing electrical issues on his No. 4 Toyota. Thanks to a large Playoff point cushion, however, Nemechek remains second in the standings, just six points behind current leader Ben Rhodes, who rose to the top of the grid with a runner-up result last Friday.

WDUN will carry live MRN Radio coverage of the NASCAR race weekend at Talladega Superspeedway, starting with Saturday's NASCAR Xfinity Series Sparks 300 beginning at 4 pm on 102.9 FM, AM 550 and streaming live on AccessWDUN.  Coverage continues on Sunday with the NASCAR Cup Series YellaWood 500 beginning at 1 pm on 102.9 FM and streaming live on AccessWDUN.