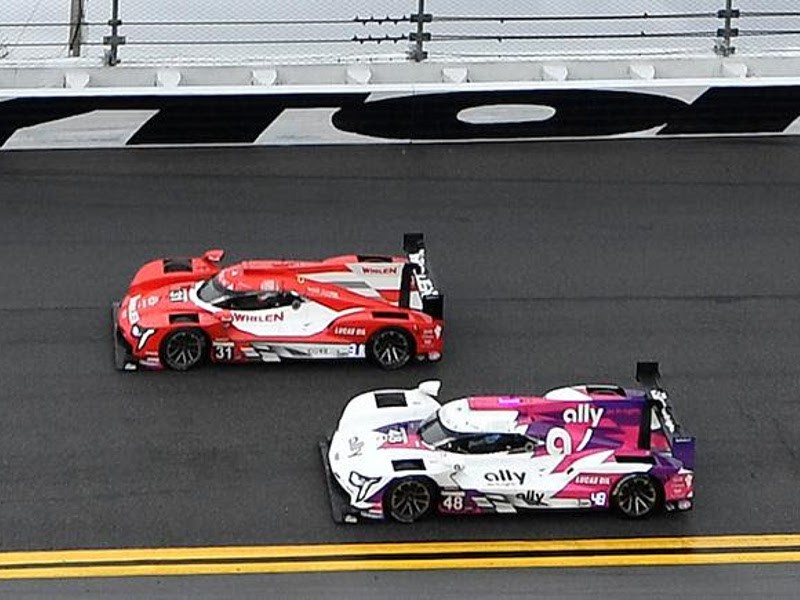 Chase Elliott and Jimmie Johnson will both be competing in this weekend's Rolex 24 at Daytona International Speedway. Elliott will compete in the No 31. and Johnson in the No. 48, both for Action Express Racing. Photo: IMSA Wire Service
Contact Editor

For all intents and purposes, NASCAR Cup Series champion Chase Elliott will be starting the 2021 season where he finished the 2020 season – out front.

Elliott’s No. 31 Whelen Engineering Racing Cadillac DPi-V.R team has won the pole position for the IMSA WeatherTech SportsCar Championship season-opening Rolex 24 At Daytona this weekend. And one of his primary competitors for the coveted new Rolex watch will be his former Hendrick Motorsports teammate, seven-time NASCAR Cup Series champion Jimmie Johnson.

The two NASCAR champions are in different cars competing for the same Action Express Racing team – a familiar situation for these drivers and their fans. And while this is Elliott’s debut in the acclaimed international season opener, it will be Johnson’s eighth try at Rolex 24 victory.

This is the second consecutive year that the reigning NASCAR Cup Series champion has competed in the Rolex 24 around the Daytona International Speedway road course. Kyle Busch raced in 2020, coming off his stock car title. Elliott revealed he actually had been working on a Rolex 24 ride since early 2020 – long before he qualified for the NASCAR Playoffs and a shot at the NASCAR trophy he ultimately took home.

“I think it’s a great thing,’’ Elliott said of the NASCAR participation in the Rolex. “I’m sure that outside of myself and Kyle there have been other champions with interest, but maybe the opportunities just didn’t align right.’’

That lineup and a strong car may well make this weekend the course correction for Johnson, who twice before (2005 and 2008) has finished runner-up in the Rolex 24. His last start came in 2011. New this time, Johnson’s seven-title NASCAR Cup Series-winning crew chief Chad Knaus will be on Johnson’s team pit box – serving as a race engineer in his own Rolex 24 debut.

Both Elliott and Johnson have had an exceptionally busy NASCAR offseason. Elliott, who won his first NASCAR Cup Series championship in November, made his Chili Bowl Nationals debut earlier this month. He didn’t advance to the finals of the storied midget class race in Oklahoma, but he finished fourth in his heat race and eighth in the B-Main.

“For me, I just felt like I wanted to try different things,’’ the 25-year-old Elliott said. “I’m still fairly young – in my 20s. I think as you get older, it just gets harder to learn new disciplines. I think while I’m at the stage I’m at, I’d like to step into other areas and learn different things.

“I think the more diverse you can be, the better you’ll be at the end of the day and the more equipped you’re going to be down the road. Just trying to learn as much as I can at the age I’m at. It’s a good time to do these things. I have good opportunities to go do them, so why not?”

Johnson, who retired from full-time NASCAR competition in November, has been busy testing IndyCars around the country for his transition to that series this season. He will run all the road course races for Chip Ganassi Racing in 2021.

“Things have changed quite a bit since I’ve been down here for a test session,’’ Johnson conceded of the Rolex 24.

“I’m probably the one (on his team) with the least amount of experience, so I’m getting more reps in the car at this point just to try to help with my comfort and confidence in the car,’’ Johnson said of his DPi work to date. “I’m out there having a ton of fun but certainly trying to make each lap count because they are so limited and I’m trying to learn as much as I can personally out there.’’

Elliott will share the No. 31 car with full-time WeatherTech Championship drivers Pipo Derani and Felipe Nasr, and World Endurance Championship driver Mike Conway. The car is widely considered to be the pre-race favorite. Should it win, it would mark the fourth overall Rolex 24 victory for the Action Express team and the first for the No. 31 Whelen program.

And while Elliott has been cautious with expectations because of his sports car learning curve, his teammates and fellow drivers expect legitimate contributions from the champ.

Nearly half of Elliott’s 11 career NASCAR Cup Series wins have come on road courses. His fifth and most recent road course victory actually came in the series’ first event on the Daytona International Speedway road course in 2020.

“I think that will definitely be a little bit of a help,’’ Elliott said.

Casey Mears – a former Hendrick Motorsports driver and the first full-time NASCAR driver to win the Rolex 24 overall in 2006 – agrees with the optimism. He absolutely expects Elliott to be a factor this weekend and to play a role in keeping the car in winning contention.

“He’s got a lot of talent and he picks up on things quickly, and the success he’s had on the road courses is definitely gonna help,’’ Mears said. “He’s going to get in that car and it’s going to be a little bit easier than it is in a stock car. That’s one thing I’ve learned over the years after driving a little bit of everything, I honestly believe that a stock car is one of the hardest cars you can ever drive. They aren’t really built to do what you do with them.

“If you look at IndyCars and some of the prototype cars, they’re purpose built to do what you do on the road courses. In a stock car, you just kind of adapt it to the best of your ability.’’

“And,’’ Mears added, “I think a guy like Chase, if he ran mid-pack on the road courses or struggled, then it might be a long road for him. But he’s done so well that he’s not going to have any problem at all adapting.’’

Both NASCAR champions have appeared visibly excited about the weekend’s opportunity. Their former Hendrick Motorsports teammate Jeff Gordon is the only NASCAR Cup Series champion to have won the overall Rolex 24 – earning a new watch with Wayne Taylor Racing in 2017 after he retired from full-time NASCAR Cup Series competition.

“I think that’s the cool thing about the Rolex in general,’’ Elliott said. “It brings together a lot of different disciplines into one race, obviously most being road course guys. I anticipate it’s going to be a challenge. I don’t think the race is going to be easy. Those guys that do that stuff all the time are very good at it and they spend all year long developing and working on the skills to go fast in these specific cars.

“A lot of us that don’t drive those cars all year long, jumping in there in their biggest event of the year is a tough thing. I’m just going to try to learn and learn fast and hope we can make it to the end.’’

Live coverage of the Rolex 24 kicks off at 3:30 p.m. ET Saturday on NBC. Throughout the 24 hours, coverage shifts to NBCSN, TrackPass on NBC Sports Gold and the NBC Sports App before returning to NBC at 2 p.m. Sunday for the concluding hours.