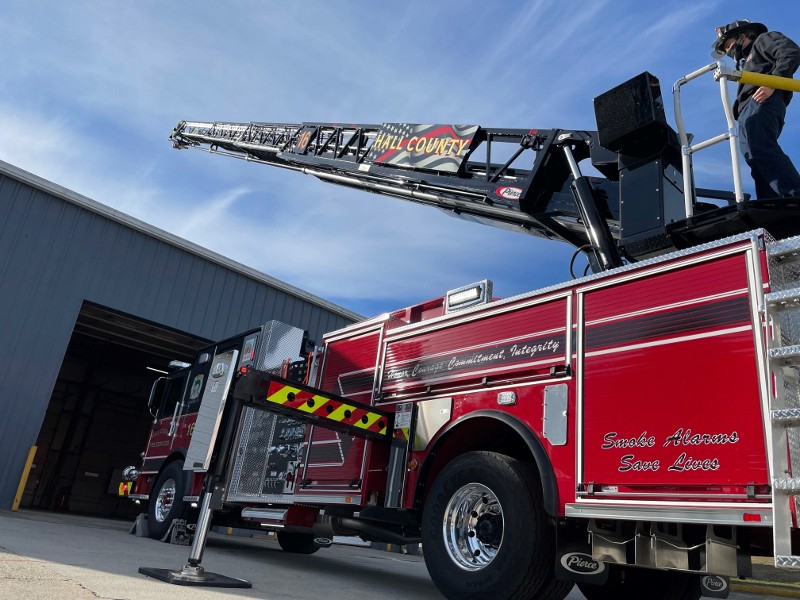 The nine trucks took ten months to construct at Pierce Manufacturing in Appleton, Wisconsin, and are arriving in Hall County this week.  Training on the new equipment has already commenced.

“The eight new pumpers and the aerial are actually in Georgia and we’re doing training on them this week, and hopefully we’ll be rolling those out in the next week or so to the stations,” Fire Services Assistant Chief Jerry Smith told Hall County Commissioners at their work session Monday afternoon.

“This replaces the majority of an aging fleet, which is expected to reduce our maintenance costs and assure reliable response performance for our citizens,” Hall County Fire Chief Chris Armstrong said in a media release this week.

“I would like to thank the Board of Commissioners and citizens of Hall County for their support of this department and this investment in strategic infrastructure,” Armstrong wrote.

According to Hall County Fire Service documents, Ten-8 Fire and Safety Company of Forsyth, Georgia, will configure the five new ambulances on Ford F-550 4X2 gasoline-powered chassis.  Total cost for the five ambulances is $1,526,370.  At present Hall County has sixteen ambulances in its inventory.

Smith told commissioners, “These are replacements but we are going to maintain six spare ambulances in our fleet for when things do break down, but we’ll get rid of our oldest units.”

He said the county has used Ten-8 Fire and Safety in the past and is very confident the new ambulances will arrive as expected and be available for use within ten months.

Smith explained that normal Fire Services policy is to locate any new equipment in the stations that historically have the largest number of calls, but that is changing as the department is growing rapidly and obtaining more and more new equipment.  “In the past if we were only replacing one or two units…we’d put them in the busiest (fire) houses because they are under warranty and that extends the life of the older units.”

“Now we are able to spread them out more,” Smith said.