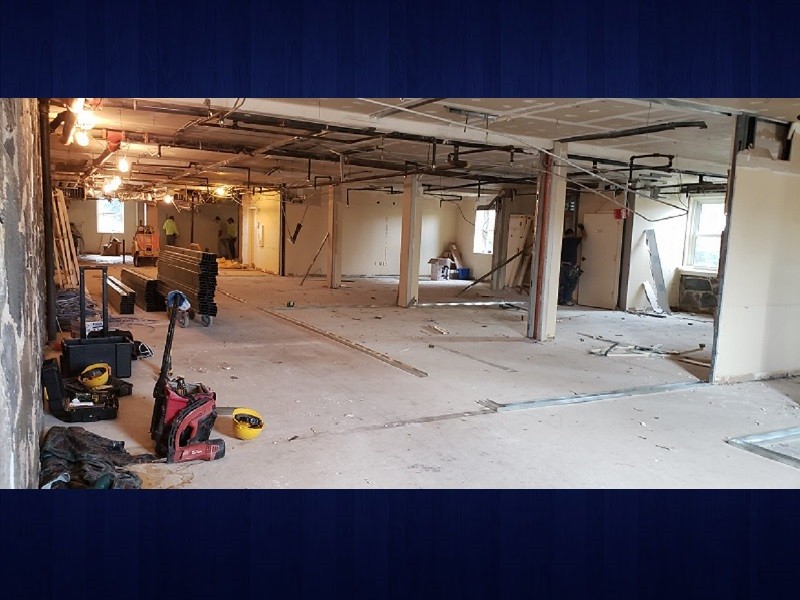 The Gainesville Civic Center is closed to the public through mid-March as the facility undergoes major renovations. Workers are making progress on changes to the first floor after just over a week of construction. (Photo: Gainesville Parks and Recreation)
Contact Editor

The Gainesville Civic Center is closed to the public through mid-March as the facility undergoes renovations, and it appears the facelift is moving along more quickly than expected.

Kate Mattison, Director of Gainesville Parks and Recreation, said workers began the job the first week in January, and she's been amazed to see the progress they've made in a matter of days. She said they're not slowing down.

"For example, right now below me, I can hear a wall being cut down," Mattison said during a Friday afternoon phone interview. She said the administrative and recreation staff are working from the third floor of the Civic Center as the work is underway, while registration for Park and Rec programs is being handled at the Frances Meadows Center.

Mattison said the biggest changes to the facility are being done on the first floor.

"We actually have some functional changes there where we took our old administrative offices and have ripped them all out...and we are creating three new meeting rooms in that space," Mattison said.

The public will also see improvements to the second floor where the ballroom is located.

"The ballroom is the heart of the building right? It's the most beautiful room that we have," Mattison said. "One of the big changes you'll see in the ballroom are two huge LED screens on either side of the fireplace. In addition, it's painting and new LED lighting throughout that will have a warmer look and a brighter look."

Mattison said there will be other updates, such as new sconces and refinishing of the hardwood floors in the ballroom. Those changes, along with improved audio-visual capability, should make the facility more attractive to groups who want to schedule larger events at the Civic Center.

Mattison pointed out this is the first major improvement project for the building since 1992, but even though the project is ambitious, it will be done in short order. Plus, the fact that the work is being done during the COVID pandemic is actually a plus.

"It honestly couldn't be a better time to do this work," Mattison said. "Rentals are low as it is, we've got limitations on how many people we can have in here anyway."

The cost for the project has been placed at approximately $1.2 million and it's being funded primarily by SPLOST VIII. Contractors include the Foresite Group, 2WR + Interiors, Weiser Engineering and Scott Contracting.