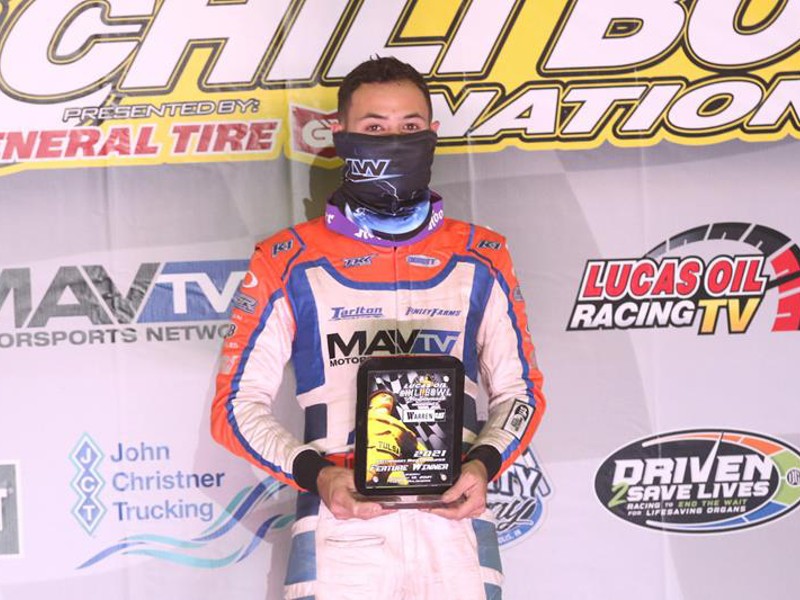 Larson trailed Thomas Meseraull on the start, with the pair battling for the lead until the caution came on lap 4 when third place Jonathan Beason made a hard hit to the wall in the second turn.

On the restart, Meseraull and Larson were joined by Shane Golobic, as the three fought for the top spot before the caution again slowed the action on lap 10.

Keeping pace through several consecutive cautions, the leaders began working through lapped traffic on Lap 16. Larson held the lead, with Golobic and Meseraull in pursuit.

Larson was under pressure from Golobic as the field raced towards the white flag, with Larson having the edge after Golobic tangled with a slower car. But a late caution flag flew, setting up a final restart.

With the green flag back in the air, Larson faced a final challenge from Meseraull, but the Larson was up to the task, crossing the finish line with a scant 0.395-second advantage.

Earlier in the night, Christopher Bell trailed early in the Vacuworx Invitational Race of Champions, only to blow the field away by 4.573-seconds. Cannon McIntosh, who led early, ended up second with Larson third on a last corner pass on Daum and Justin Grant.