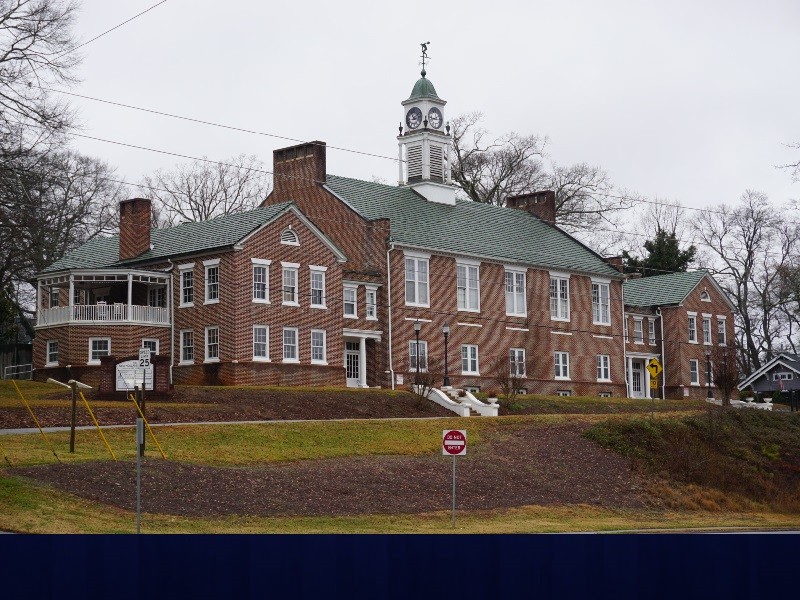 A New Year's Eve party inside this building in the New Holland community took a deadly turn when a man shot and wounded his wife and a co-worker and then turned the gun on himself. The man's death was one of five in the Gainesville-Hall County area related to domestic violence since Dec. 11, 2020. (Photo: Alyson Shields)
Contact Editor

Since early December 2020, five people have died in domestic violence incidents in the Gainesville area, and the violence has raised alarms for law enforcement and victim advocates.

In an crime that remains under investigation by the Hall County Sheriff's Office, two children were stabbed to death in a residence on Crescent Drive on Dec. 11, 2020, allegedly at the hands of their mother. Early on the morning of New Year's Day, Hall County and Gainesville law enforcement officers were called to investigate a crime on Spring Street in New Holland where a Gainesville man shot and critically wounded his wife and one of her co-workers at a holiday party. Then, just last week - on Jan. 6 - a man murdered a woman at a home on Vine Street in Gainesville and then killed himself.

Gainesville Police Chief Jay Parrish said the Jan. 6 incident compelled him to speak out to the community, asking residents to be more mindful of the danger that might be developing in their neighborhoods, their workplaces or even their own families.

"It's been a horrific month or so when you look at the cases," Parrish said. "We have five people dead from incidents that were extremely volatile and aggravated in nature and all stemmed from domestic violence issues."

Parrish said while the cases involving death get media attention, there are many more that don't make front page news, and those cases concern him, as well.

"I think a lot of times when we say domestic violence, we think of a boyfriend and girlfriend or a husband and wife and it's so much more than that," Parrish said. "It's siblings, it's family squabbles...we're also seeing now grown children with elderly parents where they're starting to abuse their elderly parents. It's a problem nationwide, it's certainly a problem in this community."

Parrish said it's time for community members to start recognizing signs of abuse and then taking steps to report their suspicions to law enforcement, even if they feel uneasy about doing so.

"I think those fears are natural, but it is our duty as a community," Parrish said, noting that any tips can be made anonymously. "It's far better for us to look into an allegation and it not be true than to miss one and end up with people that are severely injured or, in this case [Vine Street], dead."

During the ongoing coronavirus pandemic, Parrish said he and other officials in the community have noticed an unusual trend when it comes to domestic violence incidents. He said he and leaders with Northeast Georgia Health System and Gateway Domestic Violence Center sat down this past fall to compare notes.

"What we are seeing is lower reports of domestic violence, but between the Gateway Domestic Violence Center and the ER, we're seeing higher incidents," Parrish said. He thinks the fact that children are not in school is a big factor, since they're often the ones who share information about abuse with a teacher or counselor and then those school officials report the crimes to law enforcement.

"And the abuser is still in the house most of the time, so the abused victim is scared to call us," said Parrish.

"We're really looking at this as just a perfect storm for domestic violence," Butler said. "People are stressed about money and work, they're cooped up in their homes, they have children at home trying to do school at home...there's a lot of anxiety in general. You add all that to already volatile situations and it's escalating things for a lot of folks."

As a result, Butler said the shelter has remained full for months.

"We've stayed full almost all year and we've been relying on local hotels and other placement for folks when our beds are full," Butler said. Even so, she said she doesn't want space to be an issue for someone who needs help.

"If you're in danger, we want to help find you a place to go, and we can do that," Butler said.

Butler said the best place to start is with Gateway's Crisis Hotline where trained counselors are ready to talk around the clock every day of the week.

"We're not going to push anyone to do anything they're not ready to do. If they're just thinking about ending a relationship, we'll give the best advice we can at the time. People may want to come and meet with us and talk with us without actually living in the shelter, and that's great," Butler said. "We just want to be a resource however we can be."