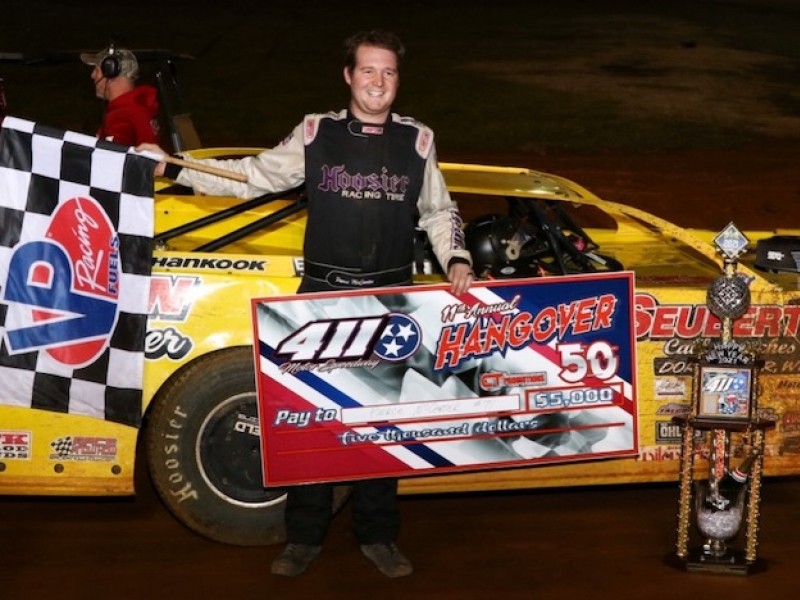 The Gatlinburg, Tennessee racer took home a $5,000 payday for the win in the 50 lap feature at the 3/8-mile high banked dirt speedway.

Cory Hedgecock would lead the field to the green flag, with Clay Coghlan and Dustin Linville in chase. McCarter was on the move early, as he powered past Linville and into the top three. As Coghlan began fading, McCarter moved to second.

McCarter and Linville swapped paint several times in the first half of the feature. The first caution of the day flew when D.J. Hayes slowed on the track, bringing the action to a temporary halt.

McCarter lost a couple spots on the restart, but he would make up ground when Linville’s car slowed going into turn three with mechanical issues.

On the restart, Hedgecock jumped the cushion in turn two, allowing McCarter and Drake Troutman to get by. Hedgecock would slow a few laps later with a flat tire ending his night.

Up front, McCarter held the lead for the rest of the feature en route to his first Hangover victory.

Christian Hanger finished in second, with Tommy Bailey in third, Troutman in fourth and Jimmy Sharpe, Jr. in fifth.