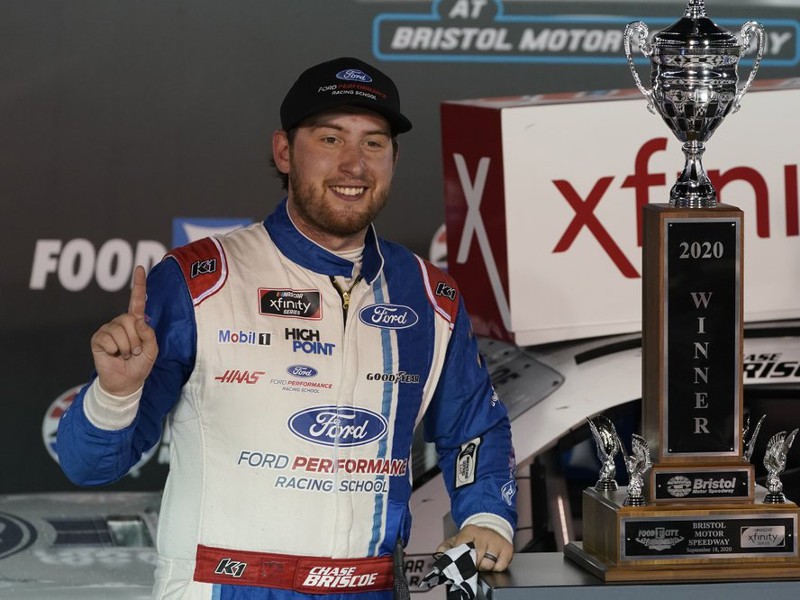 LAS VEGAS (AP) — Ross Chastain opened this week preparing for the start of the Xfinity Series playoffs and celebrating his promotion to the Cup Series. He is one of the lucky title contenders – he knows where he will be driving next season.

The Xfinity Series prides itself as the “Names Are Made Here” division of NASCAR and it fits this class well. Regular-season champion Austin Cindric wants a Cup Series ride, Chase Briscoe has made earning a promotion a priority this season, Justin Haley is being eyed for a seat at the top level and Chip Ganassi Racing just gave Chastain a Cup job for 2021.

The 12 drivers are all vying to become the first new Xfinity Series champion in two years – Tyler Reddick moved to Cup this season after back-to-back titles – at the same time many are also navigating a crowded job market.

“The whole ‘silly season’ has just been so confusing up to this point,” said Haley, a teammate of Chastain’s at Kaulig Racing who didn’t find out his friend was going to drive Ganassi’s No. 42 next year until it was announced. “I talk to Ross almost every day and the 42 news was, you know, news to us. I’m not sure where I stand right now.”

Spire Motorsports wants Haley, who won for the team in 2019 at Daytona in July, to drive one of its Cup cars next year but is still working on a deal as the Xfinity Series playoffs begin Saturday at Las Vegas Motor Speedway.

This year’s field is loaded with potential Cup drivers and should be a fierce race between Briscoe and Cindric, who have combined to win 12 of 26 events this season.

Briscoe began the year chasing eight wins because he believes that number will get him a Cup ride and he’s so far won seven races for Stewart-Haas Racing. Cindric this year proved he can win on ovals – his first three of five victories came at Kentucky and Texas – and was vocal this week in wanting his career to continue on an upward trajectory.

“Timing-wise, a move to the Cup Series would probably be the best thing for my development as a driver,” Cindric said. “I know what it takes to be fast and to execute in races ... that’s why I look at (Cup) as a potential option for me and probably the best-case scenario for me.”

Cindric drives an Xfinity Series car for Team Penske, where his father, Tim, is president of the organization. Team Penske could keep the 21-year-old Cindric in the Xfinity Series for a fourth full season or move him to Cup by either expanding its own program to four cars or assigning him to drive for partner Wood Brothers Racing. But this year has been a breakout for him: His five wins, 17 top-fives and 812 laps led are all career highs.

Briscoe has an uncertain future as he returns to Las Vegas, where he scored his first victory of the season in February. His deal to return to SHR for a second season relied on sponsorship that didn’t come together until the offseason and the organization has not said what it plans for Briscoe in 2021. Clint Bowyer is the only SHR Cup driver still unsigned for next season but the team has previously said it wants the veteran back. If Bowyer returns it would mean Briscoe, one of Ford’s driver development projects, would need to find a different Cup organization for next year.

The uncertainty is much easier for Briscoe this year because he’s a proven winner.

“Last year, I’d only won one race, so I’m not that pretty girl at the dance that everybody wants. Now that I’ve won seven races, I’m a lot more wanted in the sport,” Briscoe said. “If I can go win four or five out of these last seven, then obviously it makes the transition -- if I do move up or to want to move up -- makes me a lot more wanted by the bigger teams.”

Justin Allgaier and Noah Gragson, ranked third and fourth to open the playoffs, will be back in the Xfinity Series next season with JR Motorsports. It's less certain for Brandon Jones, winner of three races and ranked fifth for Joe Gibbs Racing.

Allgaier, who ran two full Cup seasons before returning to Xfinity in 2016, understands every driver situation is different and making the move to the next level needs to be carefully planned.

“It’s very circumstantial. We have seen a lot of guys make that transition, expectations were high and they didn’t meet those expectations," Allgaier said. "We’ve seen other guys that have made the transition and everybody says, ‘That’s a terrible idea. Why would you ever think that would be a great plan?’ And that driver goes in and exceeds expectations.”