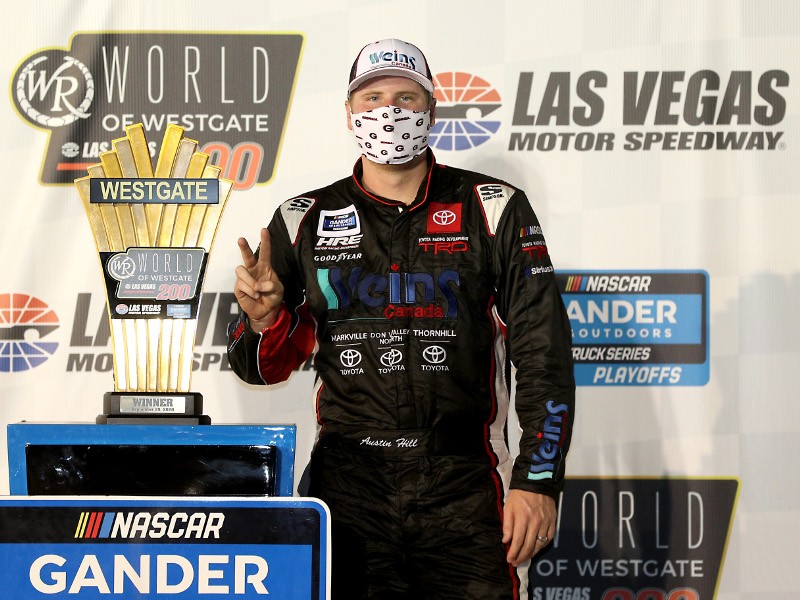 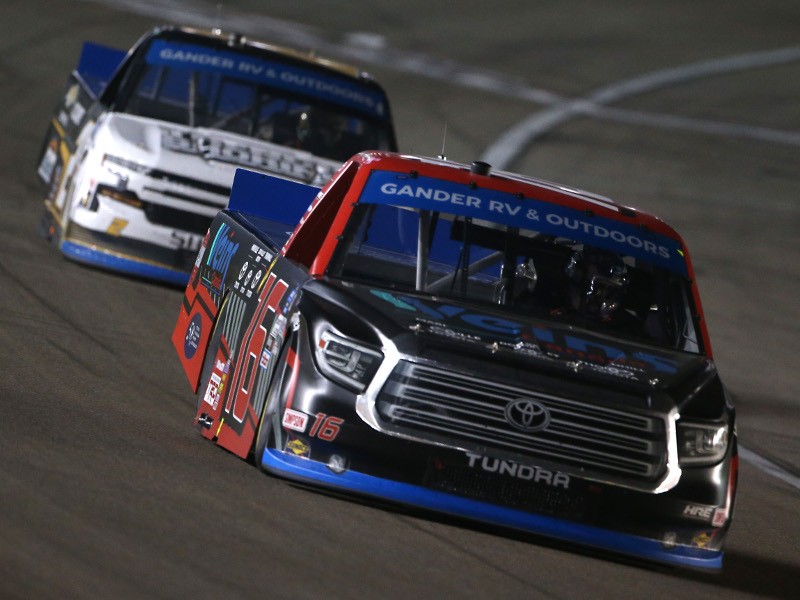 Hill took the lead for good on a restart with 39 laps remaining after jumping out ahead of the night’s most dominant driver Sheldon Creed. Creed led a race best 89 of the 134 laps but ultimately finished runner-up by .546-seconds.

“I was probably looking in my mirror more than I was looking out front,” Hill conceded of keeping Creed behind. “I knew he was better than we were and I knew I was going to have to protect.

“We didn’t have the best truck tonight, by no means,” Hill added. “We had to fight a lot of adversity in Stages One and Two. We weren’t good at all and (crew chief) Scott (Zipadelli) and the guys kept working on it and got better and better.

“The pit crew did a hell of a job on that last pit stop getting me in position I needed and I just had to go out there and get it and that’s what we did.”

With 11 laps remaining and Creed valiantly trying to catch Hill, his No. 2 GMS Racing Chevy truck hit the outside wall. He dropped from inside a second of catching Hill to falling more than a second behind. Yet he turned in an amazing push in the final laps to keep Hill honest.

It marks the second victory of the season for Hill and matched his Playoff win at Las Vegas last year. Most importantly, it gives Hill the automatic berth in the next round of the 2020 Playoffs. Entering the Las Vegas race, Hill had been ranked eighth of the 10 Playoff drivers – the final transfer position after a rare non-top 10 finish (25th) in last week’s Bristol Playoff opener.

The victory was that much sweeter for his team since his No. 16 Hattori Racing Enterprises Toyota truck carried a very special name for NASCAR’s “Honor a Cancer Hero” weekend. Hill’s truck honored “Torie Costa” Zipadelli’s 20-year old daughter, who passed away from cancer in 2015.

Creed certainly takes away some positives from the night, despite his heart-breaking ending. He swept both stage wins, besting Brett Moffitt in Stage 1 and Zane Smith in Stage 2 by a dominating 4-second advantage. The effort gave Creed seven stage wins on the season – most in the series.

As for the other Playoff eligible drivers, Todd Gilliland finished 14th, Brett Moffitt was 15th and Ben Rhodes – who spun out and brought out one of the race’s five caution periods, was 23rd.

The Playoff standings now show Hill with an automatic berth into the second round. Creed is ranked second, followed by Moffitt, Smith, Ankrum and Eckes. With his tough night, Rhodes dropped to ninth place – six points behind Eckes with one race remaining to set the eight-driver second round field. Gilliland is 10th – 19 points behind Eckes.

This round went to Daly, who finished 18th in his NASCAR Gander RV & Outdoors Truck Series debut. Pastrana’s truck suffered a couple of early race setbacks and he went down a lap at one point, but rallied to a 21st place finish.

The next race – and final first round competition – is the Talladega 250 at Talladega Superspeedway next Saturday.

*Locked into the Round of Eight