Warriors hold off Raiders, move to 4-0 for first time since 1975 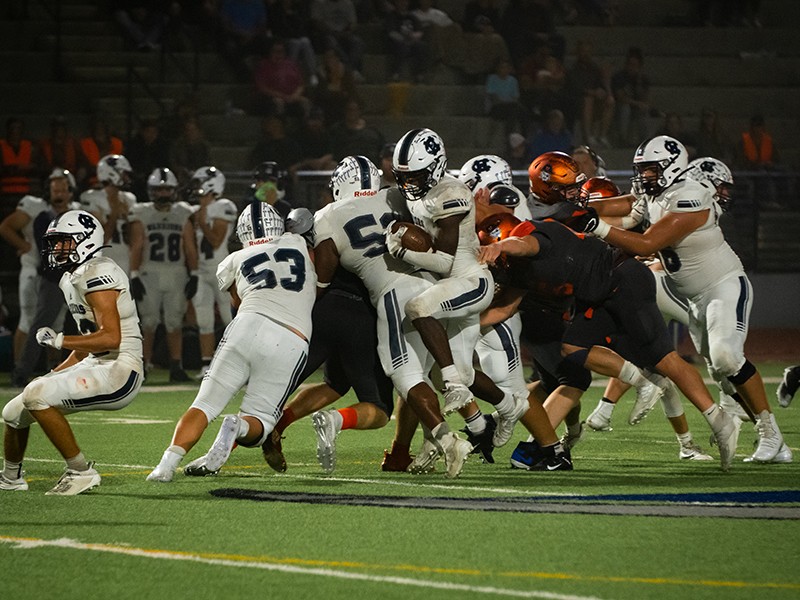 MT. AIRY  — It was billed as a classic offensive shootout. Instead, the White County and Habersham Central defenses stole the show.

The Warriors shut down the Raiders powerful ground game in the second half, including getting a pair of critical stops on fourth down, to help White County take a 28-21 win at Raider Stadium Friday night.

Habersham quarterback Joshua Pickett broke a 14-14 halftime deadlock on the opening play of the third quarter racing 60 yards for a touchdown and a 21-14 lead. But the Warriors defense, which had been torched just two weeks earlier by Hart County’s ground game, stiffened from there.

The White County defense sacked Pickett on the Raiders’ next possession forcing a punt and after a more than seven minute drive, twice the Warriors stopped Pickett and the Raiders, including once at the Warriors 5 to end the third quarter.

In between, White County senior quarterback J Ben Haynes rallied his offense. He converted a 4th-and-5 and then later scored on a 4-yard run to tie the game at 21. Following the sack of Pickett, the Warriors responded again with Haynes racing 41 yards down the sideline for another score and a 28-21 lead late in the third quarter.

The two offenses managed to churn out the yardage combining for nearly 800 total yards. But finding the end zone at crucial times proved difficult.

Habersham Central had 399 yards behind another huge game from Pickett, who had 213 yards rushing and 158 yards passing and three total touchdowns. Pickett also scored on a run of 63-yards in the first half. But Class 6A leading rusher Jackson Clouatre was held to just 28 yards on 9 carries for the game. Austin Wood had 3 catches for 66 yards and a touchdown for the Raiders.

The Warriors piled up 394 yards behind Haynes, who had 183 yards and three scores rushing. Silas Mulligan added 118 yards and a touchdown on the ground for White County.

The key drive, however, was the Warriors chewing off more than seven minutes to open the fourth quarter. After the defense stopped Pickett at the Warriors 5 to end the third, Haynes engineered a drive to the Raiders 19, that ended with a 36-yard Andrew Pierce field goal attempt being blocked.

But the White County defense twice in the final five minutes forced an incomplete Pickett pass on fourth down and then another sack and a penalty forced a 4th-and-25 and another incomplete pass. Haynes and the offense then ran out the final minute to push the Warriors to 4-0 for the first time since 1975.

Habersham Central fell to 2-1 with the loss.