Game of the Week: White, Habersham set to clash in potential shootout 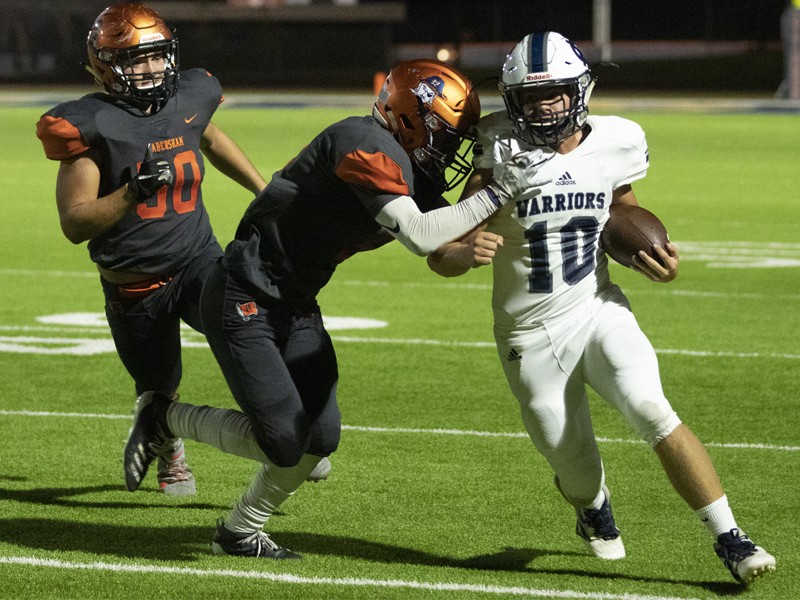 MT. AIRY — When two of the state’s top offenses battle each other, it screams a high-scoring affair.

And when White County and Habersham Central renew the annual rivalry on Friday, the stat books might need a few extra pages.

White County rolls into Raider Stadium on Friday as the top-scoring team in Class 3A (45.3 points per game) and Habersham Central has the third-best offense in Class 6A (41.5 ppg) setting up a possible epic showdown in the annual rivalry.

“Our guys have been playing with these guys or against them since they were 6 years old,” White County coach Tim Cokely said, whose team is 3-0 for the first time since 2017. “That’s what brings the intensity. As far as offense and defense go, I think it’s more that it’s a rival team and both teams are playing well. So, I think all those factors will make it an exciting game.”

The two foes are set to kick off on Friday at 7:30 p.m. in what could be the best game in the northeast Georgia area.

Habersham Central coach Benji Harrison, whose team is 2-0 for the first time since he took over the program, said he didn’t realize how big the rivalry was until he took the job.

“It’s gotten better each year,” Harrison said. “Our kids talk about them. I'll talk about their players in numbers and our players know all their names, so there’s a lot of familiarities. I didn’t know how big of a rivalry it was when I got here, and it’s turned into a good one. Our kids get excited, I know their kids do. It’ll be a great atmosphere Friday night."

The last two games in the series have been nothing but exciting. In 2018, the Raiders rallied back to get the win 34-20, and last season, the Warriors mounted a comeback only to fall short 42-28.

“It’s just an anecdote for what each year is going to be when you play these kinds of games,” Cokely said. “When it’s us and North Hall and us and Habersham, it’s just going to happen. Coaches do more in these types of games to open up the offense, maybe an extra wrinkle here or there. You know, when you have the level of intensity that any rivalry has, there’s always going to be energy. That energy can bring swings of momentum and the last couple of years, it’s been a back and forth game.”

The 2020 contest will be a showcase of two contrasting offenses. The Warriors bring in a more spread offensive attack, while the Raiders like to grind it out with the run game.

White County has senior quarterback J. Ben Haynes, who has accounted for more than half of the yardage this season (45-78-1, 633 passing yards, 4 TDs; 61-363 rushing yards, 6 TDs). He can throw, he can run, and he has a pretty good supporting cast around him.

“They are playing really, really well right now,” Harrison said about White County. “J. Ben is a really good player. When you’ve played as much as he has, he’s seen a lot of things, a lot of defenses, so he knows how to adjust and where to find the guys. But the thing that people don’t talk about much is he can run. If you worry too much about the pass, he’ll take off and hurt you with his legs.”

The Raiders have a two-headed monster on their hands, and Harrison is happy to have that problem. Senior running back and Class 6A rushing leader Jackson Clouatre (38-480 rushing, 4 TDs, 12.6 yards per carry) and Duke-commit and quarterback Joshua Pickett (10-for-29, 128 yards passing, 4 TDs; 27-274 rushing, 3 TDs) make the Raiders offense grind and shine. The two are averaging more than 377 yards a game combined, giving Habersham Central a potent one-two attack.

If the Warriors want to break the Raiders' two-game win streak, Cokely says the key will be his team’s ability to respond.

“We talk a lot to our guys, whether it’s during a play or after a play, we don’t them to react, because reactions sometimes cause mistakes,” Cokely said. “We want them to respond and to respond to situations presented to them. I think special teams are going to matter, covering kicks are going to matter. They always do, but they really do when the opponents have good speed – you’re kicking it to their track team. So, for us, that’s what it is -- it’s the situations, the special teams and covering kicks.”

Harrison, however, says it’ll take a solid defensive effort to slow down the Warriors this year.

“I don’t think you’re going to shut White County out,” Harrison said. “That would be great if we could do that, but I don’t think that’s the goal. I think it’s controlling them, not letting them get a rhythm, keep them off balance a little bit and we’ve got to make plays. We’ve got to do a good job of maintaining our lanes on defense and just do our job. They’re going to make some plays; they’ve made them on everybody. When that happens, we need to get ready to play the next snap and see if we can stop a drive that way.

We have to eliminate negative plays. If we can do that, it will allow us to keep doing what we’re are comfortable doing. So far this season, we’ve done a really nice job of taking care of the football. We have to make more plays than they do Friday.”

WHITE COUNTY at HABERSHAM CENTRAL
-- WHEN: 7:30 p.m.
-- TICKETS: $7 at the gate; 100 percent
-- WHERE: Raider Stadium, Mt. Airy
-- RADIO: 99.3 FM WCON; 93.9 FM WRWH
-- WHITE COUNTY (3-0, 0-0 Region 7-3A): Ranked 9th in Class 3A; defeated Pickens 42-7 last week
-- HABERSHAM CENTRAL (2-0, 0-0 Region 8-6A): ff last week; defeated Apalachee 56-35 two weeks ago
-- COVID PROTOCOLS: Masks are not required. Concessions will be available.
-- NOTABLE: Habersham Central leads series 7-3. The Raiders won 42-28 in 2019 in Mt. Airy. It is the fifth straight season the two neighbors have played with Hab Central winning two straight and 3 of last 4 overall. ... This should be one of the best matchups of the season in NEGa the way both teams have come out of the gate. It is the first 2-0 start for the Raiders since 2016 (Benji Harrison’s 2nd season) and the first 3-0 start for the Warriors since 2017 (Tim Cokely’s 1st season). ... The Warriors are the top-scoring team in Class 3A (136, 45.3 ppg) and sit 5th in the state all classifications in scoring for teams that have played 3 or more games. The Raiders are the 3rd highest scoring team in Class 6A (41.5 ppg) by average. ... The two offenses work differently and should offer a great contrast in styles and to the opposing defenses. The Warriors are doing most of their damage through the air behind J Ben Haynes (45-78-1, 633 passing yards, 4 TDs; 61-363 rushing yards, 6 TDs). The Raiders' ground game has been devastating behind QB Joshua Pickett and RB Jackson Clouatre. The two are averaging over 377 yards a game combined and will pose a huge challenge for a White defense (20 ppg) that gave up 47 points and nearly 400 yards to a similar Hart County offense. ... The Raiders are yielding just 20.5 ppg.