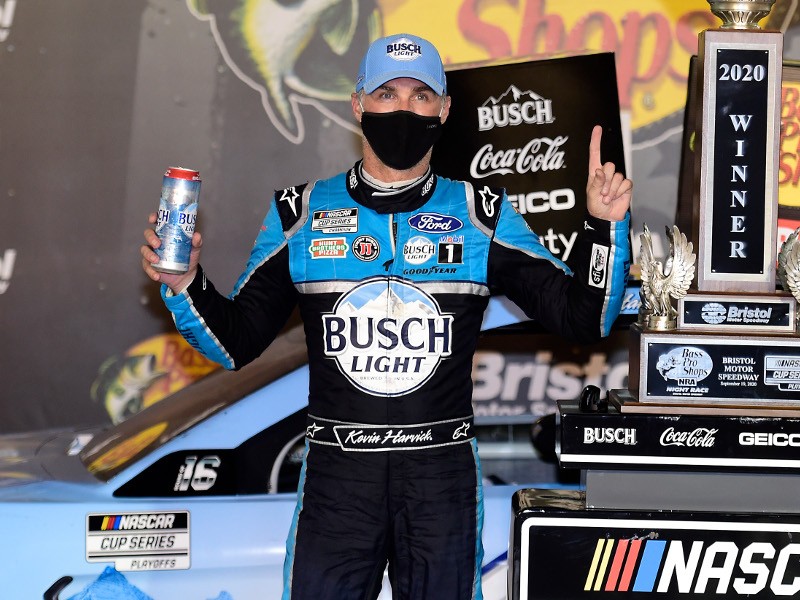 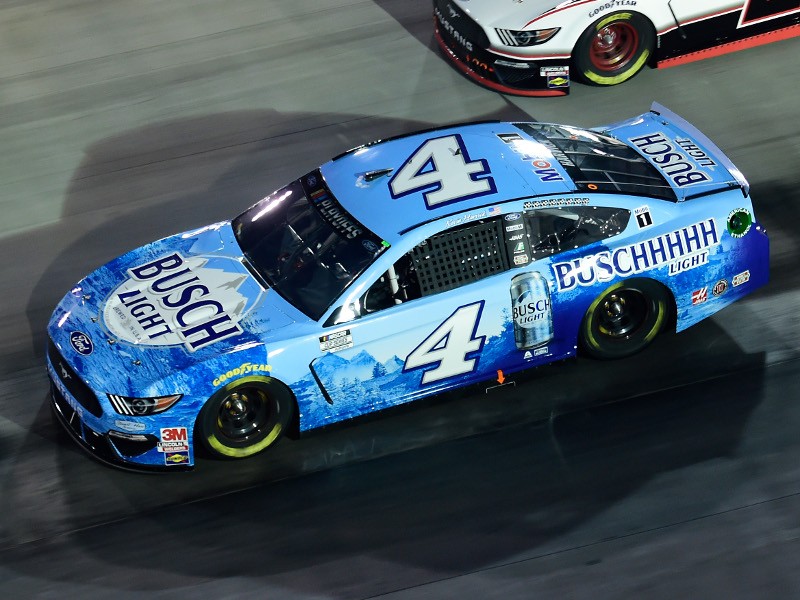 Kevin Harvick had to work hard for the win in Saturday night’s NASCAR Cup Series race at Bristol Motor Speedway.

With a hungry Kyle Busch charging behind him, looking time and again for the lead, Harvick held the measure of the defending series champion. Busch threw a Hail Mary with two turns to go, but Harvick held on for the victory.

It’s the ninth win of the season for Harvick, his third at Bristol and the 58th of his series career.

“To beat Kyle Busch at Bristol, I kind of got myself in a little bit of a ringer there,” said Harvick. “I hit a lapped car and got a hole in the right-front nose, but just kept fighting. We don’t have anything else to lose. We were here to try to win a race.”

With 60 laps to go, the duel began between Harvick in the No. 4 Stewart-Haas Racing Ford and Busch in the No. 18 Joe Gibbs Racing Toyota. Busch took the lead with 49 laps to go when Harvick got caught behind the lapped car of Reed Sorenson.

Harvick stayed on Busch’s back bumper. When Busch found himself trapped behind the lapped car of Joey Logano, Harvick retook the lead and tried to run away.

Busch would close back in on Harvick’s back bumper as the leaders continued to work through lapped traffic. With 10 laps to go, Busch began hounding him, looking on the inside time and again. More than once, Busch was able to get alongside, only to see Harvick pull away on the outside.

On the final lap, Busch again closed, and as the leaders raced into turn 3, Busch tried a high-side pass, but his car slipped off turn 4 as Harvick ahead to the checkered flag.

“I’m just so happy to drive this Busch Light Ford,” Harvick said. “I’m so happy to see all these fans in the grandstands. I was so jacked up when I got in this race car tonight to come here and just race and to be able to do that in front of people, that’s the enthusiasm that you get is from the crowd and I’m so excited for our team.”

For Busch, it’s another near miss and another chance to snap the ongoing win drought, which now stands at 29 races.

“Just didn’t have enough at the end,” Busch said. “The guys did a great job and gave me a really great piece tonight to contend and at least be up there and be close. Unfortunately, just didn’t have enough. Lapped cars were definitely a problem. It’s part of racing. You have to try to get around them where you can and there was just no room for me to do what I needed to do with a couple of those opportunities to get past them.”

The race within the race was the battle to remain in the Playoffs with Bristol serving as the cutoff race for the Round of 16.

Harvick was already locked in with a win two weeks ago at Darlington, while Busch made the cut easily thanks to his strong run, as did Richmond winner Brad Keselowski, who finished in 34th after battling issues with his car.

But the Playoffs are over for four drivers. William Byron saw his run come to an end when an on-track collision wiped out the radiator on his No. 24 Hendrick Motorsports Chevy, relegating him to a 38th place finish.

“I thought honestly we had a shot to run top-five or seven. The car was really, really good. We just needed a couple good pit stops. We were running probably ninth or tenth there. Just super disappointing – I’ve got to go back and watch that because that was kind of ridiculous.”

Cole Custer finished 23rd after getting some on-track damage.

“We just struggled here. I don’t know why,” said Custer. “I’ve always liked Bristol, it just hasn’t come together this year here. We’ve just really struggled. I just can’t thank everybody enough at SHR, everybody at HaasTooling.com, Autodesk. I just wish we had a better night. We were just a little bit off. I think we can hang our heads high on what we’ve done this year, but we still have a lot of races to win the rest of this year, so we just have to keep building.”

Matt DiBenedetto and Ryan Blaney both entered the night needing a win to make the cut. DiBenedetto was running in seventh with just a handful of laps to go, but had to pit with a cut tire, leaving him in 19th on the day.

“If we didn’t have bad luck, we wouldn’t have any luck at all,” said DiBenedetto. “I don’t know. It’s just frustrating. I hate it. I want to get Menards and Dutch Boy and this team a good run like they deserve because we’ve had a rough couple weeks, and had a loose wheel, overcome it – drive through the entire field with a lot of green flag. We get to seventh, hoping for a caution, but either way we drove to the top 10 – good run – and I was screaming, ‘Debris in 1,’ three damn times and we found it. We ran it over multiple times and I cut the right-rear down and it just ruins our day.”

Blaney was never really a factor in the race, finishing 13th at the end of the day.

“The track just swung really tight,” said Blaney. “I was kind of tight all night, but it just swung really tight on us and that was just the wrong direction that the track needed to be at. That stinks. I thought we got our car pretty close there in the second half of the race after the second stage, and then we were on the cycle of pitting and getting laps down and was on old stuff, so it was an unfortunate end for this 12 group, but I’m really proud of the effort this year and we’re not done.”