Bristol Playoff race may be last chance for Blaney, DiBenedetto 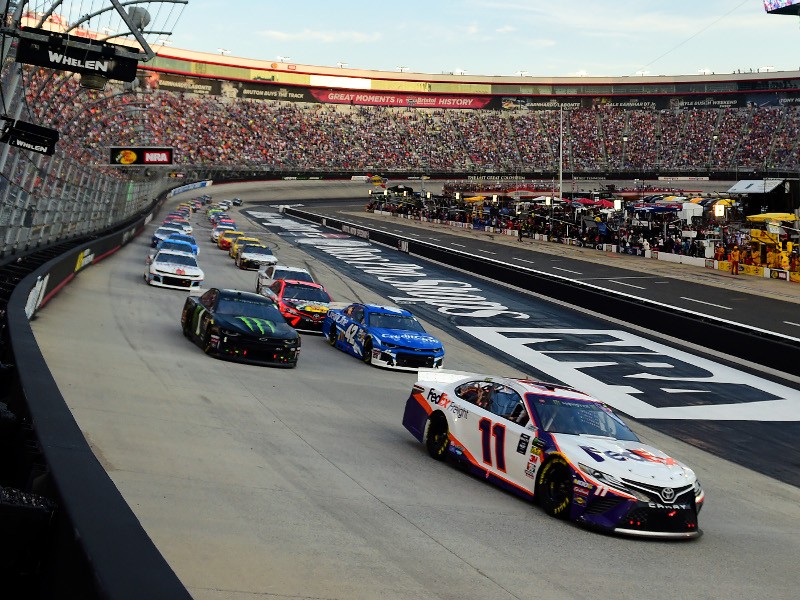 Denny Hamlin (11) leads the field into turn one at the start of the NASCAR Cup Series race at Bristol Motor Speedway on August 17, 2019. Photo: Jared C. Tilton/Getty Images
Contact Editor

The upside? Both Ryan Blaney and Matt DiBenedetto have shown excellent speed at Bristol Motor Speedway.

The downside? Neither driver has won a NASCAR Cup Series race at the .533-mile, high-banked concrete track, and that could be a problem with the first cutoff race in the Playoff set to run on Saturday night.

In all likelihood, Blaney and DiBenedetto will have to win the Bass Pro Shops Night Race to advance to the Round of 12. After self-inflicted wounds by the No. 12 team at both Darlington and Richmond, Blaney is 16th in the standings, 27 points behind Clint Bowyer in 12th.

The last driver to qualify for the Playoff, DiBenedetto is 15th, just two points ahead of Blaney, after running 21st at Darlington and 17th at Richmond.

The situation for both drivers, however, is not uniformly bleak. In his last five Bristol starts, Blaney has led a total of 439 laps, a testament to the speed in his Team Penske Ford. But Blaney will have to improve on his best finish of fourth at the track, a result he achieved in last year’s spring race after leading a race-high 158 laps.

The No. 12 team also will have to avoid the kinds of miscues that cost Blaney dearly in the first two Round of 16 races. At Darlington, Blaney’s car failed inspection and started from the rear after the team left extra ballast on the car. That issue was compounded later in the race when the pit crew inadvertently put right-side tires on the left side of the car and vice versa, requiring an extra pit stop to correct the problem.

At Richmond, Blaney also needed an unscheduled stop to tighten loose lug nuts on the left-front wheel. He never regained the track position he lost, as his 19th-place finish reflected.

Though it’s mathematically possible for both Blaney and DiBenedetto to earn a ticket into the Round of 12 on points, DiBenedetto already has adopted a must-win mind-set. In last year’s Night Race, DiBenedetto led a race-high 93 laps and finished second to Denny Hamlin by .502 seconds.

“If there is one track to be in a must-win situation that I would choose, it would definitely be Bristol,” DiBenedetto said. “I think we have a good shot at it. It’s one that I am excited about and have circled off in this round…

“And I have some unfinished business, I guess, after last year as well.”

After Saturday’s race, the Playoff field will be trimmed from 16 drivers to 12. Kevin Harvick and Brad Keselowski already have avoided elimination through their respective victories at Darlington and Richmond.

According to NASCAR’s loop data, Harvick has the fourth highest average driver rating at the track behind Kyle Busch (winless so far this year), Matt Kenseth and Chase Elliott, who won the NASCAR All-Star Race at Bristol earlier this season. Elliott’s average finish of 12.7 is best among drivers who have multiple starts at the track.

Xfinity Series Heads To Bristol With Playoff Spots Up For Grabs

As the NASCAR Xfinity Series heads to its Playoff cutoff race at Bristol Motor Speedway, many questions already have answers.

Austin Cindric clinched the regular-season championship last weekend at Richmond, with finishes of fourth and 10th in the doubleheader. With a remarkable charge over the past 13 races, a stretch that included five victories and an average finish of 3.92, Cindric overtook Chase Briscoe for the top spot in the standings, though Briscoe holds an edge in wins with six.

Together, the only two full-time Ford drivers in the series have dominated the action for most of the season, winning a combined 11 of the 25 races so far. Other than a potential victory and accompanying Playoff points — as well as establishing momentum entering the Playoff — neither driver has much on the line in Friday night’s Food City 300.

The same can’t be said of Brandon Brown, who enters the cutoff race with a comfortable 49-point lead over Jeremy Clements for the last of 12 spots in the Xfinity Series Playoff — if anything about Bristol can be said to be comfortable. Brown simply needs to avoid calamity to clinch the final berth—assuming none of the drivers below him in the standings manages to pull off an unlikely victory.

The chances of an upset win are remote, given the history of the series at Bristol. With the exception of Ryan Preece’s triumph in 2018, Victory Lane at Thunder Valley has been reserved for stars in the series and interlopers from the NASCAR Cup ranks.

Noah Gragson, who took the checkered flag June 1, and JR Motorsports teammate Justin Allgaier are the only two Bristol winners in the field for Friday’s race. Currently sixth in the standings, Allgaier has won three of the last six Xfinity races (including the last two in a weekend sweep at Richmond) and doubtless will move up when the Playoff field is reseeded on Friday night.

“I feel like our No. 7 team is hitting its stride at just the right time,” said Allgaier, who is tied with Cindric for most stage wins this season with 10. “Last weekend at Richmond was incredible and gives us some great momentum heading to one of my favorite tracks on the circuit.

“Bristol is a place that really suits my driving style, and the past few races (there), I feel like we’ve had the car to beat, but circumstances just didn’t work in our favor. Hopefully, we can get it done this weekend and end the regular season on a high note as we look ahead to the Playoffs.”

NASCAR Xfinity Series
Next Race: Food City 300
The Place: Bristol Motor Speedway – Bristol, TN
The Date: Friday, September 18
The Time: 7:30 p.m. ET
TV: NBCSN, 6 p.m. ET
Radio: PRN, SiriusXM NASCAR Radio
Distance: 159.9 miles (300 Laps); Stage 1 (Ends on Lap 85), Stage 2 (Ends on Lap 170), Final Stage (Ends on Lap 300)
What To Watch For: Bristol Motor Speedway has hosted 76 NASCAR Xfinity Series races, dating back to the inaugural event on March 13, 1982. The first Xfinity Series race at Bristol was won by former driver turned car owner/ FOX Sports 1 analyst Phil Parsons driving for car owner Johnny Hayes in a Pontiac. … The 76 Xfinity races at Bristol have produced 42 different pole winner and 42 different race winners. … Kyle Busch leads the series at Bristol in poles (six), wins (nine), and top fives (17). … The youngest series race winner at Bristol is Erik Jones (04/16/2016) at the age of 19 years, 9 months, 17 days and the oldest is Harry Gant (04/04/1992) at the age of 52 years, 2 months, 25 days. … 11 of the 76 (14.5%) Xfinity races at Bristol have been won from the pole or first starting position. … The most recent driver to win from the pole or first starting position at Bristol was Kyle Busch in 2017. … Bristol is currently on a streak of eight Xfinity different winners dating back to 2016. Two former series Bristol winners are entered this weekend – Justin Allgaier (2010) and Noah Gragson (2020).