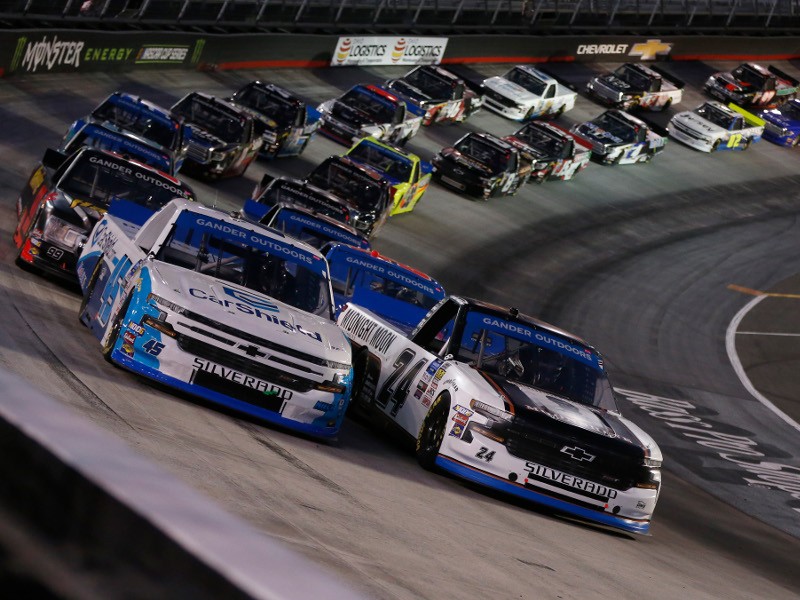 Gilliland and Ankrum are seeded ninth and 10th, respectively, entering Thursday night’s UNOH 200 at Bristol Motor Speedway. After the three races in the Round of 10, two drivers will be eliminated. Gilliland and Ankrum face an uphill fight to avoid being the two casualties.

For his part, Gilliland believes the answer lies in finding consistent speed in his No. 38 Front Row Motorsports Ford.

“I think people have noted the speed — we’ve been getting better and better,” Gilliland said during a video conference with reporters on Monday. “We’re not where we want to be week-in and week-out. We’ve kind of been hit-and-miss. There are some weeks, like Gateway, where we were the dominant truck. It’s hard to be that dominant in one of these races nowadays.

“I think if we can find that — and we’ve had glimmers of that every once in a while… we just need to do that more consistently, and I think that’s in the details of the truck, the setup and the notes that we’re building. I think we’re getting better and better every week still.”

Four of the Playoff drivers haven’t won a race in 2020, Gilliland and Ankrum among them. Top seed Sheldon Creed and Richmond winner Grant Enfinger lead the series with three victories each.

Brett Moffitt, the 2018 series champion, is the defending winner of the Bristol race. He and 2016 champion Johnny Sauter, who failed to qualify for the Playoff this year, are the only former winners in Thursday’s event.

NASCAR Gander RV & Outdoors Truck Series
Next Race: UNOH 200
The Place: Bristol Motor Speedway – Bristol, TN
The Date: Thursday, September 17
The Time: 7:30 p.m. ET
TV: FS1, 7 p.m. ET
Radio: MRN, SiriusXM NASCAR Radio
Distance: 106.6 miles (200 Laps); Stage 1 (Ends on Lap 55), Stage 2 (Ends on Lap 110), Final Stage (Ends on Lap 200)
What To Watch For: Since the inception of the Playoffs in the series in 2016, the 2020 season marks just the second time in series history that Bristol Motor Speedway will host the first race of the NASCAR Gander RV & Outdoors Truck Series postseason (2019-2020). … In total, Bristol Motor Speedway has hosted 22 NASCAR Gander RV & Outdoors Truck Series races, dating back to the inaugural event on June 23, 1995 – the event was won by Joe Ruttman driving a Ford for truck owner Mark Simo. … The 22 Gander Truck races at Bristol have produced 17 different pole winners and 17 different race winners. … Kyle Busch leads the series at Bristol in poles (four), wins (five) and top fives (seven). … The youngest series winner at Bristol is Ryan Blaney (08/19/2015) at the age of 21 years, 4 months, 19 days and the oldest is Joe Ruttman (06/23/1995) at the age of 50 years, 7 months, 26 days. … Six of the 22 Gander Truck races at Bristol have been won from the pole or first starting position. … The most recent driver to win from the pole was Brett Moffitt in last season’s Playoff race.