Game of the Week: Falcons, Red Elephants battle for bragging rights in Week 3 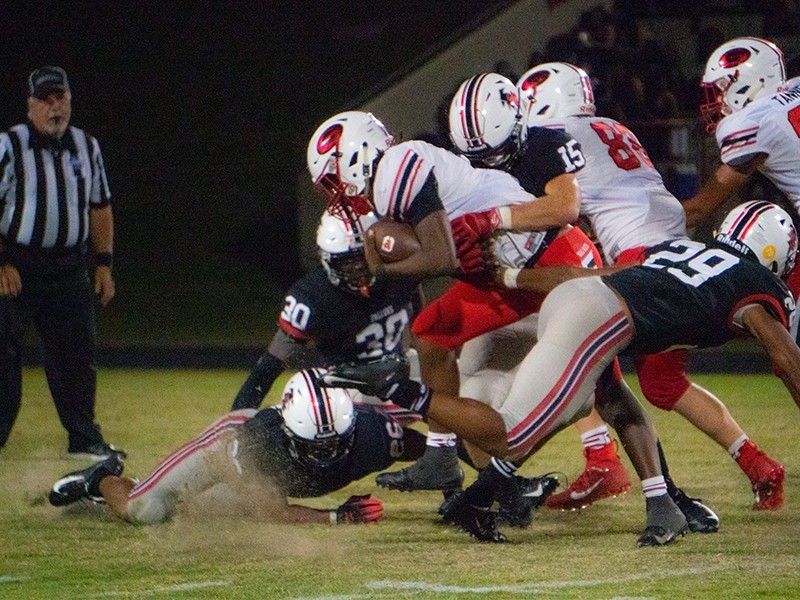 The Falcons will try to change that historical stat when they host the Red Elephants in front of a sold-out Falcon Field on Friday. The game can be heard live on FM 94.5 The Lake.

“It’s good to have a good Hall County rivalry game. The kids and the school are excited,” Flowery Branch coach Ben Hall said. “I’m sure all the banter is going back and forth on social media with student bodies. But it’s going to be a little thicker environment and that’s what you look to gain out of the preseason to get you ready for region games and the postseason. I like playing quality people and Gainesville is a quality opponent.”

Gainesville leads the all-time rivalry 10-5 in a series that hasn't always been played every year. It has been renewed three separate times, including one of the most memorable in 2012. The Falcons knocked off the Deshaun Watson-led Red Elephants, 35-34, and won the region title as Gainesville eventually went on to win the state championship. Interesting enough, current Gainesville coach Heath Webb was on The Branch coaching staff that year.

“I was fortunate enough to be on the other end when I coached at Flowery Branch in 2012 – the year that Gainesville won a state championship,” he said. “We actually won that game and the region championship. Gainesville goes on to win the state championship, but we still had the bragging rights of the fact that we won the game. So those things are important, and it’s fun. That’s what high school football is all about – my talent versus your talent – and when they’re in the same county, it just makes it even more fun.”

The Falcons were patient last season, slowly building a lead behind a grinding run game, mainly from Jaizen Ellingham, who finished with 149 yards and four touchdowns, and a bend but don’t break defense to beat the Red Elephants, 35-21.

But a young and rebuilding defense has been the biggest question mark in Flowery Branch, giving up an average of 40 points per game so far this season. The Falcons gave up almost 500 yards of offense and 42 points to Dawson County in Week 2. They were fortunate enough to have an experienced and explosive offensive unit to bail the defense out and rally back to beat the Tigers, 45-42.

“We have to help carry the defense along on the offense,” Hall said. “We were young offensively last year and now, the roles are reversed, and we have to shoulder more of the load on the offensive side of the ball. We’ve got to allow some of these younger guys on defense to feel comfortable when they’re out there and not think oh my gosh, I’ve got to keep this team from scoring and just go out and play.”

The Falcons' offense is much more balanced this season with David Renard back leading the offense, and Ellingham providing a stout rushing attack out of the backfield. Renard has completed 29 of 49 passes for 615 yards and two touchdowns, while Ellingham has rushed for 39 times for 200 yards and six touchdowns.

“He was thrown into the fire last year and didn’t bat an eye,” Hall said. “I was probably more like a protective parent I was scared to ask him to do too much too soon and get gun shy last year, but he’s gotten stronger, taller, faster and has a stronger arm this year. He’s ready for anything we ask him to do.”

Meanwhile, after the slow-start first quarter against Stockbridge in Week 1, the Red Elephants special teams turned the tide of the game and drastically shifted the momentum, blocking three punts, scooping two of them up for touchdowns, and Gionni Williams tossed a 42-yard touchdown pass for the third cash in.

“We truly believe that it is a third of the game,” Webb said. “We just felt like early on in the season that it could be a difference-maker, especially someone who had the talent level like Stockbridge does. We thought it could be a difference-maker for us to change the tide of the game and luckily it was. They had trouble adjusting, so we just exploited that weakness in their punt unit. Our guys did a great job.”

As for the Gainesville offense, not too much has changed -- Williams at quarterback, a really good rushing attack, receivers that can make plays and a massive offensive line that can move mountains.

In Week 1, Williams totaled 179 total yards of offense and three touchdowns, and sophomore running back Naim Cheeks providing the fireworks out of the backfield with 184 yards rushing on 15 carries and two touchdowns.

“Gionni and Niam are as quick as lightning,” he said. “If you give them a little bit of a seam, they can turn it into an explosive gain quick.”

Webb said they’ll have to play the Falcons a bit differently this season with more of a balanced attack.

GAINESVILLE at FLOWERY BRANCH
-- WHEN: 7:30 p.m.
-- TICKETS: GAME IS SOLD OUT!
-- WHERE: Falcons Field, Flowery Branch
-- RADIO: FM 94.5 (Click to listen live)
-- GAINESVILLE (1-0, 0-0 Region 6-7A): Off last week; defeated Stockbridge 49-23 two weeks ago on the road
-- FLOWERY BRANCH (1-1, 0-0 Region 8-4A): Defeated Dawson County 45-42 last week
-- COVID PROTOCOLS: Mask/face coverings and temperature will be required to get into the stadium. Masks should be worn at all times. Concessions will be prepackaged.
-- NOTABLE: Gainesville leads series 10-5. Flowery Branch won 35-21 in 2019 at home. The Falcons have won two straight but have never won three consecutive games in the series. ... The Falcons offense exploded last week and showed that it is capable of rallying from two scores down, which they did twice against the Tigers. They rattled off 21 unanswered points in the second half and then the defense held on. ... The late rally helped the Falcons avoid their first 0-2 start since 2013. ... However, the Falcons defense, which is inexperienced and in a major retooling mode, has allowed 40 ppg so far in the early going. ... The big takeaway for the Red Elephants in their opener was the special teams, which blocked three kicks, ran two of them back for TDs, and ignited their win over Stockbridge. The offense struggled early, but So. RB Naim Cheeks ran for 184 yards and the defense held Stockbridge to just 9 points in the second half.