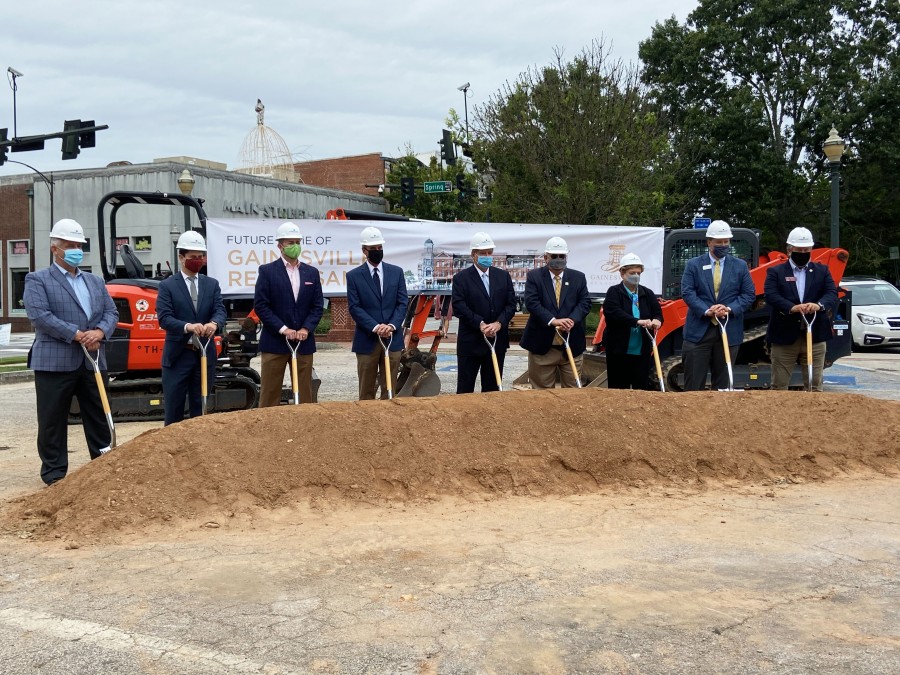 Elected officials and key stakeholders in the Gainesville Renaissance project participate in the official groundbreaking ceremony this morning.
Contact Editor

A crowd including representatives from local government, developers and schools gathered this morning in downtown Gainesville for a groundbreaking ceremony on the Gainesville Renaissance project.

The 60,000 square foot project, also known as the fourth side of the square, will replace the side of the downtown square currently occupied by a parking lot. The parking lot closed to public use this week.

Once completed, the project will consist of a three-story building and a “pocket park” for public use between the building and the Hall County Courthouse. The ground level of the building will feature retail and restaurant space, the second level will house Brenau University’s new Lynn J. Darby School of Psychology and Adolescent Counseling and the top level will be divided into approximately eight condominiums.

Prior to the official groundbreaking ceremony, several members of the community who have played an integral role in the project addressed the crowd.

Among the speakers was Gainesville City Manager Bryan Lackey, who emphasized the ripple effect that the project will have on the surrounding community.

“It’s the epicenter of everything else…it allows all of the other projects in close proximity to here and really in the city in general to reach their full potential,” said Lackey.

Many businesses and buildings have occupied the land where the project will be constructed. A Belk store occupied the property at one point before it was torn down and eventually replaced by the current parking lot.

In the summer of 2019, Doug Ivester, former chairman and Chief Executive Officer of The Coca-Cola Company and a New Holland native, purchased the land for development. Ivester spoke during the ceremony about how the project could create a lasting impact on community members.

To illustrate his point, Ivester used fictional characters of Beth, Miguel, Beulah and Mel- teenagers who are influenced by the project in some way to create a better life for themselves.

A couple of the characters in Ivester’s story are influenced by Brenau University staff inside of the Lynn J. Darby School of Psychology and Adolescent Counseling. Ivester spoke specifically about the potential positive impact these staff members could have on students.

“Giving that school a place to call home is extremely important for the development of the health and welfare of young people in the county, so I think that will be a lasting impact for decades to come,” Ivester said.

While the building will obviously be a new addition to the square, Fred Roddy, whose company Roddy Properties will oversee development of the project, said that the exterior of the building will reflect the time period that many of the other buildings on the square were constructed.

“The exterior of the project is reminiscent of the 1918 architecture, brick facade and cast stone,” said Roddy. “We wanted to do something that was reflective of that time period so that it would fit more readily into the square.”

Construction on the project will begin in the next few weeks. Visitors to the downtown Gainesville area can expect to see cranes and other construction equipment in the area.

The project has an expected completion date of winter 2021.