Will Power goes all out for Mid-Ohio IndyCar victory 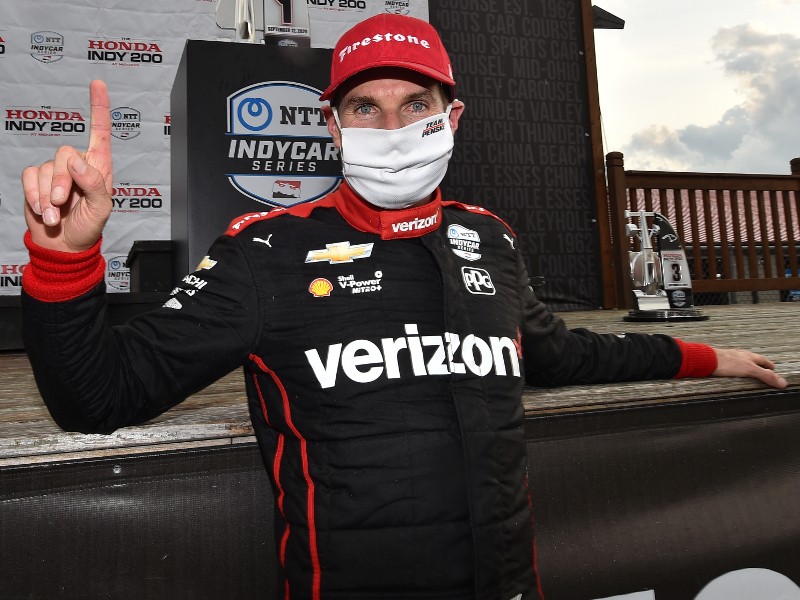 LEXINGTON, Ohio - The most physically challenging track on the NTT IndyCar Series schedule and the threat of rain looming over the last 10 laps of the race were no match for Will Power, who cruised to his first win of 2020 in Race 1 of the Honda Indy 200 at Mid-Ohio doubleheader Saturday at Mid-Ohio Sports Car Course.

Power drove the No. 12 Team Penske Chevrolet to a dominating win in a caution-free race, beating Team Penske teammate Josef Newgarden to the finish line by 7.4523 seconds for his 38th career INDYCAR win.

Power led 66 of 75 laps from the pole after winning the NTT P1 Award in qualifying. It was Power’s 60th series pole, inching him closer to Mario Andretti’s record of 67 career poles.

“I’m so happy to have the Verizon 12 car in Victory Lane,” Power said. “This is probably the first race, I reckon, in about 10 years that I’ve just gone hard. Like every other race we’ve tried to save fuel and play a strategy game. Today I said, ‘Let’s just go hard, man. Screw this. We don’t want to get caught by a yellow. Let’s just run hard and use my raw pace and see what happens.’ And we won the race.

“It was a great strategy. It’s just putting down good laps, lap after lap after lap. Just a flawless day. It’s what you have to do to win races in this series. The whole team did a fantastic job. To see Verizon in Victory Lane again is fantastic because it’s been awhile.”

It was the fourth podium finish for Power this season, who last visited victory lane September 1, 2019 at Portland International Raceway, 377 days ago. His previous podiums this season came at Road America-1, Iowa 2 and Gateway 2.

The Australian’s victory was his first at Mid-Ohio and Team Penske’s 11th win at the 13-turn, 2.258-mile road course, tying Chip Ganassi Racing with the most wins at the circuit. The win also extended Power’s streak of consecutive seasons with at least one win to 14, dating back to 2007.

Power’s biggest challenge came from Rossi, who used alternate pit strategies at every chance to try to get in front of Power.

Then, on lap 46, Rossi was the first driver to pit as he flipped the script and attempted to undercut the leaders. Rossi gained another position, jumping from fourth to third once green flag pit stops cycled through on lap 53.

Rossi held off a late-charging Rahal to score his second podium of the season. He also finished third at Road America-2.

“Yeah, it’s good,” Rossi said. “We just haven’t had a lot of things go our way. I don’t think we’ve had luck, but we haven’t had pace, either. We’re just really trying to go out and make the most of each opportunity we have for the rest of this year. The 27 NAPA/AutoNation guys did a great job. The car was good.

“Had we been able to clear Ryan a bit sooner and get Josef, we could have had a shot at it. The car’s pace was really good. Regardless, it wasn’t meant to be. Starting P6 was always going to be a bit of a challenge, but nonetheless it was a good day for us, and we get to do it all again tomorrow.”

The biggest surprise might have come from points leader Scott Dixon, the winningest IndyCar driver at Mid-Ohio with six victories. Dixon, whose most recent Mid-Ohio win came in 2019, quietly finished 10th, his second-worst finish of the season.

Dixon struggled in qualifying and started 17th. He looked strong early in the race, improving six spots in the first eight laps, placing him 11th. Unfortunately for Dixon, he remained around that spot for the remainder of the race.

Dixon’s point lead over second place Newgarden shrunk by 20 points, and the five-time series champion leads the defending series champion by 76 points. Third-place Pato O’Ward, who finished 11th, is 120 points back of Dixon with four races left in the season.

Power will look to sweep the weekend at Mid-Ohio on Sunday with Race 2 of the Honda Indy 200 at Mid-Ohio doubleheader.