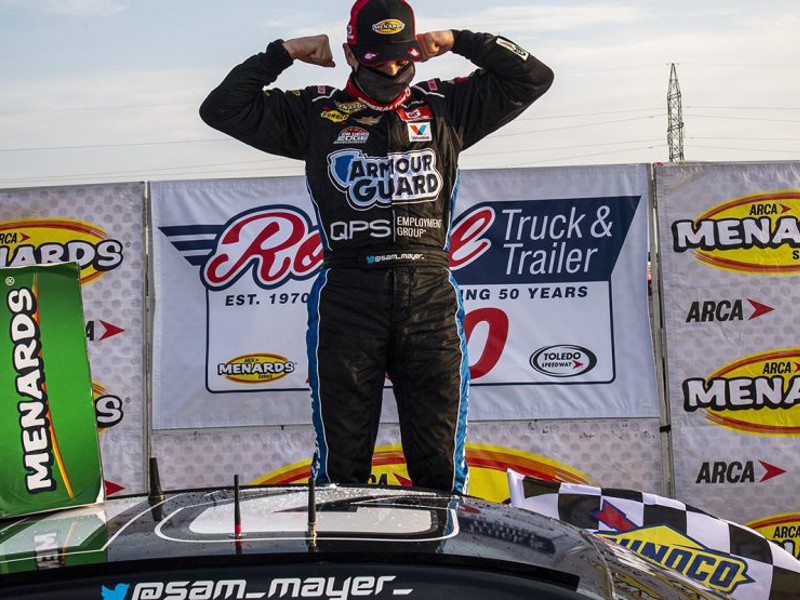 Now he may be ready to call it his new home.

The 17-year-old from Franklin, Wisconsin, posted a near perfect day Saturday en route to winning the Royal Truck & Trailer 200 at the half-mile track. It’s the third straight win at Toledo for Mayer.

Mayer, the defending East champion, extended his lead in that series with his third win in four races. The only time he didn’t win was the East race at Toledo on June 13. He won the General Tire Pole Award and finished second. He came back to Toledo and scored wins on the July 31/August 1 doubleheader weekend.

Mayer was fastest in practice in his No. 21 Lynn Family Foundation Chevrolet, won his first General Tire Pole Award in the ARCA Menards Series, and then led 165 laps to win by 3.071 seconds over Jasper, Georgia’s Chandler Smith.

Smith led 35 laps but was unable to chase down Mayer as the race went caution free for the final 45 laps after the second race break.

By virtue of Holmes’ finish, he took over the ARCA Menards Series championship points lead for the first time in his career. He has a two-point advantage over Self with five races remaining on the schedule. Self had led the points since winning the season opener at Daytona International Speedway in February.

Mayer increased his East points total to 21 over Gibbs with three races still to run.

The series has a quick turnaround, heading to Tennessee’s Bristol Motor Speedway on Thursday, September 17.