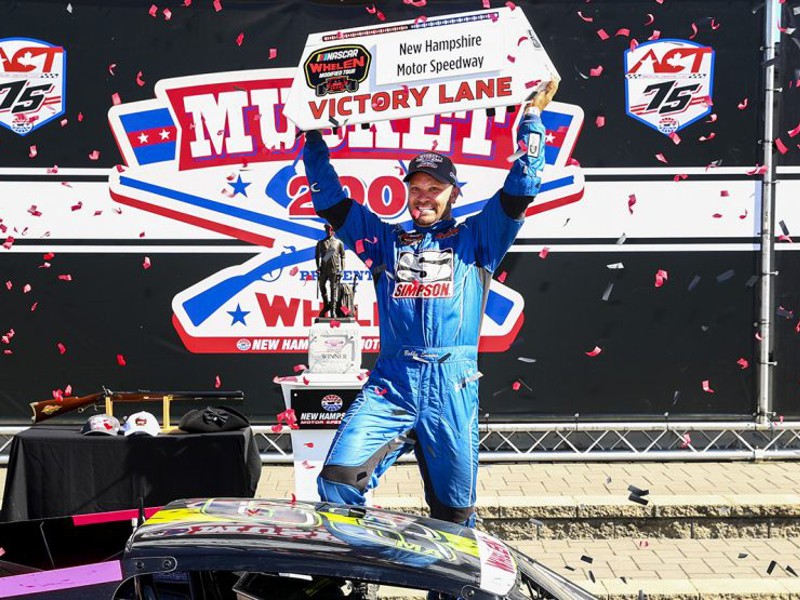 It doesn’t seem to matter what car Bobby Santos III is in, he finds a way to park it in Victory Lane at New Hampshire Motor Speedway.

The 34-year-old from Franklin, Massachusetts, put on a command performance at the “Magic Mile” Saturday to win the Musket 200 for the second straight year.

It is the sixth NASCAR Whelen Modified Tour championship points win for Santos at the 1.058-mile track — seventh overall when you throw in the 2016 Whelen All-Star Shootout — and the third different car he’s won with. After success in the No. 44 for Tinio Racing, when he won four times plus the all-star race since 2014, he won last year’s extra-distance race during New Hampshire’s Full Throttle Fall Weekend driving the No. 36 substituting for injured driver Dave Sapienza.

This year, Sapienza is back, and he fielded the No. 63 Sapienza Enterprises Chevrolet for Santos, who was making his first tour start of the season.

And Santos made it look easy in collecting his 19th career tour win.

After trading the lead back-and-forth in the closing laps with Justin Bonsignore, Santos took advantage of Bonsignore and Ron Silk’s battle for second to pull away, leading the final 10 laps and winning .301 seconds.

Bonsignore led a race-high 53 laps was able to stretch his championship points lead to 27 over Coby and 39 over McKennedy.

The win netted Santos $20,000, the largest winner’s purse for the Whelen Modified Tour in its longest race. It’s the second big win in a row for Santos. He captured the historic Little 500, the prestigious sprint car race at Indiana’s Anderson Speedway, last weekend.

The NASCAR Whelen Modified Tour will run next at Connecticut’s Stafford Motor Speedway in the NAPA Auto Parts 150 on Saturday, September 26.