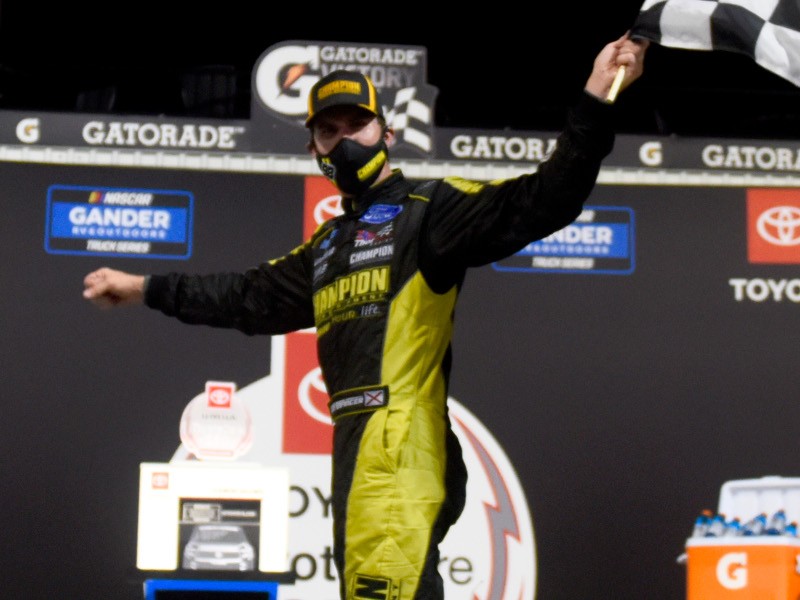 The Mobile, Alabama native answered his season-opening win at Daytona with a win Thursday night in the regular season finale at Richmond Raceway, leading his ThorSport Racing teammates Matt Crafton and Ben Rhodes across the finish line by a 1.033-seconds.

Pit strategy and huge focus helped Enfinger earn a career best three-wins this season, including the victories in the Daytona season opener, then again at Atlanta in June.

“Can’t say enough about (crew chief) Jeff Hensley, we’ve both been beating our head against the wall lately, but we go into the Playoffs with some momentum now,” said Enfinger, who led 18 laps in the No. 98 ThorSport Racing Ford F-150.

Winston, Georgia’s Austin Hill earned the series regular season championship after third-place finishes in the opening two stages Thursday night. The driver of the No. 16 Hattori Racing Enterprises Toyota Tundra will take a 15-point bonus into the Playoffs for his effort. He and fourth-place finisher Rhodes, each led a race best 66 laps of the 250-lap event.

Sheldon Creed, a three-race winner, earned the top-seed for the Playoffs. He’ll start the seven-race Playoff slate next week at Bristol Motor Speedway with a four-point edge over Zane Smith and Hill as the points re-set.

Enfinger is the fourth seed in the Playoffs followed by Moffitt, Rhodes, Crafton, Christian Eckes, Todd Gilliland and Tyler Ankrum.

Not only did pit strategy ultimately result in the winning play for Enfinger, it was a factor in positive outcomes all night.

Smith, 21, a two-race winner this season, used pit strategy to pick up the Stage 1 victory. While the race leaders stayed out on track during the race’s first caution period on lap 54, Smith and a handful of drivers – including Playoff contender Derek Kraus – pit for fresh tires and were able to move forward in time to earn valuable opening stage points.

Rhodes won Stage 2 – his first stage win of 2020 – finishing ahead of Enfinger.

And the 19-year old Californian Ankrum and the 20-year old North Carolinian Gilliland ended-up securing their debuts in the championship field – successfully holding off Kraus in a tight, months-long three-way battle for those final two Playoff points positions.

“I think if I was telling you I wasn’t nervous before today, I was lying,” said Gilliland, who drives the No. 38 Front Row Motorsports Ford F-150. “I have confidence in my team. It’s crazy I was fourth on that last restart and ended up getting lapped. This place is tough. Trying to put this one behind us and reset and work toward Bristol. Just take it race-by-race.”

“So cool to be part of the Playoffs, my first time in three years (of competition),” he added.

While Gilliland emerged from his truck full of joy, two other drivers also with so much on the line Thursday night, ended up on the wrong end of good fortune.

Kraus, the impressive 19-year old rookie from Wisconsin, came into the race one position shy of a Playoff berth. He used pit strategy to earn Stage 1 bonus points – finishing sixth in the opening stage. But his truck was suffering from a splitter issue and was tough to handle all night, ultimately dropping a lap down. He was running mid-pack by the Stage 2 finish.

Kraus trailed 10th place Gilliland by 10 points and ninth place Ankrum by 14 points at the green flag. But while pit strategy helped Kraus earn those valuable points in the opening stage, nagging mechanical problems dropped the No. 19 Toyota to a mid-pack finish in Stage 2, a lap down. He fought the condition all night and ultimately finished 23rd.

“Nothing to hang your head about, zero, nothing,” Kraus crew chief Kevin Bellicourt encouraged the young driver on the post-race cool down lap.

Another typical title contender still hoping to rally in the regular season finale was veteran Johnny Sauter. The 2016 series champion was ranked 15th coming into the race and only a victory would launch him into Playoff contention. Unfortunately, a mechanical problem from the opening laps forced extra pit stops and put Sauter out of contention early on. He finished 27th – eight laps down.