Some drivers look for Playoff gains at Richmond 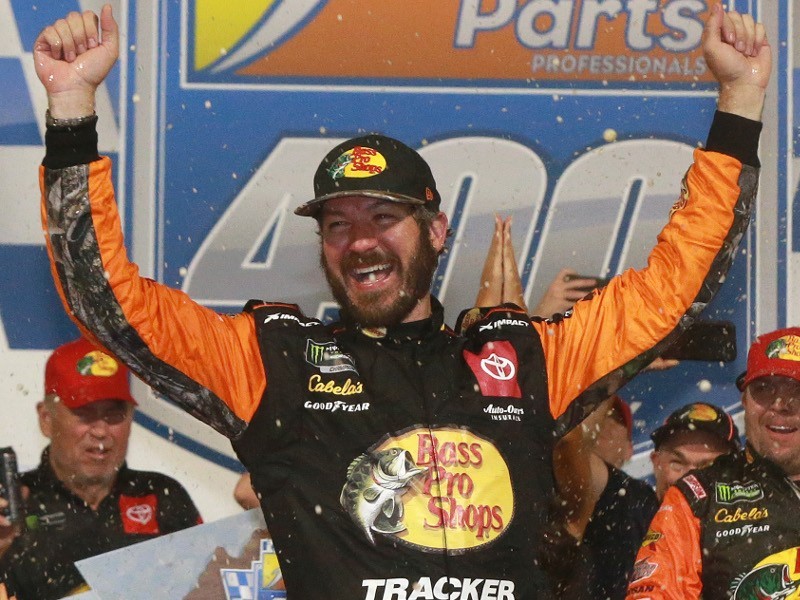 Joe Gibbs Racing teammates Denny Hamlin and Martin Truex, Jr. fielded strong Toyotas and led a lot of laps. Ultimately, regular season champion Kevin Harvick held off the field for a series-best eighth trophy and an automatic bid into the Playoffs’ Round 2 in three weeks.

This 2020 Playoff field showed up ready to take the championship hunt to a higher level. And the expectations for Saturday night’s Federated Auto Parts 400 at Richmond Raceway remain equally as high.

Truex has won the last two Richmond races and his Joe Gibbs Racing teammate, defending NASCAR Cup Series champion Kyle Busch won the two prior to that (2018 sweep). In fact, Busch’s six series victories at the 3/4-mile track are most among his competitors.

And while he is winless on the season, expectations are that a venue like Richmond – or even next week’s half-mile Bristol Motor Speedway – are places that Busch is highly-favored to restore that path to contending for a second straight, and third overall title.

He’s that good at these short tracks.

“Having good cars there (Richmond) has certainly been something that we’ve been fortunate with at Joe Gibbs Racing over the years,” said Busch, who drives the No. 18 Joe Gibbs Racing Toyota.

“I’ve won there six times and I’ve been in the top-five about every time we go there, so I would like to think that we can keep that string going and more importantly, get a win. We need some wins this year and we look forward to Richmond being one of those places we can do that.”

“Right now you can still point your way through the first round, but you’re going to need some wins also. Richmond and Bristol, those are great opportunities for us to score a victory. You get two stage wins and a win at Richmond and Bristol – or both and boom you’re right back in the Playoff picture. That would give us a good opportunity to be right back in the ballpark.”

The challenge for Busch will be that several of his other key competitors have also circled Richmond as a place to score a win or at least, major points with only one more race after that at Bristol to decide which 12 drivers will advance toward the title among the current 16-driver Playoff field.

Harvick has three Richmond NASCAR Cup Series wins and seven Xfinity Series trophies. Hamlin, who is second in points, 19 behind Harvick, also has three NASCAR Cup Series wins and three Xfinity Series wins at the venue he considers his home track. Defending race winner Truex has two wins as does Joey Logano, who is third in points, Kurt Busch, who is 11th and Clint Bowyer, who is 13th. The only other former winner among the Playoff contingent is Logano’s Team Penske teammate Brad Keselowski, who is ranked fourth in the standings. He won the 2014 Playoff race at Richmond.

Currently, Stewart-Haas Racing teammates Aric Almirola and Bowyer are tied in points amassed, but Almirola has the tiebreaker edge -best finish in the current Playoff round. He is ranked 12th and Bowyer 13th. Their other SHR teammate, rookie Cole Custer is 14th, three points behind the pair. Matt DiBenedetto and Ryan Blaney are 15th and 16th – both 17 points behind Almirola.

Among this group of five drivers, Bowyer has the best Richmond record and is the only one with a previous win – victories in 2008 and 2012. The driver of the No. 14 Stewart-Haas Racing Ford has 16 top-10 finishes in 29 overall NASCAR Cup Series starts there.

Wood Brothers Racing driver Matt DiBenedetto and Team Penske’s Ryan Blaney are ranked 15th and 16th in the standings – both 17 points behind Almirola in the 12th place cutoff. Neither of them have ever finished in the top-10 at Richmond.

The good news for these four drivers, is that the points are very close after last weekend’s opener. Only 12 points separate seventh place Chase Elliott from 12th place Almirola. And as it has played out, other than Bowyer, the tightest battles for those last Playoff positions are largely among drivers who wouldn’t count Richmond among their “best” tracks.

“You feel pressure, yeah,” Bowyer said. “I’m going to postpone that pressure until I get in that car Saturday night. I’m just going to wait for then. I’m not going to go ahead and feel pressure right now. I’ve chosen not to experience pressure today. Saturday, it’s a different day.”

With three races remaining to set the 2020 NASCAR Xfinity Series Playoff field – this weekend’s Richmond Raceway doubleheader will play a major role in seeding the championship-eligible drivers and deciding which competitors complete the 12-driver Playoff lineup.

A highly-anticipated two-race slate this week begins with the Go Bowling 250 on Friday night followed by the Virginia is for Race Lovers 250 on Saturday afternoon. No current fulltime Xfinity Series driver has won at Richmond previously.

Contact between the two in the closing laps allowed Brandon Jones to surge by and pick up his third trophy of the year. Chastain finished runner-up (for the fourth time this season), which keeps him third in the driver standings – but eighth place in the Playoff outlook standings, the first driver without a victory on the season.

No doubt he’s eager for that win to propel him to what he would consider a more fitting position to start his first Xfinity Series Playoff run. This weekend gives him two chances for a trip to Victory Lane, however, the0.75-mile Richmond track hasn’t historically been one of Chastain’s best. However, he will start from pole position on Friday.

The driver of the No. 10 Kaulig Racing Chevrolet has only a single top-10 finish in nine previous Richmond Xfinity Series starts. That was a runner-up showing in 2018 driving a Chip Ganassi Racing car. He was 11th in last September’s race at the track.

There are seven drivers with victories this season – six of them are multiple winners from Cindric (five) and Briscoe (six) to three-race winner Jones, and two-race winners Gragson, Justin Haley, and the rookie Burton.

Points-wise there remains one position still considered competitive for the Playoffs. Brandon Brown is 12th points, with a 45-point edge on veteran Jeremy Clements. Myatt Snider is ranked 14th, 51 points behind Brown.

This weekend, marks Snider’s Richmond debut. The 35-year old Clements has 19 Richmond starts, yet only a single top 10 – eighth place in Spring, 2018. He was 35th and 16th in the two races last year. And while he has continued to mount a challenge to Brown, the driver of the No. 51 Chevrolet, hasn’t had a top-10 finish since the Daytona Road Course, five races ago.

Brown, who will celebrate his 27th birthday next week, has six Richmond starts and no top-10 finishes. The driver of the No. 68 Brandonbilt Motorsports Chevrolet has a career-best showing at the track of 19th in Spring, 2018. He was 20th there last year. He hasn’t scored a top-10 this season since a 10th-place finish at Texas Motor Speedway on July 18 – seven races ago. He finished 17th at Darlington last week.

WDUN will have live MRN Radio coverage of NASCAR from Richmond Raceway, beginning with Saturday afternoon's NASCAR Xfinity Series Virginia Is For Racing Lovers 250 at 1:30 pm on 102.9 FM and streaming live on AccessWDUN.  Coverage continues on Saturday night with the NASCAR Cup Series Federated Auto Parts 400 at 6:30 pm on 102.9 FM, AM 550 and streaming live on AccessWDUN.

NASCAR Xfinity Series
Next Race: Virginia is for Racing Lovers 250
The Place: Richmond Raceway – Richmond, VA
The Date: Saturday, September 12
The Time: 2 p.m. ET
TV: NBCSN, 1:30 p.m. ET
Radio: MRN, SiriusXM NASCAR Radio
Distance: 187.5 miles (250 Laps); Stage 1 (Ends on Lap 75), Stage 2 (Ends on Lap 150), Final Stage (Ends on Lap 250)
What To Watch For: This will mark the fourth doubleheader weekend for the Xfinity Series since the COVID-19 pandemic return to racing. This is also the last stretch for Xfinity Series drivers to make their way into the Playoffs with a doubleheader this weekend and the regular season finale at Bristol Motor Speedway next week. … Ross Chastain in the No. 10 Kaulig Racing Chevrolet will lead the field to green on Friday evening with last week’s race winner, Brandon Jones, in the No. 19 Joe Gibbs Racing Toyota joining him on the front row. … The race will be 187.5 miles and 250 laps with Stage 1 ending on lap 75 and Stage 2 ending on lap 150. … In 2019, Cole Custer won the first Xfinity Series race run at Richmond and Christopher Bell won the second. Austin Cindric finished both of those races in second. … Denny Hamlin currently holds the race record at Richmond for the series at 108.415 mph in 2011. … Kyle Busch holds the qualifying record at 129.348 mph in 2004. … Fifteen of 72 Xfinity races run at the track were won from the pole and Kevin Harvick holds the track record for the most wins (seven), most top fives (18) and most top 10s (21). … Joe Gibbs has the most wins of any car owner with 10 at Richmond.