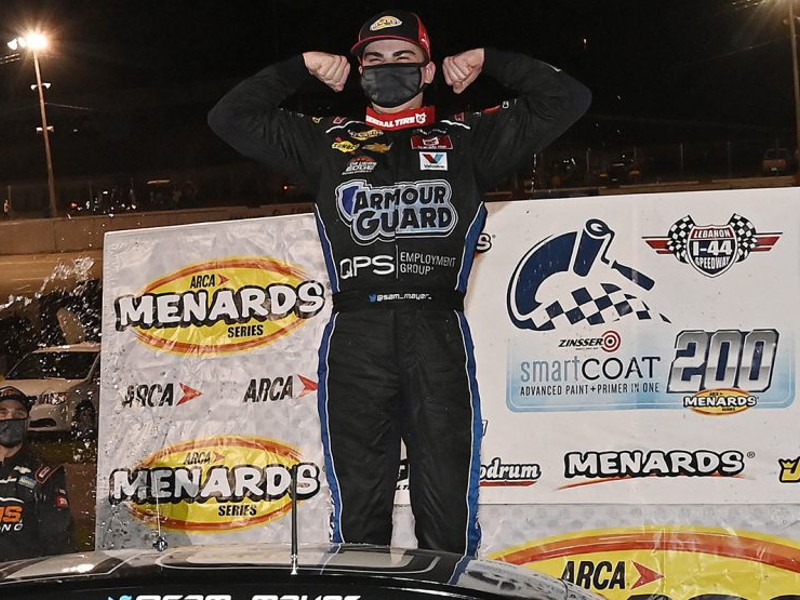 LEBANON, Mo. — Sam Mayer proved the adage “first you have to lose one to win one” was appropriate on Saturday night.

A week after watching a possible NASCAR Gander Outdoor & RV Truck Series win evaporate when he got beat on a late-race restart, the 17-year-old from Franklin, Wisconsin, proved how quick a study he was at Missouri’s Lebanon I-44 Speedway.

He timed his lap 155 restart perfectly to take the top spot away from Hailie Deegan and rocketed to win in the Zinsser SmartCoat 200.

That restart, coming out of the race’s second break, turned out to be the final one of the night and Mayer’s No. 21 Chevrolet crossed the finish 2.977 seconds ahead of second-place Bret Holmes.

The win was Mayer’s third of the season and he hasn’t finished worse than fourth in his past nine series starts. More importantly, it allowed him to take over the Sioux Chief Showdown championship standings after eight of 10 races. Mayer leads Ty Gibbs and Chandler Smith each by five points.

Holmes won his first career General Tire Pole Award earlier in the day and led the first 69 laps before getting turned by Deegan for the lead.

Holmes still managed his third runner-up finish of the season and closed to within one point of ARCA Menards Series championship leader Michael Self. Self was involved in two separate racing incidents and limped home with a sixth-place, one lap down.

Deegan led a race-high 85 laps in pursuit of her first series win. After relinquishing the lead, she got turned around battling Gibbs on the final lap for third and ended up fifth, as 15-year-old Taylor Gray scrapped by them both on the white-flag lap to steal third.