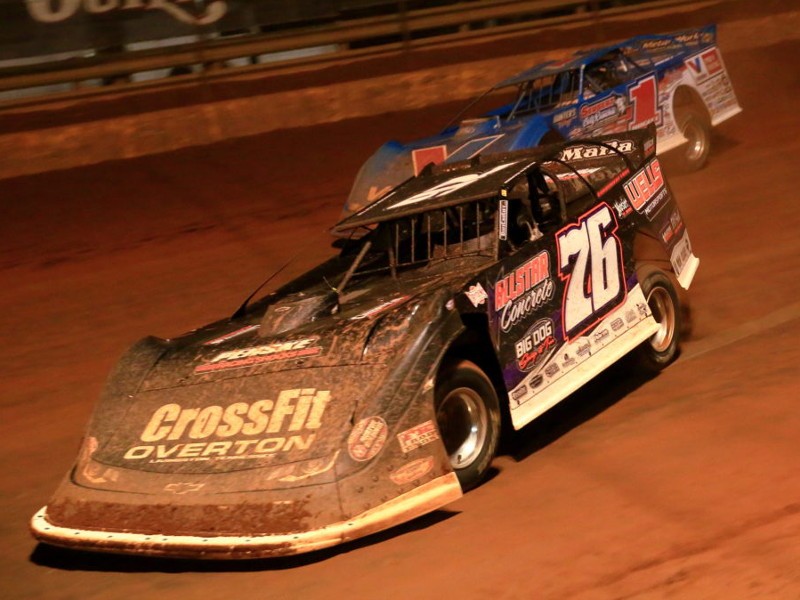 It started with a home state win at Georgia’s Lavonia Speedway on Friday night, and continued on Saturday night with a win at South Carolina’s Lancaster Motor Speedway.

“I’m enjoying this more than ever right now,” exclaimed Overton after his Friday night win at Lavonia Speedway.

The 29-year old drove from sixth to first in the opening 18 laps. He gave up the lead to Dennis Erb, Jr. in lap traffic with just seven laps remaining, but powered back to the top spot on lap 44.

From there, Overton scored his 10th career series victory and a $10,000 payday.

“We’re just having so much right now,” Overton said. “This whole team gets along so well, and I’ve got the coolest car owner in the business. I know that I’ve got a lot of pressure to perform, but they don’t ever make me feel that; and I think that’s huge. My hat goes off to Longhorn By Wells, new motor package was great tonight, and our relationship with Penske Shocks is paying dividends of late.”

The most chaotic moment of the night came on the lap 25 restart, which resulted in the only red flag of the evening. Restarting in third, Brandon Sheppard made a mistake on the turns one and two cushion, getting out of shape and spinning in front of the field.

What followed was pandemonium. Piling in late with with heavy damage was fifth-running Chris Ferguson, seventh-running Ashton Winger, and 12th-running Darrell Lanigan. Along with those four, a whole pack of other backmarkers spun to a stop trying to avoid the melee.

Erb, Jr. finished in second, with Chase Junghans in third, Ricky Weiss in fourth and Zack Mitchell in fifth.

On Saturday night, Overton took the lead from Johnny Pursley on lap 12, and drove away to the win at Lancaster Motor Speedway.

Overton commanded the final 38 laps with ease and cruised to a 3.012-second victory at the checkered flag.

“We’ve got one hell of a hot rod right now; this thing is a joy to drive,” Overton said in victory lane. “Everything is just going so perfect for us right now. We’re really spoiled winning like this, because then you run bad and feel so horrible. These last couple of months have been amazing though, and I hope it doesn’t end anytime soon.”

The World of Outlaws Morton Buildings Late Model Series will have the next two weeks away from the track before reconvening on Friday and Saturday, September 25-26 for a doubleheader in Knox Dale, Pennsylvania at Thunder Mountain Speedway.