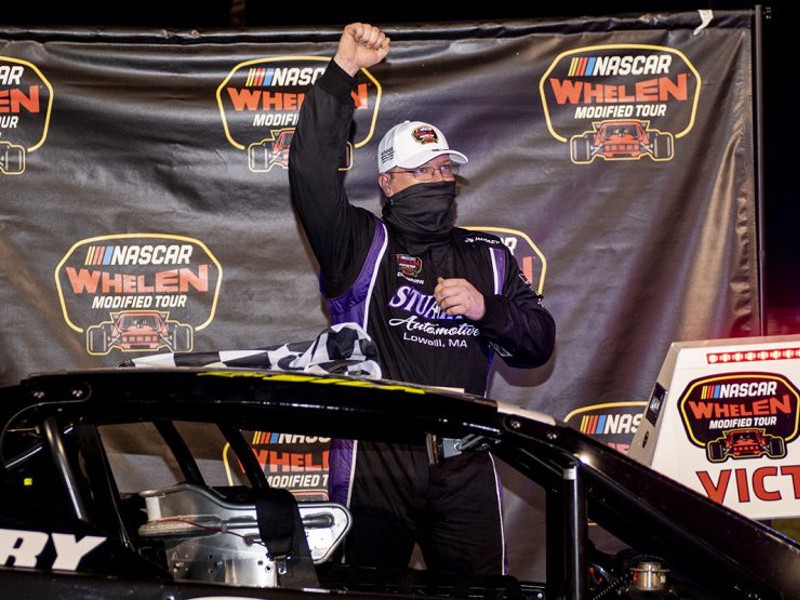 Ron Silk is back.

After taking a race off to recalibrate, it took the Norwalk, Connecticut, driver just two starts to drive the No. 85 Stuart’s Automotive Chevrolet to Victory Lane.

Silk capitalized on a heartbreaking turn of events for Ryan Preece Thursday night, and then drove away from the field on a green-white-checkered restart to capture the Thompson 150 at Connecticut’s Thompson Speedway Motorsports Park.

It was the 14th career win for the 2011 NASCAR Whelen Modified Tour champion and his fifth at Thompson.

The victory was Silk’s first since August of 2019 at Connecticut’s Stafford Motor Speedway.

After starting the 2020 season with a sixth, a 27th and 10th, Silk and the Kevin Stuart-owned team elected to bypass the trip out to Pennsylvania on August 22. The move paid off, as Silk led 114 laps in a runner-up effort at New Hampshire’s Monadnock Speedway on August 29, and then turned around and won at Thompson.

It was an improbable win, as Silk lost the lead to Preece in the closing laps. But Preece, a former Whelen Modified Tour champion and current NASCAR Cup Series driver making his first tour start of the season, had fuel issues under the subsequent caution that brought him down pit lane and ended his night.

On the final restart of the night, Silk fended off championship points leader Justin Bonsignore and Craig Lutz and drove away with the win.

Bonsignore entered the night having won seven of the last eight tour races at Thompson. He led 57 laps before settling for a runner-up finish. Jon McKennedy finished third and Chris Pasteryak fourth. Doug Coby, who won the Mayhew Tools Dominator Pole Award earlier in the evening and led a race-high 66 laps, wound up fifth.

Bonsingore, who collected his sixth top five in six races, pushed his lead to 18 over Coby and 32 over McKennedy.

The NASCAR Whelen Modified Tour heads to New Hampshire Motor Speedway for the third annual Full Throttle Fall Final Weekend. The Musket 200, which pays $20,000 to win, will be Saturday, Septempber 12.