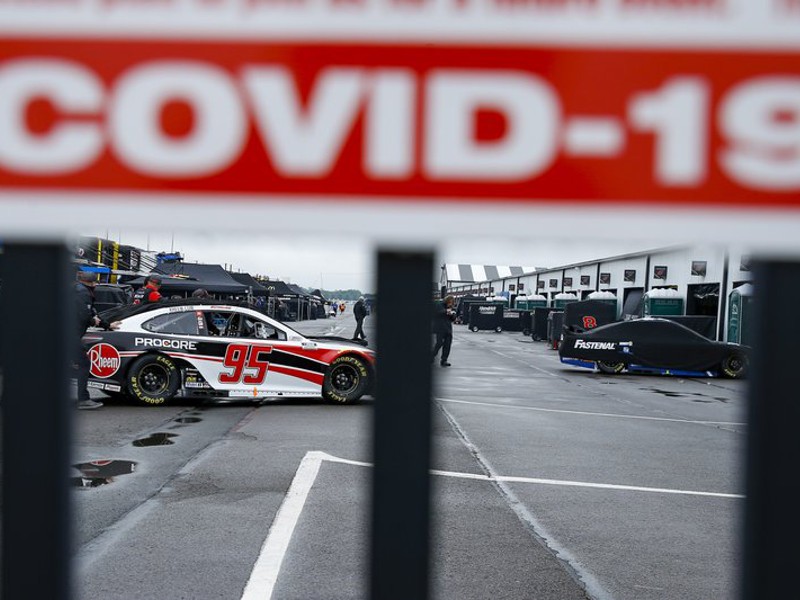 FILE - Crew members are visible under a COVID-19 alert sign as they push the car of Christopher Bell through the garage area before a scheduled NASCAR Cup Series auto race at Pocono Raceway, Saturday, June 27, 2020, in Long Pond, Pa. NASCAR will not grant COVID-19 relief during the playoffs which means a positive coronavirus test will end a drivers' championship bid. (AP Photo/Matt Slocum, File)
Contact Editor

CHARLOTTE, N.C. (AP) — NASCAR has decided it will not grant COVID-19 relief during the playoffs, meaning a positive coronavirus test will end a driver's championship bid.

The playoffs begin Sunday at Darlington Raceway in South Carolina without a safety net for the 16 participants during the pandemic. It's up to each driver to protect themselves from COVID-19, understanding there is no cushion for missing a race.

“I’m probably not going to go to college and hit up a keg stand,” Clint Bowyer said. “If you have COVID, you can’t race. It’s not a judgment call.”

NASCAR at its discretion grants waivers during its regular season for illness, emergency or personal reasons. The waiver maintains playoff eligibility, if the driver qualifies, but no points are awarded while sidelined.

Jimmie Johnson and Austin Dillon both missed one race during the season following a positive COVID-19 test and earned zero points. Dillon won a race — worth an automatic berth in the playoffs — but the seven-time champion Johnson went winless and missed the cut by six points.

NASCAR made no changes for the 10-race playoff series, so missing a race would would effectively end a driver's championship chances.

“If a driver tests positive, that driver needs to have two negative tests in a 24-hour period, or a 10-day period. We are not going to change those rules,” said NASCAR President Steve Phelps.

As one of the first major sports to resume competition during the pandemic, NASCAR put in place guidelines designed to limit both exposure to the virus and its spread. Infield access has been closed to all but essential personnel and events have been held with both limited spectators and empty grandstands.

NASCAR does not test for the coronavirus and is trusting its participants.

“If you look at the success that we’ve had to date, the protocols are working very well,” Phelps said. “Is everything perfect and foolproof? It’s not. But for us, we’ve been pleased with how it’s gone thus far.”

Kevin Harvick won the regular-season title and is the top seed in the playoffs with seven victories. The pandemic has already led to radical changes in his lifestyle that have been bolstered now that the postseason is here. .

He kept his 8-year-old son home from school this semester and the Harvick family has eliminated all social events. They don't even go to the grocery store, he said.

NASCAR until 2004 crowned its champion on a season-long points system that penalized drivers for missing races. It forced competitors to drive injured — Ricky Rudd once infamously taped his eyelids open to drive and Dale Earnhardt, Jr. hid concussions — and the waiver system was ultimately implemented.

The waiver helped reigning Cup Series champion Kyle Busch in his first title campaign when he missed 11 races during the 2015 regular season with a broken leg and broken ankle. He won four times to race his way into the playoffs and then claimed the title.

A serious injury would obviously take a driver out of contention. But the coronavirus is not as clear cut and drivers could theoretically not be tested to protect their season. Johnson was not suffering symptoms but was tested after his wife received a positive test; Dillon was experiencing mild symptoms. Both were cleared to return in under a week.

“I’ve talked to both of them that had it and (they've) probably had worse hangovers,” Bowyer said.

Joey Logano dismissed the idea of deliberately not being tested out of fear of missing a race.