Game of the Week: Warriors ready to shine in season opener against Stephens 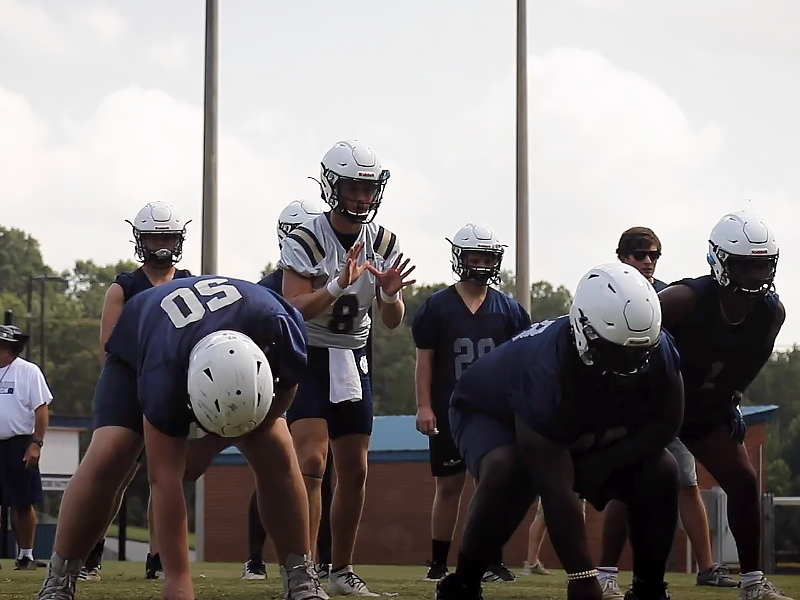 CLEVELAND — Tim Cokely says it has been a grind to get to this day.

Cokely, his staff and players have endured the long, hot summer days of practice and meetings while juggling all the COVID-19 regulations. The Warriors have been working since the Georgia High School Association allowed teams to begin involuntary workouts on June 8 without any hiccups. They followed the protocols. They've washed their hands, social distanced and, now, all they want to do is play.

"It's just been hard work," Cokely said. "It's the literal grind -- the time when we find out. I think erring on the side of doing too much. We've practiced a lot but, wow, is it fun to be looking forward to a game."

After three months of practice, with no spring practice, preseason scrimmages, camps or 7-on-7s, the Warriors will finally kick off against Stephens County tonight at Warrior Stadium. Game time is set for 7:30 p.m. It's only the fifth time the two foes have played with the Indians leading the series 3-1, and winning the last meeting in Cleveland, 21-20, in 2015.

"They're always athletic and they always have a good defense,” quarterback J. Ben Haynes said about Stephens. “We know what's coming, but we're up for the challenge. We are excited about it."

The Warriors return one of the most dynamic offensive threats in northeast Georgia. Led by All-AccessWDUN 11 quarterback, Haynes, who account for 3,017 yards last season, and senior receivers Cooper Turner, Jimmy King and Clayton Rogers, the Warriors' offense should be a nightmare for a rebuilding Stephens County defense.

It’s no secret the Indians have struggled over the last five seasons, including the worst, a 1-9 mark, since 1967 in 2019. Their offense averaged just 18 points per game and they gave up almost 37 on defense. And losing leading rushers Hudson Spurlock (1,250 yards) and MJ Jones (732 yards) to graduation has the Indians making some offensive scheme changes.

And why not? With Liberty University-commit Gamarion Carter, 6-foot-2, 175-pounds, back at receiver and quarterback Kenny Colwell (683 yards, six touchdowns) returning, the answer just might be from the air. Carter hauled in 421 yards and four touchdowns and grabbed more than half of the 53 attempts last season.

“He’s a big, tall fast guy,” Cokely said about Carter. “We know we have our hands full.”

With all the uncertainty surrounding the season to this point, Haynes says he's just blessed to get the opportunity and knows limiting mistakes and stay focused will be the key.

“We just need to focus on us, limit the mistakes and do our thing offensively,” Haynes said. “We know the defense is going to do their thing, we just have to stay true to our plan and, hopefully, it’ll be a good result Friday night.”

STEPHENS COUNTY at WHITE COUNTY
-- WHEN: 7:30 p.m.
-- TICKETS: Online, presale, at the gate
-- WHERE: White County Stadium, Cleveland
-- RADIO: WRWH 93.9 FM; www.wrwh.com
-- STEPHENS COUNTY (0-0, Region 8-3A): Season-opener, 1-9 in 2019
-- WHITE COUNTY (0-0, Region 7-3A): Season-opener, 5-5 in 2019
-- COVID PROTOCOLS: Masks and temperature checks no required. Prepackaged concessions will be sold.
-- NOTABLE: Stephens County leads series 3-1. The Indians won 21-20 in 2015 in Cleveland. All five meetings have come since 2010. ... The Warriors may have been the best 5-5 team in the state in 2019 that did not make the playoffs after enduring a brutal Region 7-4A. They return 14 starters from that group, including one of NE Ga’s best QBs in Sr. J. Ben Haynes. He will have a good OL in front and a plethora of WRs to throw to in seniors Reece Dockery and Jimmy King, and including Cooper Turner, who returns from injury. ... The Indians are coming their worst season in over 50 years. Their last 1-9 season came in 1967. But youth and depth were an issue and expectations are sure to be higher in Toccoa in 2020. They return QB Kenny Colwell and their top WR in Gamarion Carter. But they also lost 1,200-yard rusher Hudson Spurlock. ... Defensively the Indians allowed 36.3 ppg in 2019 and will have to improve against a Warriors offense that should one of the most potent in NE Ga.