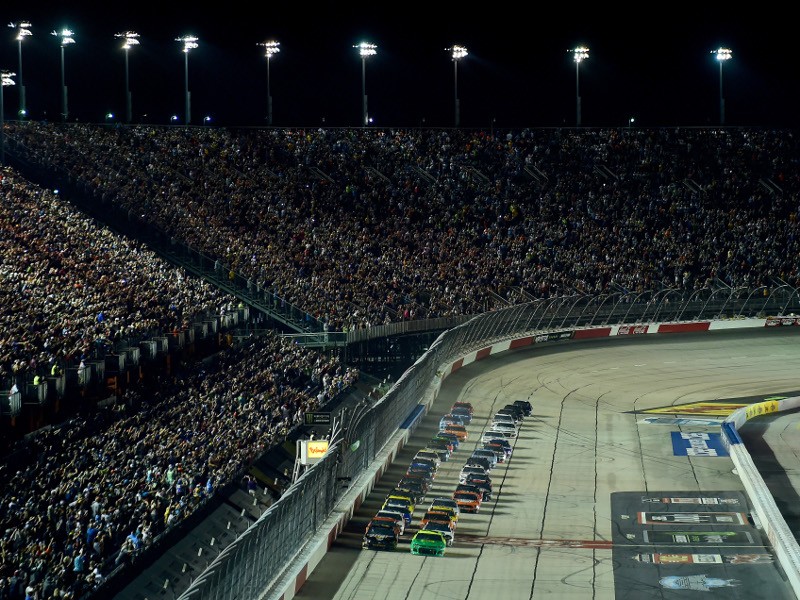 Darlington Raceway will play host to the opening round of the NASCAR Cup Series Playoffs with the Cook Out Southern 500 on Sunday night. Photo: Jared C. Tilton/Getty Images
Contact Editor

The stage is set. The NASCAR Cup Series Playoffs begin Sunday in the Cook Out Southern 500 at the venerable Darlington Raceway.

The next 10 races will decide if the season’s most dominant drivers, Kevin Harvick and Denny Hamlin, will ultimately settle stockcar racing’s most coveted title amongst themselves or if any of the other high-achievers can raise their game when it matters most.

The Playoffs opening round of three races includes stops at Darlington Raceway – known as the track “too tough to tame” – then off to the three-quarter mile Richmond Raceway and finally the famed half-mile high banks of Bristol Motor Speedway. There are 11 drivers who have earned a championship spot by winning a race and five others who will compete for the big trophy thanks to their positions in the points standings.

Harvick captured his first regular season championship two weeks ago following a win at Dover International Speedway and despite the elevated performance of himself (seven wins) and Hamlin (six wins), in particular, Harvick isn’t ready to consider the upcoming Playoffs a two-man race.

“I don’t think I’d narrow it down to one guy,” Harvick said. “Obviously as you look at Denny and his team they’ve been able to week-in and week-out be competitive and have won races and done all the things that it takes to keep themselves right at the top of their game.”

But, he added, “I think there’s a lot of guys that are going to make up some ground and I think as you look at the schedule and the different types of race tracks that are in the Playoffs this year, there’s just a number of things that can happen and there’s just – that mix of race tracks with the short tracks in the beginning, especially, you definitely see Chase Elliott has been tough on those tracks and at some point, Kyle (Busch) is going to hit on it and get it all together and those guys can go on a run, as well.

The Playoff field is as varied as it is talented and this year, even featuring a pair of first-time race winners. William Byron rallied with a dramatic clutch performance to earn his career first NASCAR Cup Series race win in Saturday night’s regular season finale at Daytona International Speedway. And rookie Cole Custer secured his maiden NASCAR Cup Series championship eligibility with a stunning victory at Kentucky Speedway earlier this summer.

For Byron, who was competing with his Hendrick Motorsports teammate, seven-time NASCAR Cup Series champion Jimmie Johnson and Matt DiBenedetto for the final Playoff position, the victory Saturday night was high on emotion and big on impact.

“The Playoffs, I guess just thinking about that,” Byron said of his mindset upon taking the Daytona win. “Honestly, the first thought probably was just how excited I knew that my team was, how excited (spotter) Tab (Boyd) was on the radio, how excited (crew chief) Chad (Knaus) was and how excited I was.

“That feeling of coming off (turn) four, it’s just a shot of adrenaline right into your arm, it really is. It’s just an incredible feeling.”

Also earning automatic Playoff bids with wins this season are Chase Elliott – a two-time winner – and Ryan Blaney, who makes his fifth consecutive Playoff appearance thanks to a Talladega victory early this season. Alex Bowman won his second career race at California’s Auto Club Speedway before the COVID-19 break in action and Austin Dillon earned his third career win at Texas, securing their Playoff chance.

Harvick and Custer’s Stewart-Haas Racing teammates Aric Almirola and Clint Bowyer are ranked 12th and 13th – tops among those without a victory yet. Almirola has a career best five top-five finishes to date and is a past winner at Talladega Superspeedway, which comes up in Round 2. Bowyer has a pair of wins at Richmond Raceway and has led 182 laps this season – the second highest total for the popular veteran since 2013.

Noticeably absent from the list of 2020 winners in reigning Cup champion Kyle Busch, who has three runner-up showings among his 11 top-five finishes, but is still racing for his first win of the season. It has him in an uncharacteristic 14th place ranking among the 16-driver Playoff field to start the Playoff push as he tried to become the first driver to win back-to-back titles since Jimmie Johnson won five consecutively from 2006-2010.

Busch’s ranking heading into the Playoffs puts him in a rather vulnerable position with only 12 drivers moving forward to the second round. The good news for the reigning champ, however, is that the three first round tracks are among his better venues. He is historically one of the best ever at the half-mile Bristol Motor Speedway which closes out the opening round of Playoff competition. He has eight wins there – most among current competitors.

Busch’s older brother Kurt is ranked 15th in the standings and like his younger brother the 2004 NASCAR Cup Series champion has been top-shelf at Bristol. The driver of the No. 1 Chip Ganassi Racing Chevrolet has six victories, including his first career win in 2002. He won three consecutive races from 2003-04 and four in a five-race span if you include that first win in ‘02. The Busch brothers won three straight races from 2018-19, including Kurt’s Playoff race win in 2018 in between a pair of Kyle springtime victories in 2018 and 2019.

Matt DiBenedetto will be making his NASCAR Cup Series Playoff debut this week, earning that final (16th) position by virtue of a 12th-place finish at Daytona on Saturday night. The driver of the No. 21 Wood Brothers Ford has never finished better than 20th in the championship standings in his previous five seasons at the NASCAR Cup Series level.

Understandably, the early focus especially, will be on Harvick and Hamlin who have contributed the largest number of victory efforts on the season.

And their statistics at the 10 Playoff tracks are similarly impressive. Harvick, the driver of the No. 4 Stewart-Haas Racing Ford has earned 26 of his 56 career NASCAR Cup Series wins (46.5 percent) at tracks in the Playoff schedule, including nine wins at the Phoenix Raceway championship site. His last victory at the newly-refigured one-miler, however, was in his 2014 championship season.

Hamlin, driver of the No. 11 Joe Gibbs Racing Toyota, has earned 22 of his 43 career wins at Playoff tracks. He has five victories at Martinsville and two at Phoenix – the last two venues on the schedule.

As with the four-car Stewart-Haas Racing organization, Team Penske also boasts 100 percent participating in the Playoffs with all three of its cars having wins in 2020. The two more-veteran drivers among the trio – Keselowski and Logano – each have impressive resumes at the remaining 10 tracks.