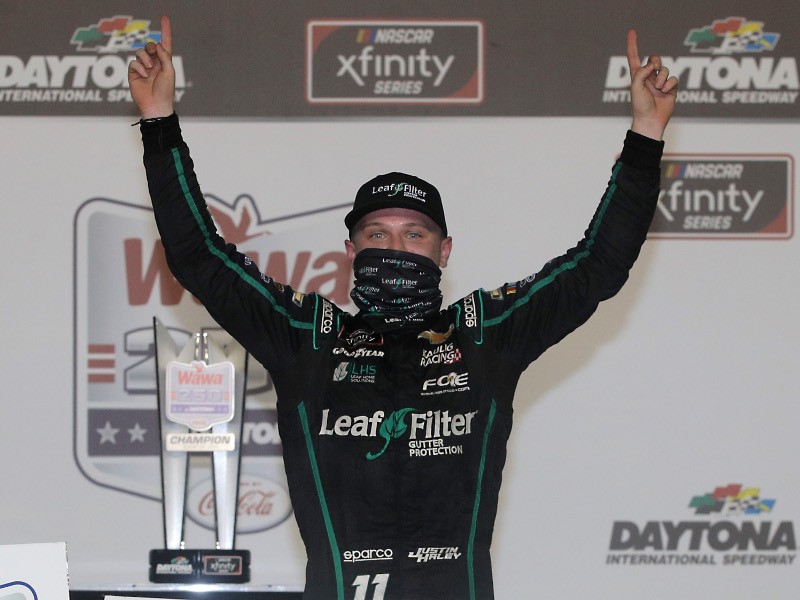 With one turn left in Friday night’s NASCAR Xfinity Series race at Daytona International Speedway, it looked like A.J. Allmendinger had a win in hand.

But then came contact from behind from his teammate, Ross Chastain, which sent both cars sliding and crashing into the outside wall.

Through the melee came their Kaulig Racing teammate, Justin Haley, who drove his No. 11 Chevrolet past the trouble and scored his second victory of the Xfinity Series season.

It matches his surprise win in last year’s NASCAR Cup Series summer race at Daytona, where he scored the victory when the race was shortened by rain.

“An amazing effort by Kaulig Racing,” said Haley. “Obviously I hate that A.J. and Ross got together there. As you guys at home can see, Matt Kaulig, Chris Rice, you know we built a team and a family and we all work as one.”

The three Kaulig Racing drivers had worked together all night, with Allmendinger showing the way from the lead. With five laps to go, a move by Austin Cindric and Chase Briscoe shuffled Haley out of line and moved him back to sixth.

Haley worked his way back to fourth, and as the field entered the final lap, he worked to challenge Cindric for third on the outside.

Ahead of them, Allmendinger looked to have the win in hand. Chastain got a run in the third turn, and as the leaders entered turn four, he made contact with the left rear of Allmendinger’s Chevy.

Allmendinger’s car spun, with Chastain, Michael Annett and Cindric all piling into the outside wall.

Haley cut left down the banking to avoid the crashing cars ahead of him, and ran to the checkered flag for the victory.

“Just a little lucky there,” said Haley. “We got shucked out and I was a little frustrated, but that’s why you never give up. These things are so unpredictable.”

Chastain would finish in sixth.

“We’re supposed to go for the win. Team rules are the last 10 laps and we all stay committed,” said Chastain.” “I hate that Justin go shucked out there with five to go. But coming to the checkered (flag), what am I supposed to do? Finish second? Not this guy.”

Allemendinger was credited with a 15th place finish.

“It’s racing. And congratulations to Justin Haley for getting a Kaulig Racing Chevrolet into Victory Lane. That’s the most important thing.”

While the Kaulig Racing teammates made their strategy work – at lease until the final corner – things didn’t go so well for another Chevrolet team that appeared to have some very fast cars.

JR Motorsports teammates Noah Gragson, Justin Allgaier, Michael Annett and Daniel Hemric hooked up and drafted towards the front in the race’s first 40 laps. The three were so fast that at one point, the two lead cars – the Fords of Briscoe and Cindric – gave up the lead in favor of blocking their momentum.

But a pair of multi-car crashes spelled doom for three of the four teammates.

The first broke out on lap 40, when contact between the cars of Briscoe and Brandon Jones sent Jones’ Toyota spinning, gathering up nine cars in the process, including Gragson, Allgaier and Hemric.

Seven laps later, a cut tire on Allgaier’s car send him spinning in turn three, triggering and accident that gathered up four other cars and resulted in a red flag to allow for track clean-up.

The race was slowed six times in the first two segments for on-track issues, but ran trouble free for the final 40 laps.

Gray Gaulding finished in second, with Briscoe in third, Riley Herbst in fourth and Harrison Burton in fifth.