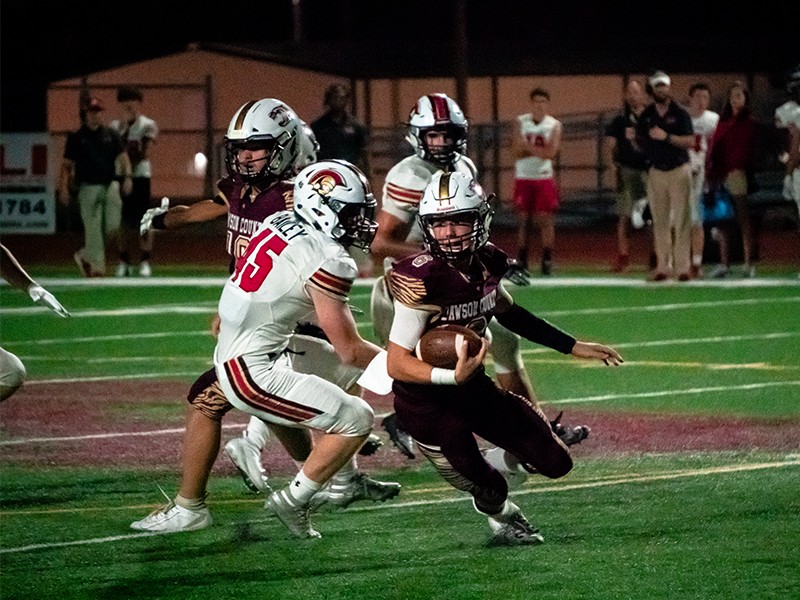 DAWSONVILLE — Sid Maxwell has been running the same ‘super-charged’ system since 1996.

As he says, “we just change with the times.”

Over his 26-year career, his system has awarded him 170 wins, 16 playoff appearances and two region championships.

He currently has the Tigers seeking their sixth straight playoff appearance in 2020.

“You know, we’ve been running the same system for 26 years,” he said. “We just redefine it every year and adapt to what you’ve got to defend each year.”

The Tigers have made the playoffs each year since Maxwell took over in 2015 and, through the last five seasons, has faced the task of replacing several key positions lost to graduation.

This season will be no different, especially on defense and the offensive line.

With only two starters returning on defense, eight key positions will have new faces. Seniors Dakohta Sonnichsen is back at cornerback, and Max Moon is back at defensive end. Gone are leading tacklers DJ Mitchell (113) Riley Herndon (103), Daniel Brock (67), Brody Howell (64), Will Glaze (57) and Bryce Bryant (56).

Maxwell said they are taking a “committee approach” to fill the open spots.

“We’re going to see who becomes the better football players,” he said. “Our goal going in is to give a lot of young men opportunities on both sides of the ball, especially on the internal part of the offensive and defensive lines.”

Juniors Kevin Haymond and Kincaide Weaver will play linebacker and junior Braeden Hubbard will rotate in the secondary.

“We’ve got guys that are going to be sophomores and juniors that will be competing,” Maxwell said. “We feel good about all of those guys. We’ve just got to get them some experience.”

The Tigers return the most experience on offense, with Zack Holtzclaw at quarterback. As a sophomore, Holtzclaw hit 139 of 229 targets for 2,352 yards and 23 touchdowns.

“His demeanor is probably the biggest positive,” Maxwell said about Holtzclaw. “He’s a very humble young man. His main focus is he’s always trying to get better. He’s coming off a 2,400-yard performance and, a lot of times, players come in the year with the attitude of they have arrived. He’s not that guy. He’s built for team success.”

“Dakotha has always been a guy that does good things with the football,” Maxwell said. “I’ve seen him grow each year, but especially this year. I feel like he’s a lot more confident. He’s out there with a purpose, so I feel like he’s setting himself up to go out and have success this year.”

With the graduation of Shawn Thomas (813 yards rushing, 7 touchdowns), Isaiah Grindle will take over as No. 1 running back. Grindle rushed for 436 yards last season and scored seven touchdowns.

“I’m blessed to have a great staff,” Maxwell said. “I’m very confident in the coaching staff, under their direction, we'll have these guys ready to go and in the right place. So, I have no worries about the guys not knowing what to do. It just comes down to our guys getting it done on the field.”

The Tigers will be tested early in the non-region schedule against Flowery Branch and South Forsyth. But will open Region 7-3A slate against newcomer and region title contender White County at home on Oct. 9.

The new region also brings in an improved Gilmer, West Hall, a revamped Cherokee Bluff team, Lumpkin County and will end the season against North Hall -- always a classic game.

"It’s definitely a more competitive region,” Maxwell said. “It’s really great for the communities because we’re all so close, and you’ve got some little rivalries. You don’t have an outsider like GAC coming into the program, which nobody knows anything about. Again, everybody has a chance to have some success. It’s going to be fun."