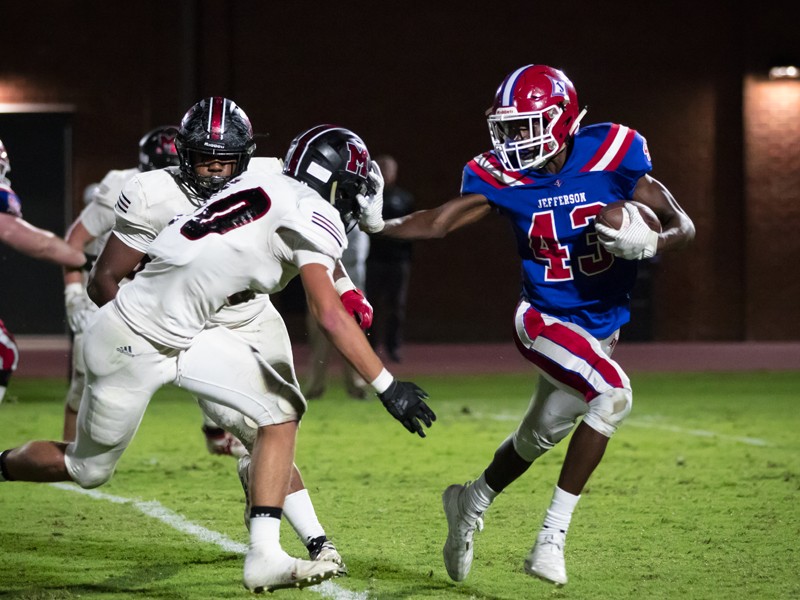 Jordan Perry is expected to be a key player in the Dragons' spread option offense.
Photo/Seth Chapman

JEFFERSON — Gene Cathcart doesn’t like to reminisce about the 2018 season, and who would?

But he’s now reaping the benefits of that season, where he lost more than 40 percent of his starting lineup.

Why? There’s only one answer: depth. And throw in the COVID-19 shutdown of all high school athletic activities, it makes that season seem like a Godsend now.

“So many players played two years ago when ordinarily, in a program like Jefferson, they would not have had the opportunity,” Cathcart said. “The injuries allowed them to play. So, we’ve got guys, combined with the successful year last year, that have a lot of time on the field.”

The depth, for sure, has the Dragons, who finished 10-2 with a Class 3A quarterfinal playoff appearance, way ahead of schedule in terms of experience.

Sure, there will be issues for the Dragons, like replacing team captains Colby Clark at quarterback or Kade McNally in the backfield, but with 16 starters returning, the Dragons are in good shape.

“Obviously, when you’re in a program like Jefferson, you’re always going to graduate really fine players,” he said. “We certainly know they’re going to do good things at the next level, but we’re fortunate to have a lot of really good talent returning.”

The Dragons return seven starters to Cathcart’s spread-option offense, including Power 5 dynamic do-it-all athlete junior Malaki Starks, who could see time at quarterback. Also vying for that spot will be senior Carter Stephenson, who was 7-1 as a starter, playing for an injured Clark, in 2018. Juniors Max Aldridge and Mikey Sheehan are prospects as well at quarterback.

“We’re going to let it play itself out,” he said. “We want to give Malaki a chance to touch it as much as he can. And Carter did a great job leading us two years ago. We’ll see how it shakes out in practice. We think those four can win ballgames for us.”

The Dragons have a few different options at running back in speedsters junior Jordan Perry and senior Kolton Jones. Senior Paxton Corkery returns at fullback as well as junior Reese Johnson

Junior Dawson Crowley is back at wide receiver, and Colton Steele and senior Colton Dufresne along with junior Dylan Ryoul, return as starters on the offensive line.

Defensively, Jefferson returns their entire secondary as well as a strong linebacker roster.

The secondary returns all six, which as Cathcart says, is a rarity in football.

As far as to question marks on defense, Cathcart points to the defensive line. He’s not a fan of playing lineman both ways but will most likely have to in 2020.

“We think it’s tough to play our kids both ways on the line of scrimmage,” he said. “We’re going to try to minimize that as much as possible.

Senior Carson Woodward will be joined by senior Jaheim Hardy. Dufresne and Steele will rotate as well.

When the GHSA realigned its classification in February, Jefferson moved out of Class 3A to 4A.

It also didn’t get any easier for the Dragons in the new Region 8-4A, which houses annual contenders Flowery Branch, North Oconee and Madison County, along with Chestatee and East Hall.

‘I think we left an outstanding region and got into an extremely tough region, also,” Cathcart said. “Every team in our region is so well-coached. It’s going to be a challenge every week. There’s not an easy at-bat in our region.”

MASCOT: Dragons
TEAM COLORS: Royal blue, Red and White
CURRENT REGION: Region 8-4A
HEAD COACH/RECORD AT SCHOOL: Gene Cathcart, fourth season, 28-8
2019 RECORD/ACCOMPLISHMENTS: 10-2, quarterfinals of Class 3A playoffs
KEY LOSSES: QB/LB Colby Clark, RB/LB Kade McNalley, OL Mason Ware, DL Hurst Young
OFFENSIVE STYLE: Spread option -- The Dragons return some dynamic playmakers on this side of the ball. Fans may see a change from the downhill attack to more of an outside game.
KEY OFFENSIVE PLAYERS: 7 returning starters -- Sr. QB Carter Stephenson, Sr. FB Paxton Corkery, Jr. RB/QB Malaki Starks, Sr. RB Kolton Jones, Jr. RB Jordan Perry, Jr. Reese Johnson, Sr. OL Colton Dufresne, Jr. OL Dylan Ryoul
DEFENSIVE STYLE: 4-3/3-4 -- Jefferson's defense only allowed 10.75 PPG last season. They return plenty of depth this season in the second and third levels.
KEY DEFENSIVE PLAYERS: 9 returning starters -- Jr. DB Malaki Starks, Sr. LB Paxton Corkery, Sr. DB Nick Evans, Sr. LB/DE Rem Maxwell, Sr. OLB Spence Neese, Sr. DL Colton Dufresne, Sr. Kam Robinson, Sr. S Hunter Blayton, Sr. DL Carson Woodward
SPECIAL TEAMS: Jr. Owen Botts, Jr. Levin Jones and Jr. Eli Ivey will be battling for PK duties
STRENGTH:  LB/Secondary/Depth -- The Dragons return 16 starters from last season's team, which will vastly help them with the lack of preseason preparations. They also return their entire secondary and most of the linebacking corps. It’s all good news for a team that moves up to a tough Class 4A.
QUESTION: DL/Kicker -- Cathcart says he doesn’t like playing his lineman on both sides of the ball but will most likely be forced to do so because of depth issues in the trenches. The Dragons’ two losses last season, a 21-20 loss to Oconee and a 22-20 loss to Crisp County in the second round, left Cathcart unsure about his kicking game. He’ll look to find consistency there this year.
KEY GAMES: After South Carolina pushed its season to region games only, the Dragons had to fill some dates and did they ever. Now, they'll open with Class 5A's Central Gwinnett at home, followed by a showdown against Class 2A power Rabun County and South Carolina-commit Gunner Stockton. In Week 4, the Dragons will travel to former region foe and Class 3A perennial contender Hart County. It doesn't get any easier the following week as the Dragons open Region 8-4A play at Flowery Branch. It’ll be a test right out of the gate of region play as most believe the game will determine the region champ. But don’t rest easy on the remaining schedule, which features three consecutive home games against East Hall, Cedar Shoals and Chestatee, before closing out the season on the road against title hungry programs North Oconee and Madison County.