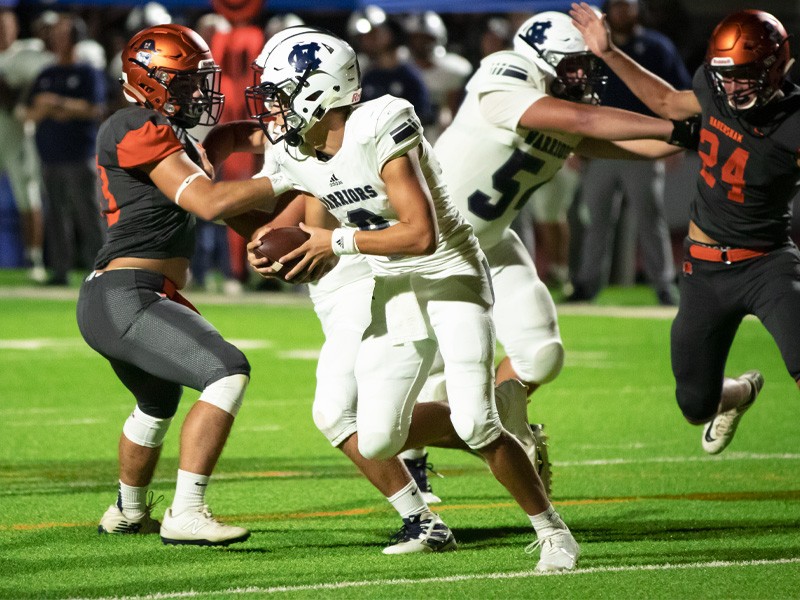 CLEVELAND — Tim Cokely has a load of talent returning in 2020 and, with the drop from a brutal Region 7-4A to the more-closely competitive Region 7-3A, the Warriors are now instant contenders.

The idea of being a region title contender is something that Cokely will not shy away from. He’ll tell you his team is good but with the uncertainty surrounding the season because of COVID-19, he does have some concerns.

“I could toss out cliché after cliché, but I’m going to save you time,” he said. “We’re a good football team, and we want to play for a region title. But what is anybody expecting out of anything, right now? Aside from keeping our players safe, the practice side is this is not going to be a normal year as far as who’s prepared well in the offseason.”

With the amount of returning weapons on both sides of the ball -- 8 on offense, 6 on defense -- Cokely could be way out in front as far as preparation goes because of the experience.

Four-year starter and First Team All-Region member in a star-studded Region 7-4A last year, J. Ben Haynes returns at quarterback to lead an offense that churned out more than 4,000 yards last season. And, even more impressive, Haynes accounted, in the air and on the ground, for all but 983 of those yards.

“He’s had a chance to lift and get his body into football shape and into a football body, plus he’s added some velocity,” Cokely said about Haynes. “So, those things are really going to help his game because he’s a natural runner, which people don’t know that he can really run. The added velocity, though, is going to make him a complete player.”

Haynes (2,149 yards passing and six touchdowns, 961 yards rushing and 17 touchdowns) will have his main target back in senior Cooper Turner (901 yards, six touchdowns). Also back are seniors Reece Dockery and Jimmy King. The trio of receivers along with potential All-State quarterback Haynes should make Cokely’s spread offense tough to defend in 2020.

“J. Ben has been throwing to Cooper, Reece and Jimmy since he was 6 years old,” Cokely said. “If that helps or if that relationship is good for football, then it’s going to be great for our team.”

The biggest question mark is the offensive and defensive lines. Cokely says he doesn’t like his linemen playing both ways but probably will have no other choice this season.

“It just seems over the last three years, nobody has had lineman, us included, so you end up playing a couple of them both ways,” Cokely said.

Senior Austin Sullens, a Class 4A state runner-up in wrestling last season, returns at guard and will be expected to be the leader.

On defense, the Warriors return seniors Zion McMullen and Jesse Moose at linebacker. Juniors Silas Mulligan and Alex Thornton in the secondary and senior Jaquez Williams and junior Heaven Gholston on the line. Sullens will see some time on the D-line as well.

The Warriors will be tested before they begin region play on Oct. 9. Stephens County, a super-talented Hart County, Pickens and Habersham County make up the non-region schedule.

They open region play with another title contender Dawson County on the road, followed by three straight home games against rival North Hall, West Hall and another rival, Lumpkin County, before closing the season out at Gilmer and a much-improved Cherokee Bluff.

“They’re just some really tough opponents in our region,” Cokely said. “But I think it’s going to be a really competitive region. It’ll be an interesting season, but a really fun region.”