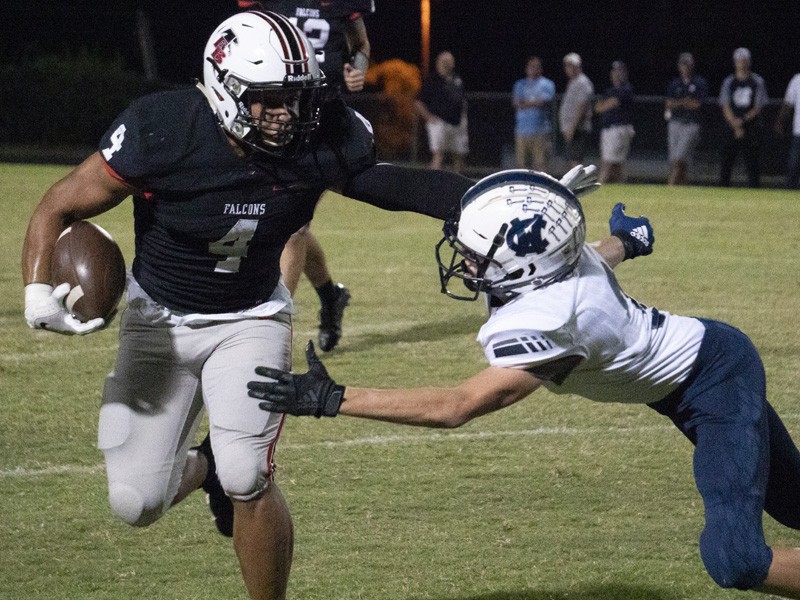 FLOWERY BRANCH — Flowery Branch has reached a point as a program that many other schools would love to reach.

The Falcons lost a number of key contributors to their playoff teams over the past two seasons. Despite that, head coach Ben Hall is confident that he has a team that is once again ready to compete in a tough region and classification.

“We have a lot of kids back,” Hall said. “Our kids are getting better each and every year. We have a solid nucleus to build around.”

Hall’s biggest questions around his team have more to do with how they respond to a Coronavirus-shortened offseason.

“This year, not having spring practice, are we going to be able to hit fast-forward and gain the same level of focus? We would never question the character and integrity of our kids. We have a really fun group to work with and I know everybody’s excited,” Hall said.

The Falcons will be looking to recreate the success that Hall’s first three seasons in Flowery Branch have brought. They’ve made the playoffs three years in a row and have only been halted by some of the elite programs in the state of Georgia. Last year, for example, ended in a hard-fought 14-7 loss at top-ranked Cartersville in a brutal first-round playoff draw.

Another successful season will no doubt require more tangles with top-flight opposition and Flowery Branch looks to be up to the task.

One of the top offensive players in Region 8-4A will be Falcons’ running back Jaizen Ellingham, who enters his senior season off the heels of a breakout junior campaign. A downhill running game will once again be the focal point of Hall’s offense.

“We’re always going to be a run-first team. That’s our goal is to establish the line of scrimmage and be able to run the football,” Hall said. “Last year after doing the breakdown, we were 70 percent run and 30 percent pass and percentage will be consistent, but probably a little bit more in the passing game this year.”

That passing game may be able to open up more thanks to the added experience of junior quarterback David Renard. Renard was thrust into action as the starter last season after Division-I commit Elijah Gainey suffered a season-ending injury in the preseason.

Renard had the ups and downs one would expect from a first-year sophomore starter, but Hall said he is now prepared to handle a larger load in the offense.

“I look for David to have a breakout season this year. He’s an athletic kid who’s worked his tail off in the weight room. He’s not only a great student, but he’s a student of the game as well,” Hall said.

Not only will Renard provide a greater passing threat, but Hall said he may prove to be a dangerous runner as well.

“We felt last year that we couldn’t take chances with him in the run game as much because we had a freshman backing him up, but he’s gained some weight now and gotten bigger and stronger and Brody Jordan is going to be a solid sophomore behind him,” Hall said. “We feel like we can offer some more in the quarterback run game.”

Flowery Branch looks to have an improved receiving corps for Renard to throw to as well. Connor Larson and Ryan Lusco will return as starters and Hall said Jaheim Hayes could be a game-breaking player to watch as well.

The Falcons also have a pair of strong tight ends in junior Baxley O’Brien and Sal Sangson. Hall said the offense will look to use plenty of two-tight end formations to take advantage of their depth at the position.

Last year, Flowery Branch was able to tear through the first half of their schedule on the strength of one of the premier defenses in the state of Georgia. The Falcons didn’t allow a point until their fourth game in 2019 and surrendered just 13 points per game over the season.

They will need to replace a number of key starters if they hope to replicate that success. Defensive backs Chase and Chandler Dial-Watson and linebacker Connor Mayfield will leave big holes for Hall and his staff to fill.

The secondary will need a total overhaul. Hall said Jake Beaver will be the most experienced member of the new unit with Trey Augustine, Jaheim Hayes, T.J. Stringer and Miles Ivey filling out the defensive backfield. Connor Larson is also expected to contribute in addition to his work at wide receiver.

Hall said there are other new faces that could provide a spark for the secondary as well.

“Jake Costello, he’s one kid that you probably haven’t heard of that we expect big things out of,” Hall said. “Nick Linkowski is an athletic kid that we feel will be in the mix, and a sophomore Max Eubanks, either in the secondary or at wide receiver, we feel like can be successful for us too.”

The defensive line will be the most experienced position on the Flowery Branch defense. Anthony Menjivar, Clay Anderson and Daveiyon Stevens will return to the starting lineup with Chandler Mayfield moving down from linebacker to defensive end. Gavin Roberts will provide a physical presence on the interior.

Flowery Branch will return one of the top kickers in the area in senior Maddux Trujillo. Hall said Trujillo made several kicks from over 45 yards last season and is expected to be a weapon for the Falcons.

“He’s really efficient,” Hall said. “Having a guy like (Maddux) you feel good about making every extra point and giving you a scoring threat when you get into the red zone. Hhe definitely offers that.”

Hall knows his team will have to compete in a tough region, and he’s lined up a tough non-region slate to prepare them for that. Flowery Branch will open the season at home against St. Pius and will also play local Class 3A power Dawson County and arch-rival Gainesville of Class 7A.

The Falcons will then open region play with perhaps the biggest game of the entire region schedule, a home matchup against Jefferson who moves up from Class 3A and is one of the area’s dominant programs. It will also be a matchup with personal history for Hall, who coached at Jefferson before arriving at Flowery Branch in 2017.

“Then we follow them with a off week and then we have North Oconee,” Hall said. “People aren’t really talking about North Oconee, but they’re sitting there with a Clemson commit at quarterback and very talented coaching staff and roster. They’ll be in the mix as well.”

Hall says he believes his team is capable of handling the tests they’ll see this season, but he said only time will tell how the group will handle an unusual offseason.

“I feel great about the kids that are returning and the character of our team, but can we hit fast-forward?” Hall said. “We’ll find out when we hit ‘play’ this August.”