Jones says mindset will be key for talented Bears 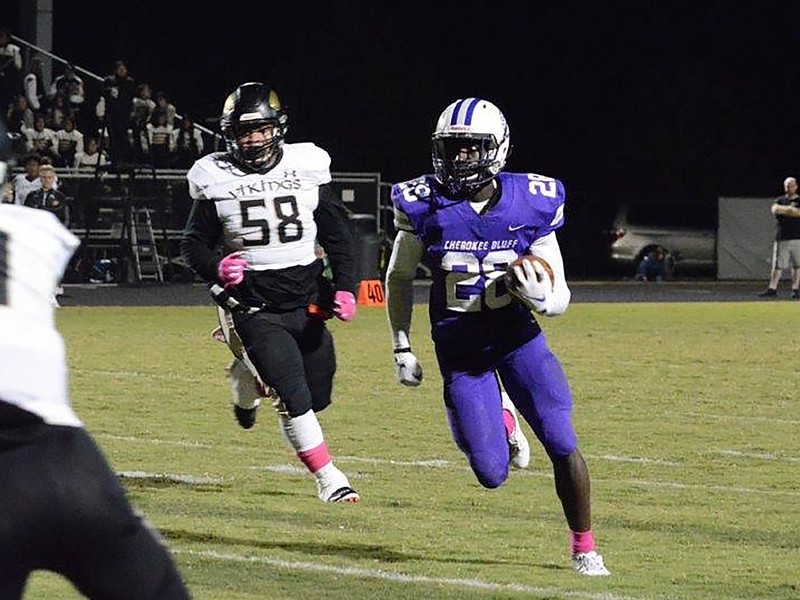 FLOWERY BRANCH — Tommy Jones has faced a number of challenges in the ground-up construction of the Bears football team.

After a 0-10 inaugural campaign in 2018, last season saw Cherokee Bluff improve, going 3-7 with all three wins coming by an average of 30 points.

More improvement could mean major success, and for the first time since the school opened its doors, the Bears may finally have the talent and, more importantly, experience needed to be a real threat in the Region 7-3A playoff race.

“It is a totally different deal than it was in year one and year two,” Jones said. “We have 19 seniors this year. Year one we had three and last year we had eight. The majority of those first two senior classes were made up guys that for one reason or another migrated to our place without a whole lot of football experience.”

Jones said the experience of this year’s team provides them with some key depth at positions like linebacker and offensive line.

Cherokee Bluff also looks to feature some of the premier skill position athletes in the region, with junior running back Jayquan Smith returning after a breakout sophomore campaign and senior athlete Shad Dabney joining the program after leaving Riverside Military Academy where he garnered several Division I offers.

“(Jayquan) is an excellent ambassador for our football team. He’s a 4.0 student, he has a servant’s heart and he is an excellent football player. I think last year, he averaged close to 10 yards per carry,” Jones said. “We are really excited about getting Shad into our program. He’s a great young man and he exemplifies a lot of the positive things that we look for in our athletes.”

Smith looks to be the centerpiece for Jones’ I-formation offense. A new face, however, will lead the passing game, after the transfer of quarterback Mason Thomas.

Jones said the quarterback battle will be a race between incoming Dacula transfer Sebastian Irons and rising freshmen Asher Wilson and Josh Oliver. Whoever wins that race will have a talented set of receivers to connect with downfield.

While it’s unclear exactly how Dabney will factor into the offense, Jones said getting the ball in his hands will be important. Dabney starred at quarterback and receiver at Riverside Military Academy.

“I really have no idea, except for the fact that I know he’s an excellent football player when he has his hands on the ball, so we’re going to try to find ways to make that happen for sure,” Jones said.

On the offensive line, juniors Mateo Guevara and Garrett Davis will lead the push. Overall, the Bears return 60 career starts along the offensive front, and Jones said he expects that to make a world of difference from the past two seasons.

“They’ll be the first ones to tell you that from a physical standpoint, it was a challenge in year one,” Jones said. “But as they’ve progressed, they’ve gradually gotten better and they’ve worked hard in the weight room”.

Offensively, Jones said they will need to be balanced to have success in 2020.

“We need to have guys play in space really well and at the same time, we know we need to be physical and have the ability to run the ball,” Jones said. “The question mark is the quarterback position. We don’t have a returner at that position and that position is huge.”

On defense, Cherokee Bluff will continue to operate out of a multiple-look front.

The strength of the unit should be at linebacker, where they return every starter from last season. Garrett Davis, Brayden Nance, Eli Little and Eric Gohman will return as starters with Charles Tolbert able to provide help at outside linebacker as well.

The Bears also look to be strong in the secondary, thanks in no small part to the addition of Dabney, who Jones said will help bolster what he already expected to be a good unit.

Aiding Dabney in the defensive backfield will be returning starter Jamir Tolbert as well as Sam Stripling and two-way players Jaylon Justice and Micah Hunter.

Dakota Collins and Myka Sims return on the defensive line, with Jacob Benjamin and Mateo Guevara rounding out the unit.

Jones said while he feels confident about his returning talent on the defensive front, he will likely need some unproven players to step up over the course of the season, which could be the biggest question mark facing the Bears’ defense.

“From a defensive front perspective, how quickly can we have some of those young guys to fill in those key roles on the defensive line,” Jones said.

On special teams, Dabney looks to be a key factor again as he’s expected to handle much of the kick returning duties. Mason Gill will handle kicking duties, while Hunter Waldrop will be the long snapper.

Jones is optimistic about the Bears’ chances for their first-ever playoff trip, but he said the key for this year’s team will be keeping their nose down.

The season opens at home against cross-county foe Johnson, who the Bears have split their first-ever two matchups with, winning last year 37-7. The non-region schedule also will include road trips to Chestatee and Georgia Military College and a home matchup with Lakeside of Atlanta.

Region play will be the key. Cherokee Bluff will remain in Region 7-3A, a region that has seen a number of changes. Perennial front-runner Greater Atlanta Christian and Hall County foe East Hall have left the region while West Hall, White County and Gilmer have been added.

North Hall, Dawson County and Lumpkin County join the Bears as returners to the region.

Jones said the region will provide a weekly challenge for a team looking to make its first-ever playoff appearance.

“When you look at it on paper, you’ll see that there is a lot of parody, but also a lot of quality,” Jones said. “It’s a region that you’ve got to show up and play every Friday night, and we’re excited to be a part of it and be able to compete.”

Jones said the team will need to stay focused on a daily basis if they hope to crack the region’s top four and make that coveted playoff trip. He said this year’s Cherokee Bluff team has the talent, but will they be able to translate that to success.

“We want to be able to control the things that we want to control,” he said. “We want to learn how to respond to adversity well. I’ll quote Mark Richt and say that we won’t really know if this is a great season for four or five years when we look back and see how these young men are as far as, are they good husbands, are they good fathers, are they productive citizens in our society, do they love their neighbors well? Those are the things that will really judge how we’re doing as a program.”