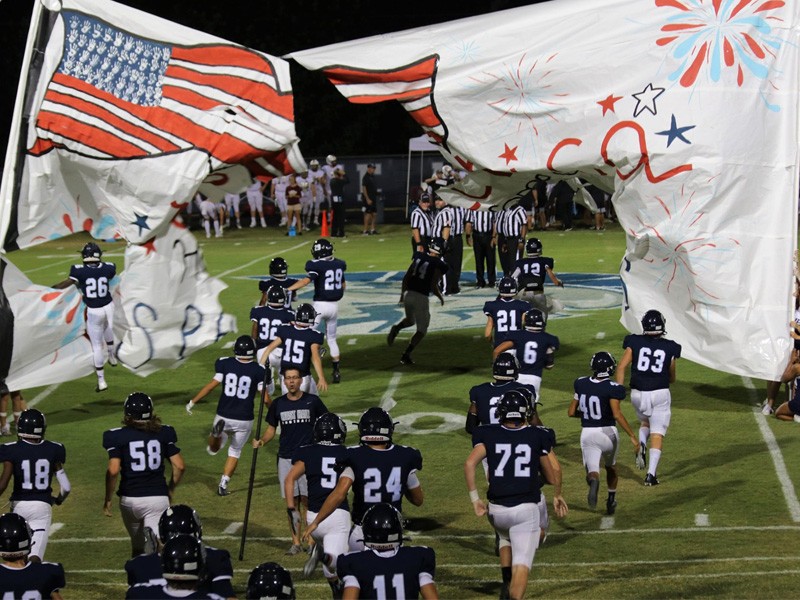 Most coaches would say that, but the statement has more urgency for Montgomery’s Spartans, who are coming off an 0-10 season in 2019.

Montgomery says youth and a brutally difficult schedule made last season one of the toughest he’s had as a coach.

“When you play freshmen and sophomores around northeast Georgia, or Georgia in general, some bad things can happen on a field,” Montgomery said. “The good thing is when they’re coming back.”

Despite last season’s struggles, returning talent along with a new and hopefully more forgiving region have Montgomery optimistic for the 2020 season. West Hall graduates just nine seniors from last year’s team and will return starters at several key positions.

Offensively, the Spartans will lose two starters on the offensive line as well as standout running back Solomon Riley.

They will, however, return two key receivers who didn’t play in 2019 due to injury in seniors Tad Davidson and Rodrigo Lopez. Davidson was expected to be the Spartans top receiver last year before a preseason knee injury sidelined him for the year.

Matthew Griffin and Noah Legault will add depth to the receiving corps.

Throwing to those receivers will be senior quarterback Clayton Jenkins, a third-year starter who will provide experience and stability to the West Hall offense that will look to improve on its low point total of just 78 during the entire 2019 season. Davidson may also take some snaps in wildcat quarterback situations.

Montgomery also said the addition of quarterbacks’ coach Bruce Miller should help Jenkins and the entire quarterback room improve. Miller is a former state-championship winning head coach at Gainesville and also held assistant coaching jobs at Lakeview Academy and Flowery Branch over the past three seasons.

Josiah Henriques will be the primary option at running back to replace Riley, with Alijah Porchia expected to get significant carries as well. West Hall will look to get as many players involved in the running game as possible.

First-team all-region performer Regan Byrd will return to anchor the Spartans’ offensive line. Beyond that, Montgomery said the unit will rely on some younger talent to step up to fill out the line.

West Hall will continue to operate out of a spread offensive set and Montgomery said many of the team’s skill positions players will play in several spots to try to keep defenses guessing.

The West Hall defense looks to be much improved, with all but two starters from last year returning, making it one of the most experienced units in northeast Georgia. Montgomery said 12 of the team’s top 15 defensive players from 2019 will be back on the field in 2020.

Improvement will be needed after the unit surrendered more than 460 total points in 2019. Still, the unit looks to feature a number of outstanding players.

The secondary looks to be the strength of the defense, with first-team all-region standout Sam Holcomb returning at safety and joined by returning starters Jaden White, Jonathan Hall and Noah Legault.

One of the defensive leaders is expected to be junior linebacker Talil Blackwell, who was also a first-team all-region selection in 2019.

“I saw him, he was dropping off something at the school with his family during the quarantine deal, and he’s been training, and he looks as good as I’ve ever seen him, so I’m really looking forward to seeing him back in the pads,” Montgomery said.

Blackwell will lead the linebackers where he’ll be joined by junior Black McCray and senior Brian Ayers.

Montgomery is hoping the returning talent will help the Spartans compete in the new Region 7-3A. West Hall joins the region as they move down in classification, coming from the hyper-competitive Region 7-4A where they battled with state powerhouses such as Blessed Trinity, Marist, Flowery Branch and Denmark.

“Knowing what we were going against last year, I mean, seven out of the ten teams we played made the playoffs,” Montgomery said.

West Hall’s non-region schedule also looks to be more forgiving. Instead of perennial powers Commerce and Jefferson, the Spartans will start the season with a home date against East Jackson before facing Hall County foes East Hall and Chestatee.

However, Week 3 will still be the highlight of the non-region slate, as the Spartans travel to Billy Ellis Memorial Stadium to take on arch-rival Johnson in the Battle of Oakwood. Revenge will be the name of the game for West Hall, after falling to the rival Knights last year, snapping a six-game winning streak in the series.

West Hall joins Region 7-3A alongside White County, who also dropped in classification from 7-4A. North Hall, Cherokee Bluff, Dawson County, Lumpkin County and Gilmer will round out the rest of the Spartans region schedule.

While Montgomery said he still expects a fight throughout the region schedule, he believes the slate provides opportunities for the Spartans to fight for a playoff spot.

“On paper, you’re probably looking at Dawson County, White County and it’s hard to count out North Hall at the top of the region. It’ll definitely be a tough region,” Montgomery said. “We’re looking forward to this though because there’s not a team on that schedule that you don’t say ‘man, we feel like we can put together a great plan and go after this.”

While the Coronavirus pandemic heavily interrupted every school’s offseason preparation, Montgomery said he felt his team has made strong strides towards putting an improved product on the field in 2020.

He said what little time the team was able to spend showed good results.

“We’re feeling really good. Our 40-yard times have improved. Some of the issues we’ve had in years before are gone. I feel really good about what we have moving forward. The players have bought in. We’ll see how things go.”