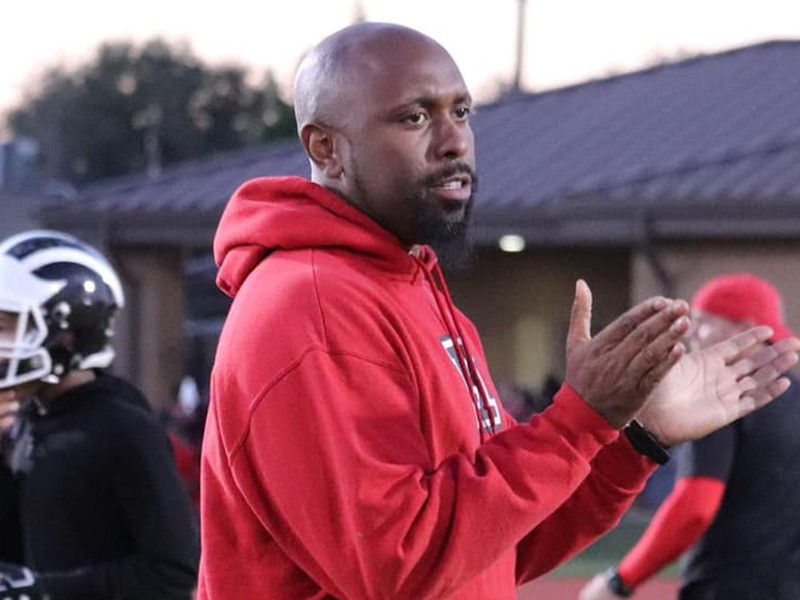 William Harrell enters his first season as head coach of the Johnson Knights. He comes to Oakwood from Hephzibah just outside of Augusta, where he led the historically struggling Rebels to their best two-year record in program history along with back-to-back playoff trips in 2018 and 2019.
Photo/Jennifer Garcia

OAKWOOD — Players at Johnson by now are no stranger to fresh starts.

In first-year head coach William Harrell, the Knights will be playing under their third head coach in three seasons, which is not typically a formula for success. Despite the turnover, however, they have seemed to be a program on the rise, winning four games in each of the past two seasons after winning just four games total from 2014 through 2017.

Harrell is no stranger to reinvigorating a program as he takes over a Johnson team that has not made the postseason since 2004. He comes to Oakwood from Hephzibah just outside of Augusta, where he led the historically struggling Rebels to their best two-year record in program history along with back-to-back playoff trips in 2018 and 2019.

While Harrell says there are differences in the two schools, he believes Johnson has the tools necessary to replicate that success.

“Johnson actually has way more resources than what I had at Hephzibah,” Harrell said. “The challenge here is getting the athletes out. Once we get them out and get them developed, then I think we can make some progress.”

So far, world events have not exactly cooperated with Harrell’s efforts. He says the Coronavirus pandemic has made recruiting the school’s hallways difficult and that could have a negative impact on the team’s roster size this year.

Experience may also be a challenge, as Johnson graduated a large senior class from 2019 and will need to replace a number of key players on both sides of the ball.

“The keyword is ‘patience’,” Harrell said. “Hephzibah wasn’t built overnight. I don’t expect Johnson to be built overnight, especially in light of the (Coronavirus pandemic) situation.”

The Knights will operate out of a single-wing offense. Harrell said he believes the system gives his staff the ability to play to the strengths of their roster.

He says their run-pass balance will also be determined by their personnel.

Senior Justin Long will take over quarterback duties for the Knights as they transition to their new look. He’ll have help from junior running back Dayshun Summerour and tight end Jake Shaw.

The offensive line will feature a number of new starters, but junior Allen Gutierrez will provide some returning experience and Harrell said he feels good about the group as a whole.

Defensively, Johnson will look to play a disruptive 3-4 style with an emphasis on creating chaos for opposing offensive lines.

The Knights will return three starters to the defense in lineman Darrion Thompson and linebackers Juan Allen and Antrevious Jackson.

Harrell says he feels confident about the Knights offensive and defensive lines, but experience at skill positions will be a question mark magnified by limited time in the offseason to get new starters comfortable with new systems on both sides of the ball.

One position Johnson will return some experience and talent to is kicker, where senior Stephen Flores comes back after a strong 2019 season. Flores was the hero in Johnson’s thrilling win over West Hall by connecting on a 38-yard field goal as time expired.

Johnson’s non-region schedule will be similar to previous years. The Knights will open the season on the road at Cherokee Bluff and then have an off week before hosting this year’s Battle of Oakwood against arch-rival West Hall.

Last year’s thriller against the Spartans snapped a six-year losing streak in the series for Johnson.

“I know those guys are going to come back motivated to try to avenge that loss and we’ve got to make sure that we play our best game and have our minds focused when we go against them,” Harrell said.

After that matchup, Johnson will wrap up non-region play with a road trip to East Hall. Then region play begins the next week.

The Knights will be a returning member to a very different-looking Region 8-5A. Newcomers include nearby Jackson County and Apalachee, but also geographic outliers such as Eastside and Greenbrier.

Johnson returns to the region alongside defending champion and state quarterfinalist Clarke Central as well as Loganville and Walnut Grove.

“When we go into our region, it’s wide open. You’ve got Clarke Central, which a lot of people are going to pick as being the favorites. Eastside had a really big season last year, and then after that, literally it's all over the board.”

Harrell said a key matchup in the region for Johnson will be Walnut Grove. The Knights beat the Warriors in a four-overtime marathon last year for the program’s first region victory in a decade.

Games against Jackson County and Greenbrier will also likely be must-wins if Johnson hopes to be a serious contender in the playoff race.

“I don’t really have any team which I can just pick and say ‘okay, that team’s just not going to be good’. I think every team is going to be in the same boat in terms of what they’re going to have to face,” Harrell said.

There were several reasons Harrell said it was the right time to leave Hephzibah to come to Johnson. He said a primary reason was to be closer to his hometown of Atlanta, but he also said he felt that the culture at Johnson was one prime for him to work in.

“I know there are multiple schools in Hall County, but Johnson still has its own niche and it has its own culture in terms of what the school stands for,” Harrell said. “I was looking for a school that had that type of atmosphere. It was a combination of things that went into it.”

“On top of that, there’s a really great administration here. Jonathan Edwards, Tony Wagner, these guys are really trenched in having a great culture, not just on the field, but off the field. When I got the chance to meet them, I knew right away that if I got the opportunity, that this definitely was a place I wanted to be at.”

Harrell said Johnson’s lack of recent success could make it a program willing to invest in a long-term build and he said that could provide an opportunity to create a lasting culture.

He says he’s in for the long haul as well.

“I’m not in a situation where I am going to force the issue where if it doesn’t happen in one or two years, I’m going to panic. I’m in a situation in which we’re going to do everything we possibly can do every year and this year is no different.”

“(Johnson) is not just a stepping stone, not just as a place to be for a couple of years, but a place I can really set up roots and be here for the long haul.”