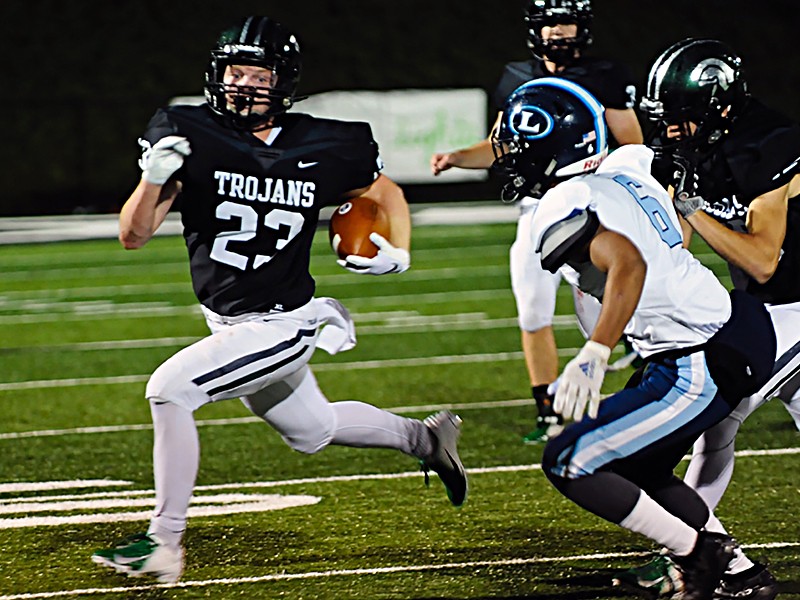 Clark Howell is expected to be a leader in 2020.
Photo/Jim Haynes

GAINESVILLE — When the final horn sounded last season at Crisp County in the second round of the Class 3A playoffs, David Bishop’s mind began to wonder how he would fill the massive void left by his senior class.

Out of the 19 seniors on last year’s 8-4 playoff team, all of them contributed in some way on the field and most of them were a significant part of the team’s run in 2019.

Bishop finds himself with a hammer and boatload of nails to build back the program that he’s led over the last 11 seasons in 2020.

The coaching staff will have the daunting task of filling nearly every position on the field that produced more than 2,500 total yards of offense, averaged 30 points per game and racked up more than 300 tackles.

"Those guys contributed so much to us and, not just us, but all the programs at North Hall,” Bishop said. “But with graduation, our biggest issue again becomes depth. We do feel like we have some kids that can fill the holes, but we just don't know yet because none of them are tested. I think that's the biggest issue going in.”

Trying to start the rebuild hasn’t been an easy task because of the COVID-19 shutdown. Normally, teams across the state already have played in several 7-on-7 tournaments and traveled to 11-on-11 camps to work out roster issues, but the pandemic shuttered those opportunities.

“It has put us way behind because of our youth and, as I said, there's no experience on the team,” he said. “So, yes, you can definitely say that COVID-19 has us way behind, especially on defense.”

And that’s where the rebuild is most important for the Trojans.

This year, only two return with significant playing time on defense, including senior four-year starter Dalton Battle, who led the team in tackles at linebacker in 2019, despite playing in only five games, and cornerback Keegan Smith.

“It's paramount that Dalton leads this year,” Bishop said. “He only played in five games last season because of injury and was still named to the All-Region team. He's normally a reserved quiet kid that works hard and, now, he has to be more vocal and push people and try to lead in a positive manner. He hasn't had to lead in the past because we've had strong leadership over the last two years. Now he has to be that guy.”

Battle will be joined by sophomore Jeremiah Telander at inside linebacker.

Senior Kalab Wyatt will mix in on the other side at cornerback, and freshman Ajay Jones will see some time there as well.

Senior Clark Howell and juniors Tate Brooks and Bradford Puryear are expected to fill in at safety.

But the defensive line is where the biggest question marks lie. Bishop has shifted juniors Jarrett Latty, Austin Copper and Kevin Rochester from linebacker to D-line. Senior Nate Cottrell and junior Zane Hall also will vie for a spot, leaving the Trojan line full of greenhorns.

“None of those guys have any time upfront,” Bishop said.

Offensively, Bishop’s tried and true iconic groundhog Wing-T offense will look a bit different this season and, like the defense, there are a lot of new pieces.

Last year’s offense averaged close to 300 yards per game on the ground and, oddly, passed for more than 100 yards in four of the 12 games last season. It also boasted a per-carry average of seven yards.

But in 2020, Bishop will have to rebuild the two most important units to his grueling rushing attack: the O-line and the running back stable.

Across the front, Latty returns to possibly anchor the O-line at center. He did play guard and tackle at times last year.

Bishop said he’s not sure where his most seasoned lineman will play but is glad to have him back to mentor the younger guys upfront.

“He started in all three spots and did well for us last year,” he said. “Not only are we bringing back a quality player that started as a sophomore but a very intelligent guy. He understands our offense and can play anywhere we need him. The question is going to be who can step up in those other spots.”

Right now the O-line depth chart has Kyler Olsen at center, Copper and Latty at guards and Mason Newberry and Drew Chambers at the two tackle spots. Dalton Battle will mix in at tight end

"The positive and one of the greatest parts that we have is our offensive line is super, super smart,” Bishop said. “Whether they're able to execute on a Friday night is a totally different thing. If they can't execute, the whole offense doesn't execute well.”

In the backfield, Howell, who totaled 326 yards in five games last season, will be the first man up at halfback. He was called on against Lovett in the first round last season for the injured Fair and rushed for 187 yards and three touchdowns to lead the Trojans past the Lions, 24-21.

“He's got to step up this year,” Bishop said about Howell. “He came in when JT was hurt and helped us get through Lovett. There’s a lot of potential there.”

Behind him will be Brooks, Smith, Jones and Clay Stover, and Rochester, Austin Atha and Alston Self will mix it up the tailback duties.

With the graduation of quarterback Trey Sanders, Bishop will have a two-way battle for a new quarterback. Puryear is the front runner but will have competition with senior Parker Caudell.

“It will be a two-way battle,” Bishop said. “Obviously, with Bradford having that extra year as the backup is going to be helpful and beneficial and probably give him the edge over the Parker.”

At wide receiver, Wyatt and Cameron Crisp are expected to be in the lineup.

“We're going to look a little bit different,” Bishop said. “Over the last two years, we were a home run team. We had a lot of plays over 20 yards. This group has potential skill-wise. We’re going to move a lot of people around so we can get the best 11 players on the field at all times.”

The schedule will present the Trojans with plenty of challenges, especially early on. They’ll open at The Brickyard against Class 6A Paulding County, then travel to Stephens County, back home against an athletic Hart County and a road trip to rival Chestatee on Oct. 2.

The six-week trek through the brand new Region 7-3A will open at West Hall on Oct. 9 and will include two huge road games in a three-week span against arch-rival White County and an improved Gilmer County team with a home meeting with Lumpkin County sandwiched in between. They’ll finish the season with two important battles at a much improved and revamped Cherokee Bluff before heading back home to battle Dawson County for what could be for a  playoff spot.

“I think the region is a little closer now in terms of talent,” Bishop said. “I think on any Friday night anybody can beat anybody, which is always a little more fun."