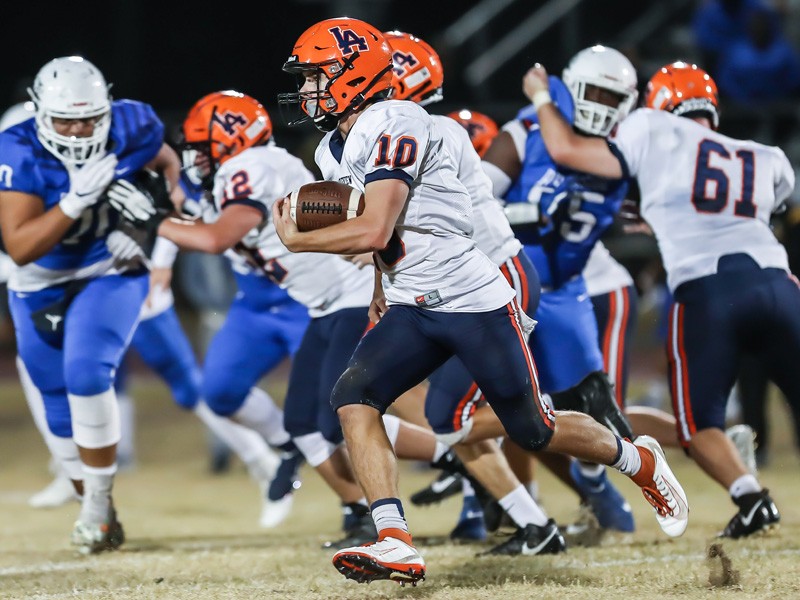 GAINESVILLE — Lee Shaw knows a thing or two about building a football program.

The man that built Flowery Branch from nothing to a powerhouse program and duplicated in Rabun County was lured out of retirement to replace Matthew Gruhn, Lakeview Academy’s first and only football coach, in February.

“This is very exciting for our school and for our football program,” Lakeview Academy Athletic Director Deuce Roark said in January. “His resume speaks for itself. He’s built some incredible programs around this area, does a great job working with the kids at each program and is exactly what we were looking for when the position came open.”

Now, perhaps the biggest challenge of them all is nestled on a hill off Lakeview Drive.

“They’re so excited about football,” Shaw said. “They’re hungry for some success, and they’re working as hard as any team I’ve ever had -- as far as an effort goes.”

Shaw says the biggest obstacle of changing those stats lies in the attitude, belief and culture change at the school.

“They’ve not experienced success in football,” he said. “They have not experienced the importance of a community getting on board. It’s kind of a culture change, and that’s changing already. People have to believe that we can win. We’ve got to believe.”

Shaw immediately hit the ground running after his hire in February, implementing morning workouts and recruiting the hallways.

Lakeview doubled-down on its commitment to building a football program with a brand new $2 million football stadium, which is scheduled to be completed by this fall. Also in the future plans is a field house near the new stadium – all things that are proving Lakeview Academy’s administration want to improve the program.

Shaw will install his iconic football blueprint – the same one that turned Flowery Branch and Rabun County into powerhouse programs. He’ll stick with the spread offense and shift to a 3-3 stack defense.

He also has participation numbers up near 40 players, a big jump from last year’s 22 players.

“They believe in the blueprint that I laid out for them,” he said. “There’s been a real buy-in from the staff, coaches and players. We want to change the culture here. Our coaches are dedicated to Lakeview and want to win football games.”

Despite the COVID-19 shutdown earlier this year, Shaw was able to evaluate his talent before the pandemic closed school for three months, and, because of that, he has a strong plan in place.

Seniors Ben Puckett and Jesse Whiting, transfer from Jackson County, will vie for the starting quarterback spot, and whoever loses, will be starting somewhere on the field.

“I’m excited to watch those guys go at it,” he said. “They’re both really good athletes. We’ll have two really good quarterbacks. If one goes down, we’ve got another one capable of winning games for us.

Out of the backfield, senior Bodie Blackwell will get the majority of the totes, but sophomores Luke Cooper and Landon Hanes also will get some carries.

“Right now, Bodie is our team athlete,” Shaw said. “He’s got a lot of games under his belt. He is our go-to guy on the team. We’ve got some young guys that will be in the mix as well.”

The offensive line, however, took the biggest hit – four of the five guys graduated in the spring – leaving Christian Haynes as the only returning starter at tackle.

Senior Parker Allen will help out at tackle and his brothers, Tanner Allen and Hunter Allen may mix in as well.

“Sam is a really good athlete,” he said. “He’s got some speed and will play multiple positions. I really like what I see out of him so far. I’m also really excited to get Skylar and Conley on the team because they can definitely help us win.”

Shaw will switch Lakeview from a 4-2-5 into a 3-3 stack defense. It’s the same defense he ran for years at Rabun County and will count on a lot of the same players to be productive.

“We’ve got good kids in some spots,” he said. “The biggest question, though, is will the defense play with relentless effort, and that will come as we continue to coach them up.”

Haynes and Allen will play the defensive end positions, Perrot and senior James Michael Harrison will man the corners. In the middle, Cooper returns at linebacker and Blackwell is the last line of defense at free safety.

“We’re going to count on our senior group to lead us,” he said. “We’ve got some good ballplayers and I tell people all the time that going into Lakeview, you look at maybe their record in the past or whatever negativity that might have been on their back, there are some dudes that can play.”

The Lions schedule will look nothing like the last four years. The GHSA completely split Class A into Private and Public, leaving Lakeview in the new Region 6-A Private with Fellowship Christian, King’s Ridge, Mount Pisgah, Pinecrest and St. Francis.

They’ll open the schedule at home against Mount Paran Christian, followed by two straight road games to Darlington and Walker, then back home against former region foe Towns County.

The new region looks to be more level for the Lions, and with Pinecrest dropping the football program this year, it gives the Lions a better shot of making the playoffs for the first time ever.

“It does help us when it comes to making the playoffs, but we also lose a game,” he said. “And trying to find somebody that late in the season to play is almost impossible.”

“But I would have to say St. Francis may be the lead dog right now,” he said. “I’m not really familiar with the private school league, but I’ve played against Frank Martin before and he always has a good team. We’ve got a tough schedule overall, but if we get them in the right schedule and stay healthy, we can win some football games.”