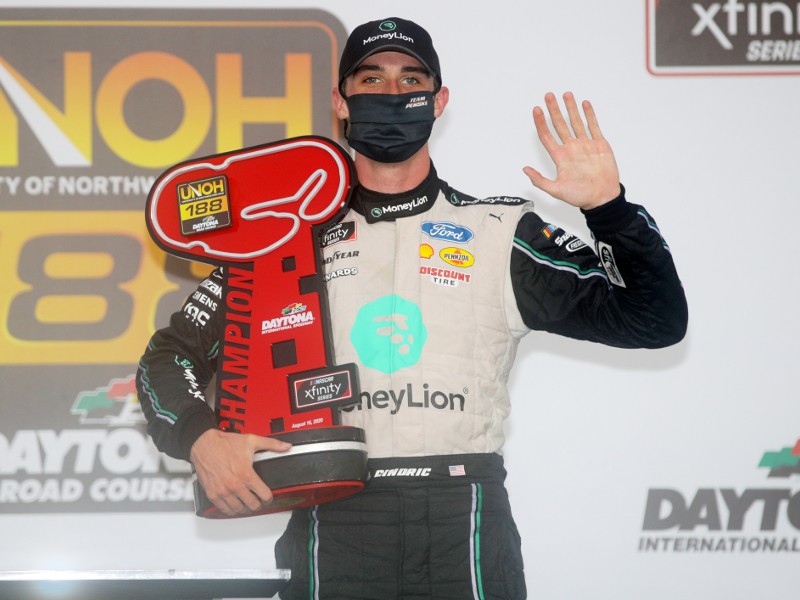 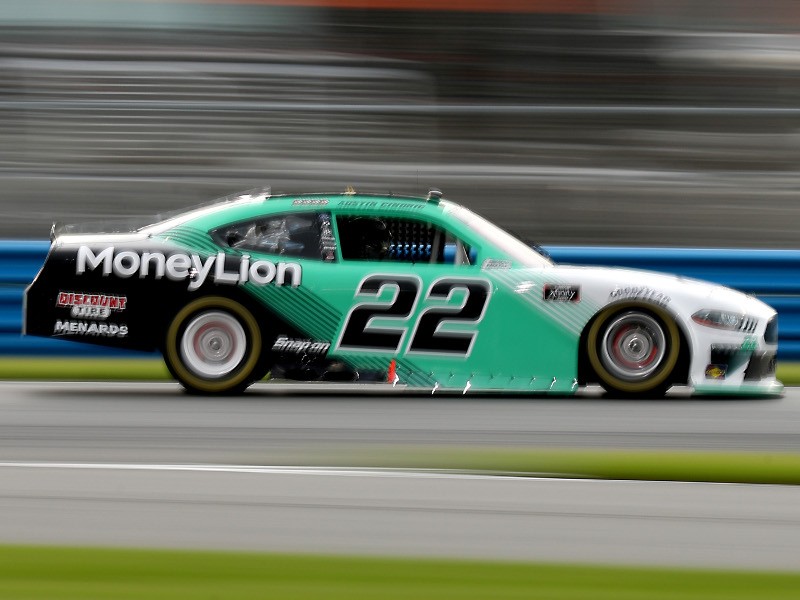 It gives the 21-year-old his seventh career series victory, and he becomes the first driver to win in a NASCAR Xfinity Series race on the 14-turn, 3.57-mile road course that’s made up of a combination of an infield course and the high banked NASCAR oval.

“I’m not sure anyone was really happy with their race car,” said Cindric. “Unfortunately, I have a tough perspective of driving really fast high-grip race cars at this track, but great credit to my team – the MoneyLion guys – and everyone that puts this together- Ford Performance, Roush Yates Engines, obviously everyone at Team Penske for working hard.

“That’s five wins on the year and back-to-back now. I’m really proud of that. I didn’t feel like I drove my best today, but we executed there at the end where it counts and that’s what makes these races so difficult to win.”

Cindric was following Chase Briscoe on a restart with just a handful of laps to go when Briscoe several cars made contact going into the first turn, gathering up several of the leaders. Briscoe would tangle with Preston Pardis one turn later, sending both spinning and bringing out the caution. Cindric, meanwhile, avoided the problems and moved to second place as the caution flag flew.

On the ensuing restart, Cindric stalked leader Brandon Jones, making the final pass for the lead with four laps to go. From there, Cindric moved away to win by over a six second margin.

“A lot of the restarts I kind of learned by my own mistakes as far as trying to drive it in deep three-wide,” said Cindric. “There was less and less grip it seemed like there as the race went on, or maybe patience went out the window. I saw guys lock up tires and I was fortunate enough to be on the inside and not get collected and was able to get a good restart and come away with it.”

For Cindric, it marks five series wins in the past six races – a feat accomplished only by one other driver, the legendary Sam Ard.

“Yeah, it’s incredible and takes great race cars and executing races,” said Cindric. “I’m proud to be driving this 22 car and contending for wins week to week. There’s still a lot of work to do, but this is great for the points for sure.”

It looked like the fight for the win would come down between the two drivers that had battled at the front for most of the 188-mile event – Cindric and Briscoe.

The two drivers battled back and forth, making contact several times as they battled for the lead at the end of the race’s second segment.

As the race entered the final segment, Briscoe made his way back to the lead, with Cindric in tow. Behind them, road course ace A.J. Allmendinger made his way to third, and was working to close on the leaders.

Cindric was keeping Briscoe in sight, looking to challenge for the lead when the caution flag flew with eight laps remaining for debris from the car of Earl Bamber.

While the leaders hit pit road, three cars stayed out, setting up the wild restart that eliminated Briscoe and sent Allmendinger back to pit road.

Cindric avoided the trouble, and once back under green, chased down Brandon Jones for the lead, and drove away easily for the win.

Briscoe, who led the most laps on the day with 26, finished a disappointing 29th after his car was too heavily damaged to continue.

“I had a flashback to Kansas there when they all pushed up into turn one,” the Atlanta, Georgia racer said. “I hate there was a caution because I know (Austin) Cindric was lights out fast, but I think we could have at least gotten pretty close there the end to possibly winning this thing.”

Noah Gragson, who was leading the race before an off-track excursion and contact with the guardrail sent him back in the pack, finished in third, while Allmendinger recovered for a fourth place finish. Andy Lally came home in fifth.

The start of the race was delayed by about an hour and a half due to lightning and rain. On the drop of the green flag, Cindric moved out to the early lead and moved away from competition.

While Cindric dominated the first segment of the race, several drivers had issues navigating the road course layout – one they were racing on for the first time with no practice or qualifying.

Several drivers had to endure stop and go penalties after missing the turn four chicane, while others were left with heavily damaged cars after digging into the soft mud in the backstretch chicane.

Meanwhile, Briscoe’s team had chosen to start the race on rain tires after a miscommunication, and had to make an early pit stop to move to slicks.

He wasn’t the only one who suffered an early setback, as Allmendinger was penalized a lap for a pit road violation, and had to work his way back into contention.