Wolves ready for move up to Class 6A 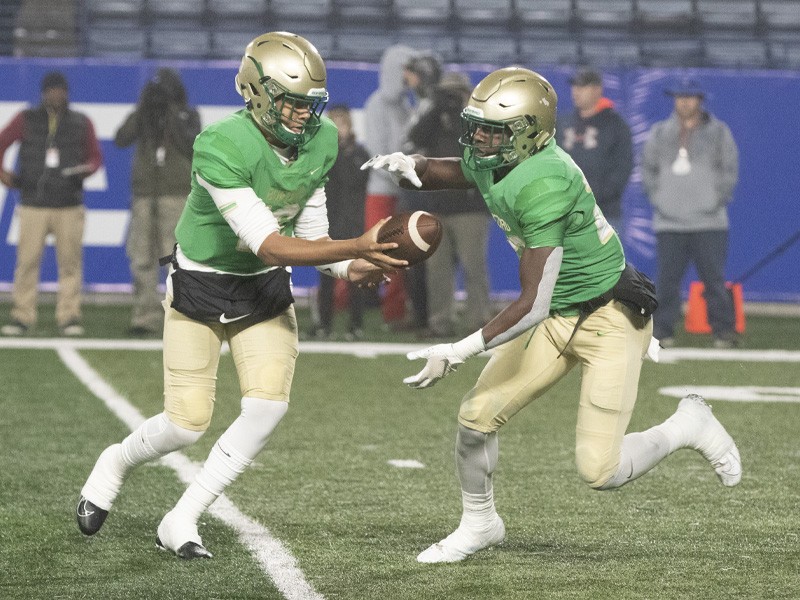 BUFORD — It’s hard to imagine what kind of an encore Buford can put together in 2020 after one of the most magical rides the storied program has ever taken in 2019.

The Wolves promoted long-time assistant Bryant Appling to head coach to reinvigorate the “Buford Way” into the program. He and his staff answered by leading them to their first state title since 2014 in dramatic fashion.

Buford got game-winning field goals on the final play in both the quarterfinals and finals to capture its 12th overall title. How improbable was it, even for a program like Buford? It was just the 20th time in Georgia High School Association history, going back as far as 1948, that a head coach in his first year at a school has guided his team to a state championship.

“I can understand why there are not that many people to do that,” Appling said. “Even when you’ve been a coach a long time it’s hard to do. I was blessed to have great coaches around me, great kids that wanted to get better, and an administration that was supporting what we were wanting to do.

“As for an encore? I just hope we don’t drop off too much this season. I’ve talked to all the great coaches (at Buford) like Dexter Wood, Gene Durden, Tony Wolfe on how to keep this going. Last year is behind us. How we prepare for this year will determine how well we do.”

The preparation for the 2020 season will be nothing like the Wolves have encountered since beginning a run of 11 state titles in 18 seasons in 2001. They have moved to Class 6A, and a brutal and revamped Region 8-6A in particular, and probably for the first time since 2001 they may not be the favorites to win their region.

Four-time defending region champion Dacula -- a semifinalist each of the past two seasons -- and Lanier (a semifinalist in 2018) have dominated the region since 2015. Overall they have won six of the last seven region titles combined. Six of the seven teams in the new configuration made the playoffs in 2019. The Falcons and Buford, who have not met since 1993 while both were in Class A, will close out the season on Nov. 20 at Tom Riden Stadium. That will come two weeks after the Wolves head to Lanier, which is less than two miles from their new home on Buford Highway, for their first-ever meeting.

Region 8-6A also added a pair of Class 7A teams in Shiloh and Central Gwinnett and still has Habersham Central, which was just two plays from making the playoffs in 2019.

“This is going to be one of the best regions in the state,” Appling said. “All the teams have talent and every game is going to be a dogfight. We’re very happy to have some good neighborhood rivalries now.

“Also having the chance to add some new Gwinnett schools to our schedule is fun. We are very excited about where we are right now. ”

What could make the Region 8-6A race so compelling is that Dacula and Lanier both return experienced squads. The Wolves can counter with a fully-stocked cupboard of their own despite losing three Power 5 players and seven overall signees.

Senior Gabe Ervin (179 car., 1,210 yards, 12 TD) and junior Victor Venn (107 car., 764 yards, 9 TD) give Buford one of the most potent backfields in the state. Senior Jarvis Evans (78-for-130, 1,425 yards passing, 18 TD) returns as does junior Ashton Daniels, who helped lead a fourth-quarter rally in the state title game, at quarterback. Seniors Caleb Archer and Jacob Smith return to anchor the line.

The offense averaged 34 points a game in 2019, but that was down from the 42 ppg and 41 ppg they averaged the two previous seasons. The one big question mark on the offense may be along the front.

“We have a good (offensive) line but depth may be an issue, especially now that we’ve moved a class where typically the teams are bigger and have more numbers,” Appling said. “Developing depth is a high priority for us.”

The defense, however, already is being mentioned as having the potential to be one of the best in program history. Seniors Nick Perry and Tommy Beuglas and juniors Malik Spencer and Aubrey Smith anchor a returning linebacking corp that produced 282 tackles, 13 tackles for loss, and 11 sacks in 2019. Senior Amari Wansley and junior Jake Pope will spearhead a talented secondary.

“We lost a lot of quality players from last year but we also return a lot of guys, especially some younger kids that got some big-time playoff experience,” Appling said. “I really thought our defense got better and better and I think this year it could be one of the best units we’ve ever had here, at least in my 16 years here. We’re excited to see what they can do.

“And last year I don’t think our offense got enough credit. Our goal was to control the game with our rushing attack and I thought we did a great job of doing that. The points will be down somewhat when you shorten the game. We should be even better (on offense) this year but I don’t think we’re going to be able to sneak up on anyone.”

The biggest question mark for the Wolves may be at special teams, where they will have to find a replacement for kicker Hayden Olsen. The Tennessee Tech-signee was nearly automatic, especially in the playoffs, booting both game-winning field goals, the second in overtime in the finals.

“Hayden was something special and that is a big hole to have to fill, no doubt,” Appling said. “But we have some guys we’re looking at that we think have a chance to be real good.”

With a new classification and region, new rivalries, and knowing that a target will be on their backs, the 2020 campaign could be one of the most compelling for the Wolves in recent memory. And Appling was adamant that what happened in the past, stays in the past.

But he also said comfort for him and his staff, and the players, could play a major role in 2020.

“Every year and every team is different. You can’t compare one team to another really because the make-up of the kids and the chemistry, everything is different,” he said. “We can’t hang onto last year. That’s gone. It was a truly special season but you have to move on.

“We also know that because we’re Buford people will always look to us and give us their best game. We welcome that because it makes us better and we all love the competition.

“But as a program, I think we’re all a little more comfortable coming into this season because it’s our second year as a staff and the kids understand what we’re asking of them.”

But another slice of history is also within the Wolves’ grasp in 2020. With their title last year they became the first school to win championships in five classifications. Another title run would allow them to add another footnote to their bio.

“That’s cool as well,” Appling said. “But we don’t worry about those kinds of things. Our goal last year was to bring back Buford football to the style and expectations that our community expects. I feel we did that.

“Now, the goal is to try to build on that and continue to grow as staff, a team, and a program. If we do that, everything else will take care of itself.”