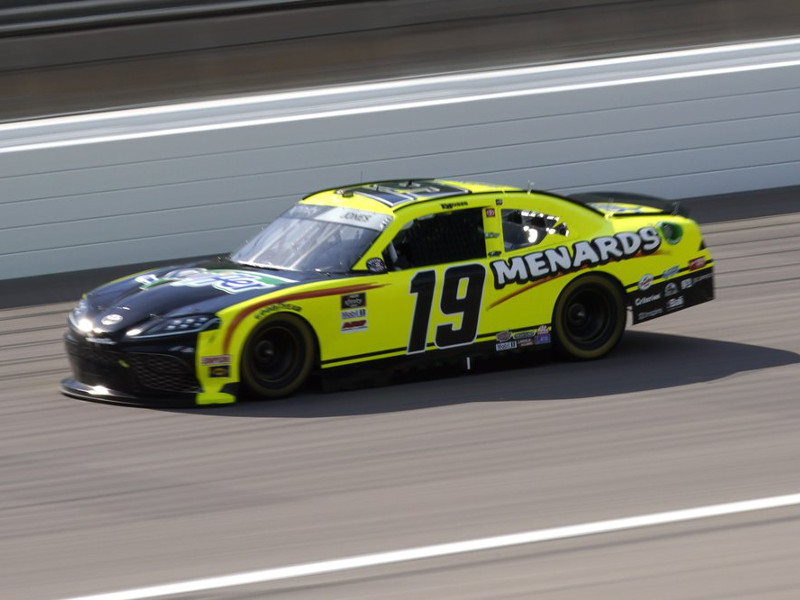 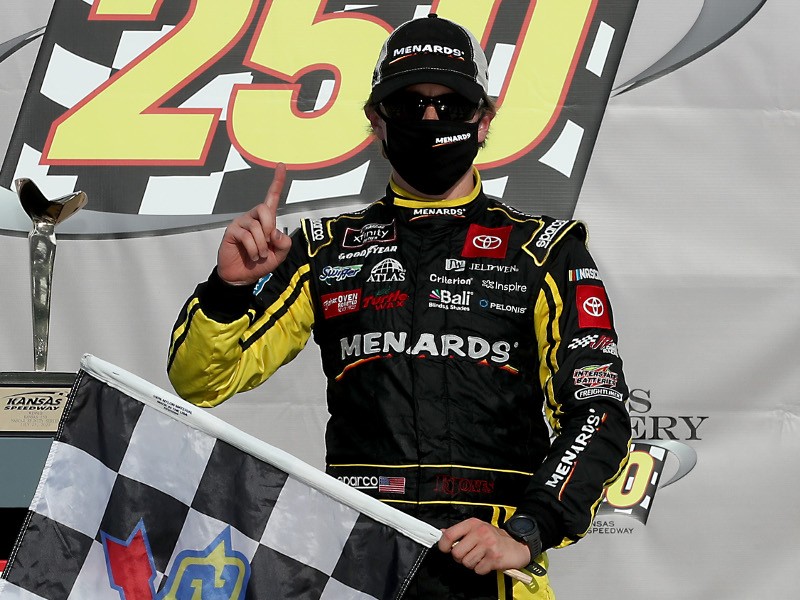 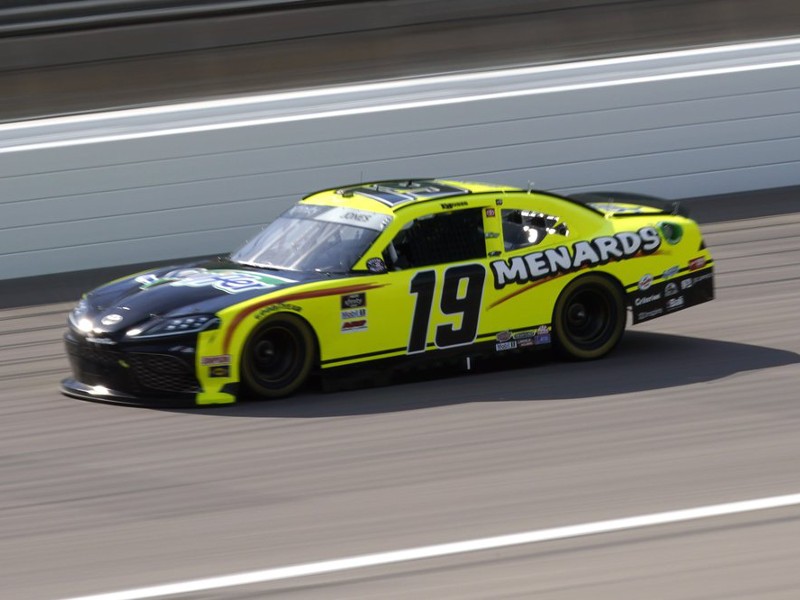 On the final lap of overtime in Saturday’s Kansas Lottery 250, Brandon Jones stole a victory and a piece of history from Austin Cindric.

Restarting from seventh place in the second overtime attempt, Jones charged forward and wrested the lead from Cindric, who was less than one lap away from tying Sam Ard’s NASCAR Xfinity Series record of four straight victories, a feat Ard accomplished in 1983.

After Cindric led lap 174, the seventh circuit of overtime, Jones got a run underneath the No. 22 Team Penske Ford and powered his No. 19 Joe Gibbs Racing Toyota past Cindric through turn 1. The Atlanta, Georgia racer crossed the finish line .405 seconds ahead of the No. 22 Mustang.

Harrison Burton, who had the fastest long-run car in the race, finished third. Burton had a comfortable lead over Cindric when Joe Graf, Jr.’s brush with the turn 4 wall on lap 164 of a scheduled 167 brought out the fourth caution and sent the race to overtime.

After the first attempt at overtime was foiled by Jesse Little’s spin in turn 2, Jones came from the fourth row to score his second victory of the year, his second straight at Kansas and the third of his career.

“We’re never out of this thing — that’s what I love about these guys (the No. 19 team),” said Jones, who ran the Friday/Saturday Truck Series doubleheader before climbing in the Xfinity car on Saturday afternoon. “We keep our head in the game. We don’t get excited during these races. We continue to make changes.

“My feedback, I think, was pretty good. It’s been a long two days. I feel exhausted, and obviously, the heat is big here. Looking forward to celebrating with these guys, and it feels great to be back in Victory Lane.”

Jones has finished seventh and first in the last two races, after a hard-luck string of four events in which his best finish was 30th.

Cindric was gracious in defeat but had to second-guess his choice to leave the inside lane open on the final lap.

“There’s about 20 things I feel like I should have done differently,” Cindric said. “It was difficult, because up higher was preferred all day, and you could usually generate momentum. I didn’t know that we didn’t quite get the right adjustment there at the end, so I was probably tighter than I needed to be, but, overall, watching the replay, he (Jones) got a hell of a run on the bottom, and I knew he had some momentum.

“If I maybe would have known he was coming from the bottom, I probably would have pulled down to slide myself into (turns) 1 and 2 and been able to fight for it in 3 and 4, but, overall, congrats to him. He earned it. He went from seventh to the lead in two laps. It’s like the third or fourth time we’ve lost on a green-white-checker after being the leader at the line. There are a thousand different things you can do right and wrong and you’ve got to trust your gut and trust the car is going to stick. Overall, it just wasn’t in the cards for four in a row.”

Cindric was strong on restarts, but Burton twice was able to run him down from deficits of three seconds or more during long green-flag runs. Burton had taken the lead with nine laps left in regulation and pulled out to a cushion of more than one second before Graf’s incident in Turn 4.

The runner-up finish and a sweep of the first two stages propelled Cindric past 14th-place finisher Chase Briscoe to the top of the series standings. Cindric leads Briscoe by four points heading to the Road America road course two weeks hence.

Ryan Sieg solidified his hold on a Playoff position by staying out on older tires during the fourth caution and finishing fifth. Eleventh in the standings, Sieg now has a 66-point lead over Jeremy Clements in 13th. Twelve drivers will qualify for the Xfinity Series postseason.