3:31PM ( 47 minutes ago ) Radio Alert
The NASCAR Xfinity Series race at Daytona is under a weather delay 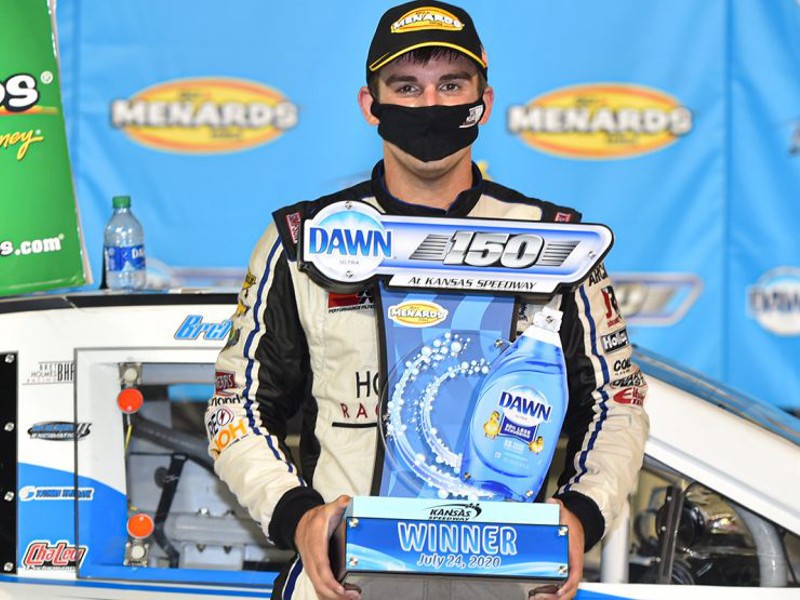 KANSAS CITY, Ks. — Following a string of strong runs, Bret Holmes finally got to experience the emotions of standing in Victory Lane in the ARCA Menards Series.

He earned that with a dominating performance Friday night in the Dawn 150 at Kansas Speedway.

The 23-year-old Munford, Alabama, driver put the family-owned No. 23 Holmes II Excavation Chevrolet out front for 82 laps and crossed the finish line 14.458 seconds ahead of runner-up Ryan Repko.

It was the first career win in his 69th career start for Holmes, who began racing in the series as a 19-year-old in 2016. After a third-place finish in the championship standings last year, Holmes put together five straight finishes of seventh or better — including a second and two thirds — since the return to racing in June.

“We’ve been working so hard for this,” said Holmes, who had led 42 laps in his career and just 17 before this season. “I’ve been working my whole life for this. My team did this for me. It’s been a long tough road. I just thank my family and my friends. They believed in me when I didn’t.”

Riley Herbst, who started on the pole because the starting lineup was set by owner’s points, finished third. Corey Heim was fourth and Tanner Gray overcame an early penalty to take fifth.

Championship points leader Michael Self was sixth. It was his eighth straight top 10 to start the season but also represented back-to-back finishes outside the top five. That has allowed Holmes to chop Self’s points lead down to nine.

Dollar was seventh, with Derek Griffith, Hailie Deegan and Thad Moffitt rounding out the top ten.

Dollar, Deegan and Moffitt are third through fifth, respectively, in the points.