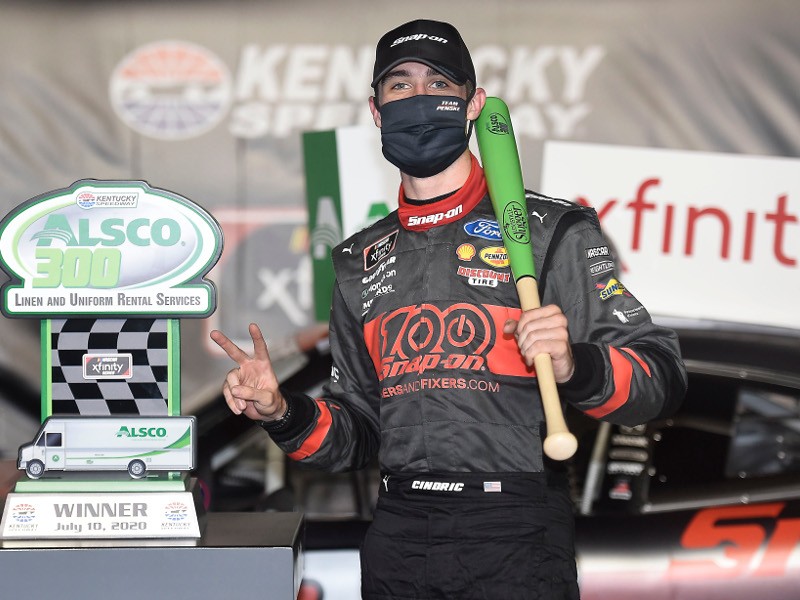 When he took the green flag at Kentucky Speedway on July 9, Austin Cindric had no NASCAR Xfinity Series victories on oval tracks.

When he took the checkered flag later that evening, he had his first. A day later at Kentucky he had his second, becoming the first driver to win races on consecutive days in the same series since Richard Petty accomplished the feat in the Cup Series in 1971 at two different tracks.

Last Saturday, Cindric picked up his third consecutive oval victory when ostensible winner Kyle Busch was disqualified for a ride-height infraction. NASCAR Hall of Famer Mark Martin is the only other Ford driver to have won three straight Xfinity Series races, a feat he accomplished at Rockingham, Richmond and Atlanta in 1997.

On Saturday, Cindric will try for a fourth straight win in the Kansas Lottery 250 at Kansas Speedway. That would tie the series record for consecutive victories set by Sam Ard at South Boston, Martinsville, Orange County and Charlotte in 1983.

From a manufacturer’s standpoint, Ford can win its sixth straight race. Though Cindric and Chase Briscoe are the only two Ford drivers in the field, they have combined to win the last five Xfinity events. Not surprisingly, they also are the top two drivers in the series standings, with Briscoe, a five-time winner, leading Cindric by 24 points.

It’s not all about Ford, though. Joe Gibbs Racing Toyota driver Brandon Jones is the defending winner, and he righted his ship with a seventh-place finish last Saturday at Texas after four straight results in the 30s, with three DNFs for crashes and another for an oil line issue.

“For me, this track is fun, because the groove moves up near the wall, so it allows you to move around the track and adjust your line during the race,” said Jones, whose victory at Kansas last year was his first in the Xfinity Series.