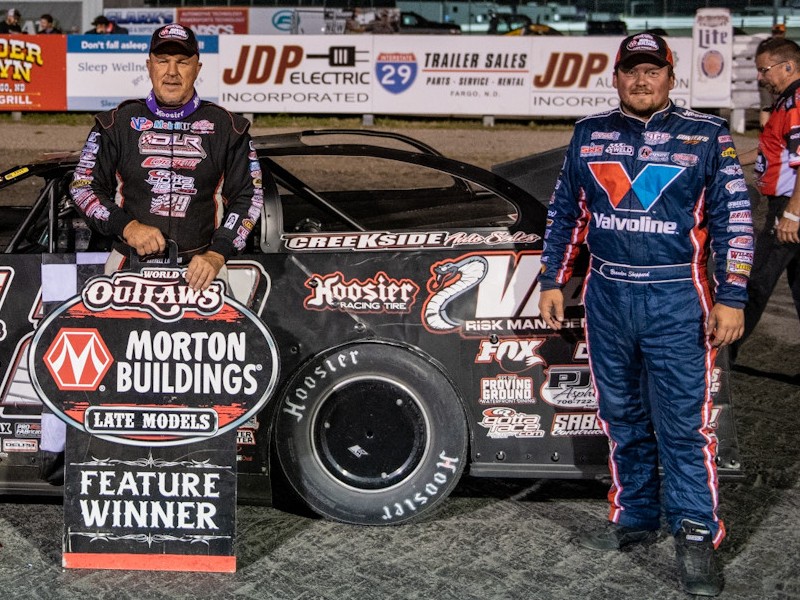 On Sunday night, Lanigan led the final 31 laps to score his first breakthrough win of the year.

Lanigan, form Union, Kentucky, bypassed leader Rick Weiss on lap 19 and stormed his way through lap traffic en route to a 5.831-second advantage at the end of the night.

“This has been a long time coming,” Lanigan noted in his first World of Outlaws win since September 21, 2019 at Port Royal Speedway. “I can’t thank all my guys enough. We’ve all been working so hard these last few months. This is cool. I’m excited for the rest of the year.”

Brandon Sheppard finished in second, with Ricky Weiss in third, Chase Junghans in fourth and Ashton Winger in fifth.

On Sunday night, Brandon Sheppard raced to his 10th series win of the season at River Cities Speedway.

Sheppard powered to the lead on the 32nd lap, then held off a late bid form Cade Dillard to record the 65th series victory of this career.

“This is all so surreal for me,” the New Berlin, Illinois racer said. “I was a kid that grew up at Macon, Farmer City, Lincoln, Jacksonville, and now I’m out here on the road living the dream. Mark (Richards) picked me up and gave me this opportunity to get the experienced I needed at tracks all over the country and that is what got us here to be as consistent as we are.

“I’m just having a ton of fun. In my opinion, we can’t go to enough races right now. Let’s keep going.”

Dillard finished in second, with Ricky Weiss in third, Dennis Erb in fourth and Dustin Strand in fifth.