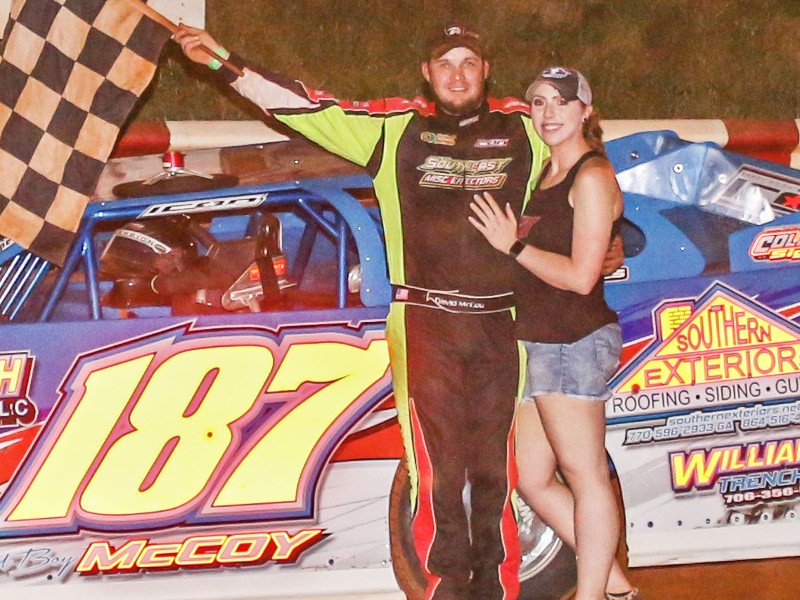 David McCoy made the two hour drive to Georgia’s Winder-Barrow Speedway pay off, as he scored the Limited Late Model feature win on Saturday night.

The Franklin, North Carolina racer led wire-to-wire en route to the victory on the ¼-mile clay oval in Winder, Georgia.

McCoy jumped out to the lead on the drop of the green flag, with John Anderson, Nick Sellers and Will Harris in pursuit. As McCoy moved away from the field, Sellers and Harris battled for third, with Sellers eventually holding onto the spot.

The first caution of the night came around the halfway point when Shane Cox spun in turn two to draw the yellow flag.

On the restart, McCoy again got the jump, but saw the advantage go away just moments later when the caution flew again.

McCoy would take command again on the subsequent restart, and began moving away from Anderson. With just a few laps to go, the race was again interrupted by caution for a spin on the frontstretch.

That gave Anderson one more shot at the leader, but it was all for naught as McCoy moved to the point on the restart. From there, McCoy drove away to score the victory.

Anderson followed in second, with Anderson in second, Sellers in third, Harris in fourth and Dustin Cason in fifth.

In other action, Rod Roberts held off Cade Cagle to score the Hobby feature win, with Kevin Johnson in third, Casey Cagle in fourth and Nick Sellers in fifth.

Tyler Canup took the victory in the Modified Street feature. John Anderson followed in second, with Aaron Criswell in third, Jennifer Everett in fourth and Jordan Poole in fifth.

Ronnie Poole was the winner in the Stock V8 feature, with Evan Brown, Jeff Casper, Tim Corbin and Trey Pilgrim rounding out the top five.

J.J. Garrett took top honors in the Stock 4A feature. Justin Taylor finished in second, with Kyle Walker in third, Elliott Brayboy in fourth and Brandon Cox in fifth.

Derek Lord won the Stock 4B feature, with Charles Earnest in second, Robert Booth in third, Bobby Croya in fourth and Mark Parker, Jr. in fifth.

Drew Griffith was the winner in the Open Wheel Modified feature, with Matthew Wall in second.