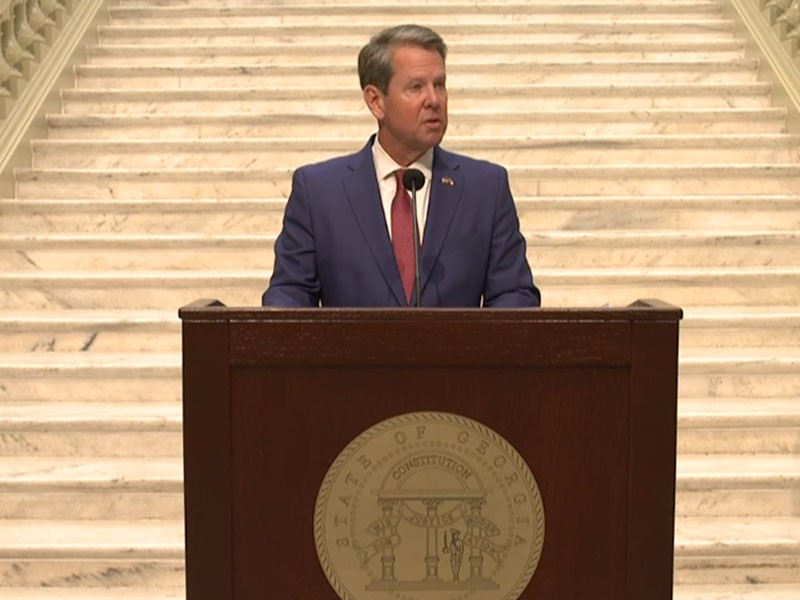 Gov. Brian Kemp on Friday defended the lawsuit he filed against Atlanta's mask requirement, saying Georgians do not need a mandate to do the right thing.

“Businesses are barely hanging on now," Kemp said. "They can’t be some city’s police force. … It sends a terrible message, and that’s one of the reasons I’m continuing to take this position.”

Atlanta, Savannah and about a dozen other local jurisdictions now require residents to wear face coverings in public. Nearly half of the states have mask mandates, including states led by Republican governors. Some states have also allowed local governments to add additional restrictions on top of state mandates.

Kemp's news conference came as cases across the state are rising. Dr. Kathleen Toomey, the commissioner of the Department of Public Health, said 13.6 percent of people who have been tested have the virus, which she said shows community spread. She said the state has seen a 39 percent increase in hospitalizations in the past week.

In a Friday interview on CBS, Bottoms questioned the timing of the lawsuit filed shortly after Trump’s Wednesday visit to the city, calling the litigation “really odd.”

“I pointed out that Donald Trump violated that order when he landed at our airport and did not wear a mask," she said.

She said Kemp “is a Trump loyalist and he seems to work very hard to please the president of the United States, and that is often at the expense of the people in our state.”

She said she intends to fully fight the lawsuit, and she said she believes the city will prevail. Bottoms and two family members are currently quarantining after contracting COVID-19.

The lawsuit came a day after Kemp said cities and counties could not take actions that exceeded what was outlined in his executive orders, including requiring masks. But several mayors who had implemented face-covering requirements, including Bottoms, said they would keep those rules in place.

Despite his objections to requiring face masks, Kemp has been seen in public many times wearing a mask, and he regularly encourages people to wear them. During his news conference, he urged Georgians to wear a mask in public, maintain physical distancing of six feet or more and wash hands with warm soapy water.

He urged Georgians to follow the guidelines when in public, adding that by doing so, people are taking steps to return their lives to normal, including having a college football season.

"The community will defeat this virus, not the government," he said.

The governor also said he soon will announce a plan to improve testing in the state.

Toomey also urged people to wear face masks to help prevent the spread of the virus.

"It's better when all of us are wearing a mask," she said.