Two-a-Days: Wolves preparing for new challenges in 6A 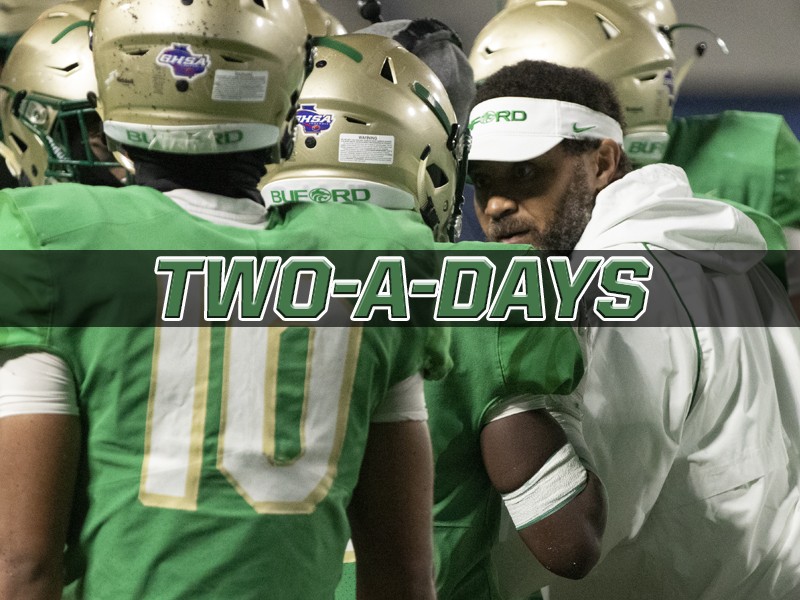 There are just 32 days remaining until the kickoff of the 2020 high school football season. But make no mistake, despite the COVID-19 outbreak, swirling uncertainty since April, and the cancelation of spring practice, preparations for the upcoming campaign have been underway throughout the state since early June. And teams throughout northeast Georgia are in full countdown mode.

The Wolves got back to their old ways in 2019 winning their 11th state title in 18 seasons and doing it in dramatic fashion as Hayden Olsen booted a game-winning field goal in overtime to beat Warner Robins for the Class 5A championship.

But gone is Olsen and a slew of major talent from that group. Add to that the Wolves are moving up to Class 6A and in a region (8-6A) with behemoths, Dacula and Lanier (both semifinalists in the past two seasons) and the 2020 campaign could be one of the more intriguing ones for Buford in recent memory.

We caught up with Buford coach Bryant Appling to see where the Wolves are -- they do return a ton of experience and talent as well -- as they prepare for what may be their most challenging campaign to date.

QUESTION: Coach, no doubt last year was one of those magical seasons. But as you said earlier in this off-season, that is in the past. You lost a lot of talent but y’all do return a lot of talent, with experience, from last year. What do you see as the key to the 2020 season?

ANSWER: The key to our 2020 season is the same as any other season: success lies in your seniors. Your seniors must play the best ball of their careers when it matters most, and they must be a cohesive group that our underclassmen will, and want to, follow. We obviously lost some really talented players to graduation but we feel confident in the group we have returning with a lot of players who saw significant time in key games last year. On offense we feel like we have a really strong collection of talent in our returning running backs, Gabe Ervin Jr.and Victor Venn, along with a group of quarterbacks (Jarvis Evans, Ashton Daniels, Dylan Witke) that all bring unique talents to what we are trying to do to be successful. We will have to replace several key offensive linemen, but return a 3-year starter in Jacob Smith and a returning starter in Caleb Archer. Defensively, we will rely heavily on our only returning starter on the defensive line, Matthew Alexander, to lead the way in the trenches. We do feel like our linebacker and defensive back group is one of the deepest and most talented in the state with seniors Tommy Beuglas, Malik Williams, Brandon Castro, Mason McCranie, and Nick Perry to lead our linebacking core with some juniors who saw significant playing time last year in Victor Payne, Aubrey Smith, and Malik Spencer. They all have played and excelled in big-time moments throughout their careers. The secondary will lean on returning starters Amari Wansley, Jacob Pope, Ryland Gandy, and Malik Williams. Each of these guys is extremely talented and versatile.  As always, we have several guys who have waited their turn behind and really look forward to seeing what they can do as the season progresses.

Q: The move up in classification has given y’all some great new Gwinnett County rivalries, including rekindling an old one with Dacula. How much is the Buford community looking forward to developing some local rivalries for a change?

A: I think the entire Buford community is excited. You always want to be able to challenge yourself against some really talented programs, and some of the Gwinnett teams we get to be in a region with this year are certainly going to be a challenge. I know the Buford community is excited about being able to watch the Wolves compete with these teams in the years to come. I'm sure our players are also excited. These teams have players that our guys have competed against on the GFL fields growing up, or played other sports against, so it's always fun for these guys when they can compete with players they are familiar with.