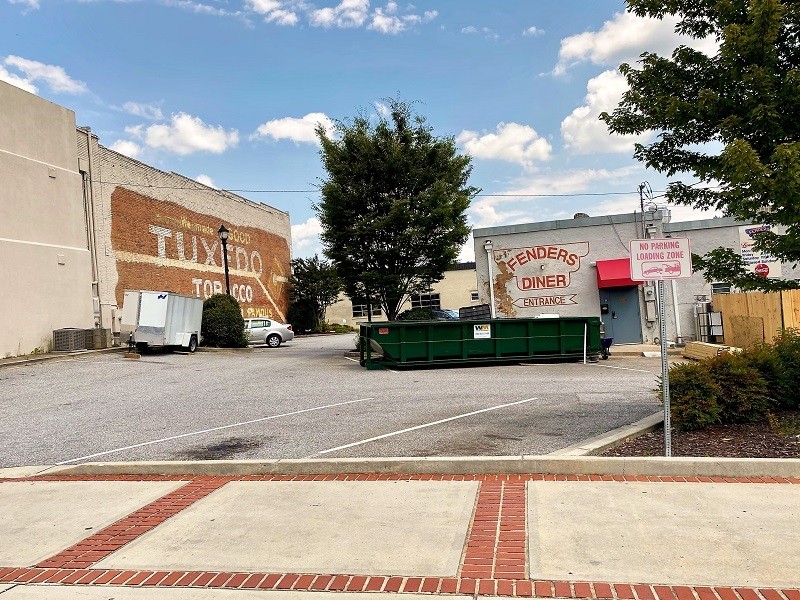 The Cornelia Downtown Development Authority is asking the city to turn over the parking lot between Hodges and Irvin Street over to it for redevelopment as a downtown greenspace.
Rob Moore 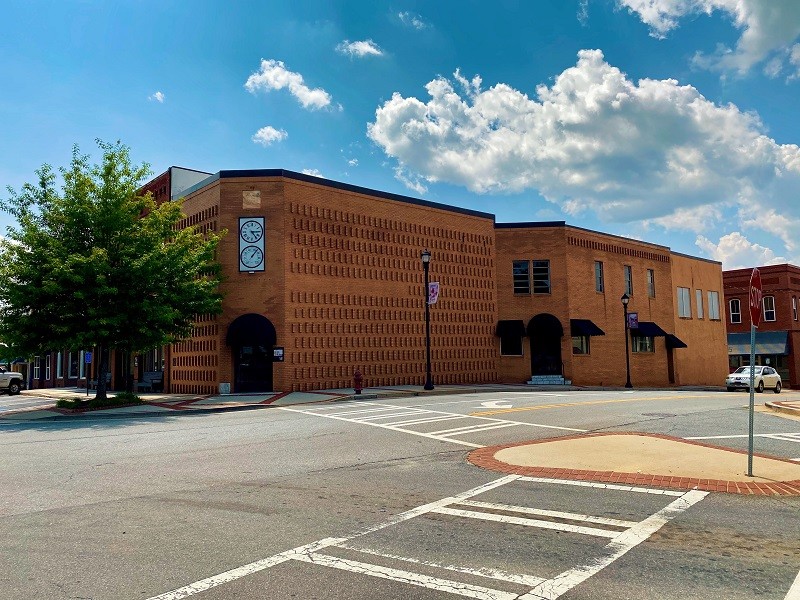 CORNELIA – The Cornelia City Commission has a full agenda for its meeting at 6 p.m. Tuesday, July 7, including public hearings on changes to the downtown landscape.

Two of those hearings involve the immediate downtown area.

“We have two requests from the downtown development authority that we’re going to be considering,” Anderson said. “One is to amend our alcohol ordinance to allow for the creation of what they call an entertainment district. The main bones of it would be like if somebody went to Bigg Daddy’s and they finished eating and had a half a beer left that could be poured into a plastic cup and there would be a certain area of town, which would be designated later if the ordinance passes, that you could legally walk around with open containers. It’s going to be a very small area concentrated right near our core downtown.”

An ordinance under consideration would create an exemption to a section of the municipal code that currently prohibits the consumption of alcohol outside the premises of a restaurant.

The request for the change was submitted by the Cornelia Downtown Development Authority.

Within a downtown entertainment district, any establishment licensed to sell alcoholic beverages by the drink for consumption on the premises is authorized to dispense an alcoholic beverage in a clear plastic cup that cannot exceed 16 fluid ounces.

“Many of the downtown communities across the state of Georgia are designating ‘entertainment districts’ in the historic areas of their downtowns,” according to a letter of support from DDA Chairman Heath Barrett.

In addition to the support of the Cornelia DDA, the city also received letters of support from Partnership Habersham, the economic development arm of Habersham County, as well as the owners of Bigg Daddy’s Restaurant and Tavern, Common Ground, Fenders Diner and a new restaurant under development downtown.

“As the owner of both Fenders Diner and another new restaurant we’re developing in the old bank building a few doors down, support for this initiative is one of the reasons why we’ve invested in this city,” states a letter from Jay Reeder. “I’ve been working with a restaurant development team and coordinating with the mayor and others in Cornelia hoping to create destination venues in the business district of Cornelia that would help attract visitors. Ultimately, our goal is to drive people into the historic business district as a destination, which will in turn increase tax revenue and attract other business development to the historic downtown area. These goals were inspired by discussion of the potential for an entertainment district.”

All those making the requests said they want to see Cornelia’s downtown district grow and thrive.

“Attracting good businesses and great restaurants will be the catalyst for more business and a thriving downtown area,” Barrett’s letter states.

Change of parking lot to greenspace

The Cornelia DDA also is requesting a change in use for the parking lot located on Irvin Street between Fenders Diner and Arnold Drug Co.

“The second one is to consider a request from the downtown development authority for the city to give them the property between Fenders and Arnold Drug that runs from Irvin to Hodges Street so it can be used as greenspace,” Anderson said.

The property was identified in the DDA’s 2020 work plan as a possible location to create greenspace in downtown.

“All of our restaurants, our two existing event venues and the five prospective businesses that are currently looking to locate in our Central Business District could benefit from having the greenspace in this location,” a letter from DDA Chairman Barrett states. “The location is also ideal because it would be inside the proposed entertainment district.”

The parking lot in question includes 15 parking spaces, but the city recently acquired a parking lot to include in the Appletree Alley StreetScape that will add 30 new spots to downtown.

“We think on Irvin Street, once we bring that sidewalk all the way across, there will be at least four or five more angled parking places,” Anderson said. “We just purchased a portion of the parking lot behind the dentist office there [on Hodges Street] – Dr. Cantrell – that I believe has got 30 or 40 parking spaces.”

A redevelopment project south of the railroad tracks also will yield additional parking opportunities for the downtown area.

“With the new city hall project, there will be 87 parking places added between two new parking lots that are being constructed, so we don’t think giving up the parking will be an issue and according to the renderings I think it will definitely be a vast improvement on downtown,” Anderson said.

The commission also will hold a public hearing on a conditional use request from E-Full Glory LLC for a duplex at 252 South Wayside Street.

At some point, the building at that location was converted to a triplex, which is not allowed in the B-2 zoning district.

The structure, owned by Chee Wong, caught fire earlier this year and requires substantial repairs, according to the agenda report prepared by Anderson.

“We have been unable to find a record of when the property was converted to three units and since this is not allowed in this zoning district, we will not issue permits for the repairs,” Anderson’s report states. “The owner has decided to convert the structure into a duplex, which is allowed as a conditional use in this zoning district.”

The property is located across from Garden Gates Drive, where other duplex units are located.

Additionally, the commission will hear a request from residents of Foster Street and Edwards Street for the city to install speed bumps.

The city received a petition signed by 21 residents on the two streets. The speed limit on those streets is 25 mph.

“Unfortunately, I think we had the original public hearing scheduled for March or April, but because of coronavirus we had to push it,” Anderson said.

The commission will precede the meeting with a work session at 5:30 p.m.

The work session, meeting and public hearings will be held at the Cornelia Community House, 601 Wyly Street, Cornelia.