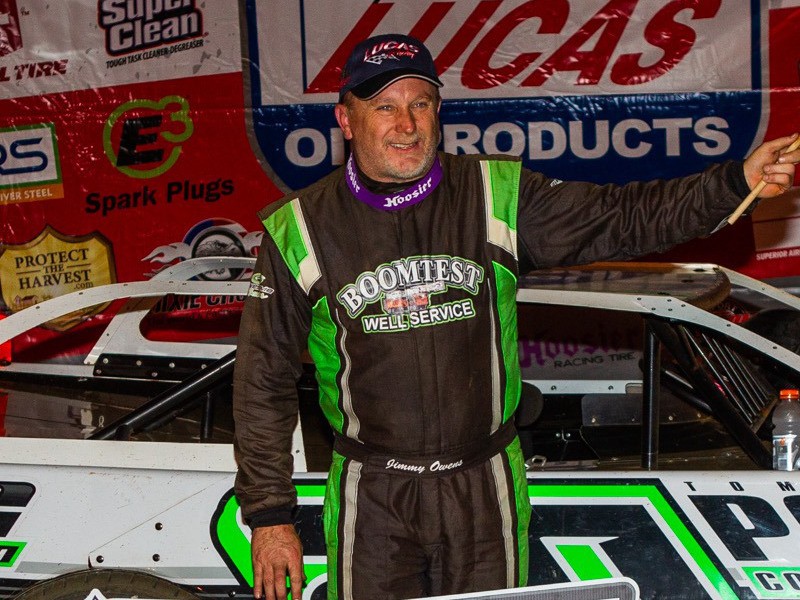 The Newport, Tennessee speedster recorded wins at 411 Motor Speedway in Seymour, Tennessee on Friday night and at Talladega Short Track in Eastaboga, Alabama on Saturday night, moving his all-time series win total to 69.

On Friday night, Owens scored the win at 411 Motor Speedway in dominating fashion, as the series points leader led all 50 laps en route to the win.

The final caution of the race flew on lap 49. On the restart of the race, Owens pulled away once again from fellow Tennessee racer Cory Hedgecock, who finished second to Owens. It was a best career finish in Lucas Oil Late Model Dirt Series competition for Hedgecock.

“This car was just on a rail tonight,” said Owens. “You know it’s just been on a rail for the last month or so and I need to thank my crew Mullet, Cody, Kurt and my family. It’s been awesome so far this year. If we don’t win another race this year it’s been one of the greatest years ever so far. Vic (Hill) and I have gotten along from day one. He has helped us ever since no matter whose motors we’ve run. He has always been kind and helped lend a helping hand. Thanks to him for keeping us in tuned.”

On Saturday night, Owens added to his win total in the series first race at Talladega Short Track in 12 years.

Owens took the lead at the start of the race with Hudson O’Neal quickly moving from his fourth starting spot to second. O’Neal ran in second behind Owens until he slowed on lap 8 and exited the race. Jonathan Davenport moved into second place where he would stay until a caution flew for him with 31 laps scored.

Richards became the third different driver to run in the second spot behind Owens. A caution with10 laps to go bunched the field up, but for the fourth series race in a row, Owens went on to the victory.

“Once again, the car was flawless all weekend,” said Owens, “My hats to the crew and Dale McDowell for prepping the track this week. They watered the track and gave us a racy track for a long time. It’s great to come home with a win for Pope Construction, they are just up the road from here. He has helped us for years. I am just glad he could be a part of it and be here with us. I don’t think I have ever been here where I haven’t run off the corner in one and two. I am glad the fans stuck it out and I’m glad the weather held out. Hopefully, we can keep it going.”