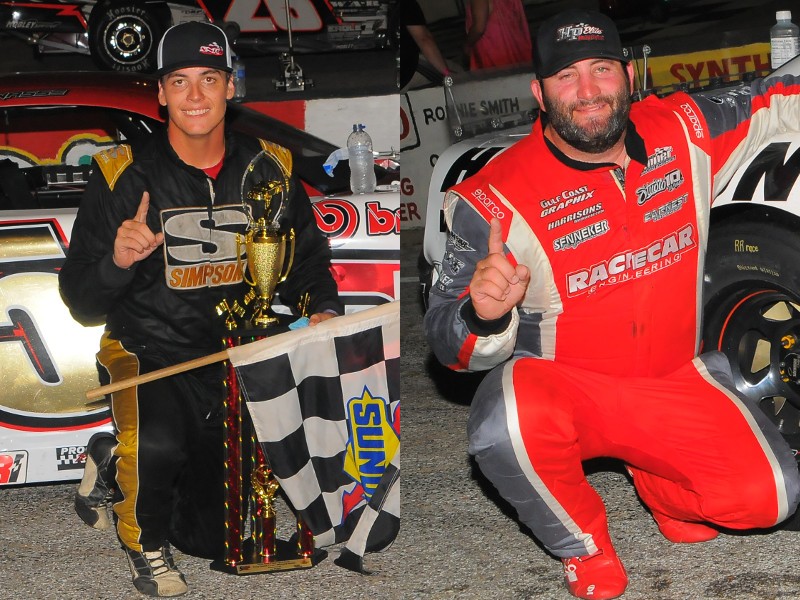 Stephen Nasse and Bubba Pollard both visited victory lane at 5 Flags Speedway in Pensacola, Florida over the weekend.

“They definitely made me work for it at the end,” said Nasse, whose victory earned him a $10,000 pay day. “Through all the things we’ve been through here recently, this feels good. What I love about this team is they work their tails off. We’ve got a lot more coming.”

Hunter Robbins led much of the race but couldn’t hold off Nasse passing him on the inside lane on lap 65. Robbins, back driving full-time for the first time in five years, finished runner-up driving for Georgia Racing Hall of Fame member Ronnie Sanders.

Bubba Pollard settled for third, piloting the No. 11 in honor of David Rogers. Jeremy Pate followed in fourth, with Carson Hocevar in fifth.

Pollard and Rogers were as close off the track as they were on it.

“It was always cool to hear stories about how (Rogers) raced back in the day,” Pollard said earlier this week of his friend. “He had all this knowledge. When David spoke, you listened. I’d take in everything he was saying – whether it was life or anything.”

On Saturday night, Pollard was determined and methodical in capturing the victory. The 33-year-old passed 15-year-old Jake Garcia on lap 74 and cashed a $15,000 payday.

“This is special. This is for David Rogers and TM Ranch,” said Pollard, who started eighth. “It has been a long, hot weekend, and it’s just awesome to see all the fans. We ain’t gotten to race much, so racing in front of crowds this size is incredible.”

Garcia, from Monroe, Georgia, led nearly 30 laps on Saturday and kept Pollard honest for a while in the final 26 laps, but ultimately the teenager finished second.

Marietta, Georgia’s Kyle Plott started on the pole Saturday night and led the first 47 laps before mechanical troubles sent him behind the wall. That’s when Garcia took his turn at the front.

Pollard, meanwhile, avoided trouble all around him and gradually moved his way through a cluster of cars that separated him from Garcia.

“We just got behind there for a minute,” Pollard said. “I didn’t know if we would make our way up through there. But the car was really good. Jake’s a good racecar driver. He didn’t make any mistakes and my hat’s off to him for the way he drove.”